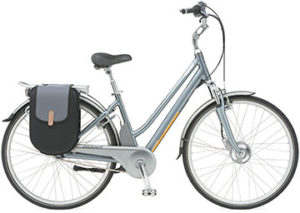 “My Prius gets WAY better miles per gallon than your car!”. The green bragging that is going around is great! Some people have really taken going green to keeping up with the “Jones’s” (or your neighbors). Well if you really want to take it to the next level why not say ” My electric bike doesn’t even use gallons of gasoline!”

Electric bikes are really one of the lightest electric vehicles around. From a pure physics perspective you can imagine how much less energy it takes to move around a 60 pound electric bike versus a 3,563 pound car.

So even if we were to compare the electric car to the electric bike it is still a huge difference in electric energy required to move them around. Oh yeah, and with an electric bike you can add a little human power to increase your “watts per mile” and improve your health with a little exercise :).

Where the electricity for your electric bike comes from may not be the cleanest source so you may have to adjust your bragging a little. What is cool though is that electricity is the universal “fuel” that can be generated from renewable sources. For example: solar, wind, and some might say hydro-electric.

There are also small solar or wind power generating options for use right at you house, which is the most efficient way to get your electricity. Imagine creating all the power you would need for your electric bike at your house. Now that is some serious green bragging rights!

Personally I like to mention or “brag” that my truck has been sitting in the driveway for months. I do carpool with my wife to run some errands, but for the most part I am able to get by without a car in the spring, summer, and fall in Flagstaff (The snow during the winter makes bike commuting a little tough :)). Overall I enjoy the fact that I am not spending my money on gasoline and I don’t mind mentioning it to people.

If you really want to take it a step further you could ride a traditional bicycle or walk everywhere. Compared to those options the electric bike is a nice way to get around quickly and not have to worry about large hills and getting too sweaty.

Public transportation is also a nice option but doesn’t quite have the freedom and flexibility that cruising around on an electric bike can provide. There was a statistic that was floating around on the Internet that electric bikes are more energy efficient than riding the bus, but I haven’t seen the numbers to back that up yet.

So if you are looking for a new way to step up your green bragging or just start, I think that the electric bike is a great way to go. Make your friends envious as you pull up on your super green electric vehicle :).

What do you think? Would you like to have an electric bike for the green bragging rights?