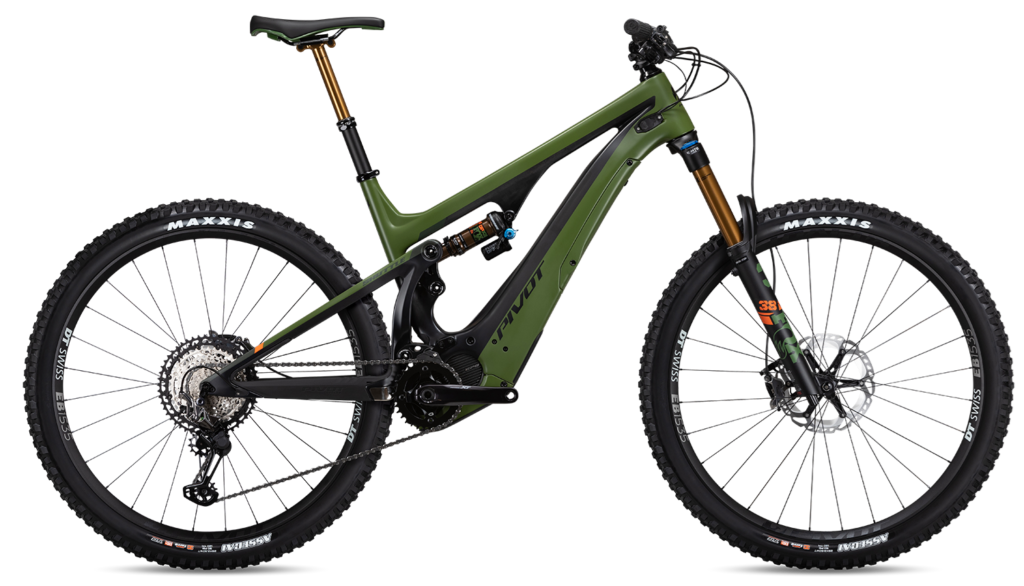 The new Pivot Shuttle is here, now with Shimano’s latest and highly rated EP8 motor and a larger 720Wh battery. It features a full carbon frame as the original launched back in 2017 also did. Following the latest trend on e-mtbs it has a new ‘Trail’ mode, which, unlike the other modes, does not use a set assist ratio, which varies according to speed, gradient and rider input  – the full 85Nm of torque is available in  Trail mode when needed, but the power level will back off in less demanding situations.

As you might expect from a bike with such a top-of-the-line spec, price is at the very upper end too with an RRP of US$10,099. Back in September we reported on the launch of two new city bikes bearing the name of US racing legend Greg LeMond. The Daily and the Dutch – more details are now emerging ahead of slated availability for January and February 2020 and 2021. The Daily has become the racier sounding Prolog but both models remain city bikes powered by the neat rear hub motor system the Mahle X35+.  Perhaps most eye-catching is the use of what appears to be relatively affordable carbon fiber frames on both models which are stated to weight around 27lbs / 12kg.

At the start of 2020 it was reported in Composites Today that independent testing of LeMond’s carbon material by Deakin University in Australia found this new manufacturing process to lower production costs without compromising quality – the LeMond website doesn’t specify the source of the carbon fiber used in the production models, however.

Prices and shipping dates are US$4500 fro both models and Jan 21 for the Prolog and Feb 21 for the Dutch.

There have been LeMond branded bikes in the past but none appear to have proved to be a really long term success; will LeMond e-bikes prove to be the final breakthrough for the three time Tour de France winner? The ENVO is a ski-ebiking retrofit kit…

If you do take a look at the ENVO Electric SnowBike Kit.

It’s essentially an electric retrofit kit that replaces your front wheel with a single ski and the rear wheel with an electric caterpillar drive system. Top speed is 18mph and is priced between CAD$2789 (US$2145) and CAS$3684 (US$2833).

ENVO also offer a Snowkart and a line of regular e-bikes. The DXF lock from Hiplok have paired their DX U-lock with ‘the unique new speed-loading frame bracket for carrying your lock on your bike. This new rattle-free, reliable and sturdy mount uses their patented “CLIP+RIDE” system to attach the lock to the bracket for a steady hold in transit.’

The bracket bolts directly to the bottle holder mounts found on most bike frames, which Hiplok says is a massive improvement on existing U-lock brackets which can be difficult to position and prone to loosening, and noisy while riding.’

The DX Lock itself features a 14mm hardened steel shackle and double locking mechanism to help keep your bike safe. Additionally, it’s one of the lightest U-locks on the market to garner a “Gold” rating from the independent testers at Sold Secure. I Tried An E-Cargo Bike For 30 Days And Didn’t Need to Touch My Car Once – so runs the headline on this inspiring article from the Streetsblog USA article. It documents how Kea Wilson trialled the Radpower’s Rad Wagon to do everything from fully loaded climbs to ginormous grocery hauls. As the author says:

‘The payload for the whole bike is 350 pounds including the weight of the rider; I pushed that rear-loading limit a few times, but, for the record, nothing broke.) With a couple of super-sized Ortliebs, some basic straps and the help of a simple front basket, I was able to haul enough groceries for a whole month — including a month’s worth of toilet paper.’

Kea also notes ‘with a couple of cheap accessories like running boards and some hand grips in the back, you can fit two full-grown adults on a single Rad Wagon.’

She wasn’t so keen on the heavyweight of the bike or what she felt was a range that wouldn’t stretch to bike camping beyond the city limits.

‘Still, despite those small drawbacks, the Rad Wagon easily helped me meet a range of needs that otherwise couldn’t be comfortably accomplished on two wheels. Over the course of my 30 day e-bike experiment, I replaced 76 miles of trips that I almost certainly would have driven with electric-assisted bike rides — it probably would have been more, but, y’know, coronavirus — and didn’t touch my Dumb and Mostly Useless Toyota once.’

Elektroheads say they cover ‘everything electric, including Tesla, EVs, EUC, Eskate, Onewheel, Electric Scooters and Electric bikes.’ They have been in touch to let us know about their video covering some of the choicest e-bikes from London retailer Fully Charged.

Streetfilms again, this time with a report on ‘a great “new” law on the books that allows bicycle riders to also legally use pedestrian signals to get a 5 to 10 second head start on drivers in NYC’.

Why is it important? Anything that makes it easier for cyclists and e-bikers to get clear of traffic at a junction – notable danger zones in terms of where bike accidents are more likely to happen because of the risk of ‘right hooks’ – must be welcome news. This is something continental Europeans recognized years ago, with signal lights allowing cyclists a head start at many junctions over there.

How does it work? Check out the Streetfilms video on the idea of Leading Pedestrian Intervals: Bikes and e-bikes are currently allowed in French bus lanes like this one in Paris, but in future you may also see electric mopeds and electric three wheelers.

‘Owners of electric two and three-wheelers are technically authorized in France to travel on bus and taxi routes, according to a new decree issued by the government. It is an additional incentive to push the French to go electric. But it will be the local authorities who decide on a case-by-case basis whether or not to authorize access to these lanes reserved for VTFEs (low emission vehicles).’

Who is the ‘Typical’ eBike User?

A couple of recent surveys have looked at this question. The majority (almost 75%) of electric cycle buyers are to be found in the three following age groups:

Most popular e-bikes by type are:

Meanwhile eMountainbike magazine’s reader study found that 49 was the average owner age, 4,593 euros the average value of bikes currently owned and the average age of eMTB owned was only 21 months.

MMB reports on the kickscooter and e-scooter market in the UK as a great potential opportunity for the bike trade there. They report:

‘……this market, which is predominantly made up of electric and non-electric scooters, has followed the wider cycling industry in enjoying strong growth in 2020. For the first three quarters of the year, sales value in the sector was up 41% compared to 2019.

The data comes from the Bicycle Association (BA) Market Data Service, powered by Sports Marketing Surveys (SMS), which captures cycling and micromobility sales from over 60% of the UK market on over 700,000 individual SKUs.

Overwhelmingly, this growth is being driven by electric scooter sales, where not only have volumes of units shifted risen sharply, but the average sale price has also increased by around 80%. The combination of those dynamics has pushed sales from £7 million to almost £23 million in the BA’s data sample for the first nine months of 2020.’

In particular the decision to allow bike shops to remain open as ‘essential’ businesses means many e-scooter sales may have migrated there from businesses that were closed says the aricle. The UK’s eBiketips reports that ‘Micro-mobility firm, Voi, has raised £120m as it seeks to establish itself as the biggest operator in the European e-scooter rental market. The firm is now operating in six UK areas (officially sanctioned public rental trial areas – use of private scooters on public highways is illegal in the UK) and has secured licences for a further 10.’

Bikebiz reports that ‘The 29th edition of Eurobike has been scheduled for 1st-4th September 2021, organisers have announced, taking place as a combined trade fair and public trade show in Friedrichshafen. Eurobike 2020, which was due to take place from 24th-26th November, was cancelled due to COVID-19 restrictions.’

Magnets for the UK?

The magnets found in e-bike motors – and in a host of other traction and electrical generation devices – are rare earth magnets. Adding rare earth elements to the magnet manufacturing process makes them extra strong. China currently has a quasi-monopoly on rare earth element production but it seems moves are afoot to try and make the industry less reliant on China.

The UK’s The Business Desk claims that ‘A Humber site has been chosen as the proposed location for what would be the UK’s first rare earth processing facility. Exploration and development company Pensana Rare Earths says Hull’s Saltend Chemicals Park has been selected, in order to create the world’s first fully sustainable magnet metal supply chain.’