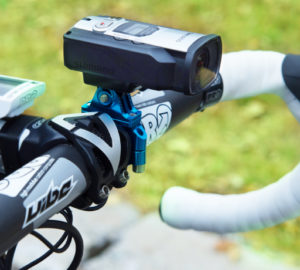 Bicycle video cameras are an increasingly popular accessory with cyclists and e-bikers alike.

They have provided some epic action footage and can also mean real time souvenirs of some epic, once-in-a-lifetime journeys on two wheels.

Their ability to capture the behaviour of other road users is also coming into focus as online footage of road incidents often get enormous viewing figures.

Indeed, there is also increasing evidence that they can actually play an effective role in helping police the roads and make them safer for cyclists.

You might also see them called adventure cams or action cams but along with cyclist cams all are variations on a theme; miniature cameras you can attach to your helmet or bike that will record high quality video footage and let you play it back later.

Some also come with other features such as GPS tracker and the ability to wirelessly connect to things like a heart rate monitor and cadence meter for those who want to combine video footage with a performance tool.

But there are also very simple ‘video-only’ models at a very reasonable price.

There are several ways cycle cams are starting to help make the roads safer for cyclists and indeed all road users by helping prosecute the bad or deliberately injurous behaviour of others.

The USA – the ‘Hit and Trace’ and a Deterrent

There are several instances of bike cams helping to trace and secure the arrest of offenders.

This incident on Tennessee’s well-known Natchez Trace meant an appeal via social media helped identify the driver (though see below for UK advice on why you shouldn’t do this there…).

This NYT article details how a collision in Washington D.C. lead to bike cam footage being handed over to police and the Attorney General’s office issuing a charge of leaving the scene of an accident.

It also details how some riders believe the visible presence of a bike cam can stop harassment.

This Bicycling article details many more instances of how cameras have been able to help cyclists track down perpetrators of road crime but it also also highlights some of the difficulties of getting footage taken seriously, stating ‘too often, video evidence from cyclists is ignored by overwhelmed police departments, particularly in cases where there’s no injury or other crime committed.’

It also gives helpful tips on filming and information gathering:

– Front and rear facing cameras used simultaneously can be useful in capturing the most comprehensive detail which is one thing police departments may consider if wanting to prosecute (two cameras being more likely than one to capture significant details like license plate, driver’s face and the pattern of driver behaviour before, during and after any incident.

– Bike cams can also be helpful in showing the cyclists own behaviour as a pattern of careful and correct road riding will help any case.

The USA – the Wider Picture

The above Bicycling article also details how the use of cycle cams can feed into the wider safety picture, with cycling advocates across the country compiling footage of various incidents to show both law enforcement and city planners the need for greater enforcement and changes to city infrastructure.

As one contributor to the article says, ‘It’s amazing how much more effective and efficient advocates can be when they can present actual video to law enforcement officers and planners…..Having that footage takes away many of the ambiguities associated with “he-said, she-said” complaints and lets everyone dive right into substantive discussions about behavior, choices, laws, infrastructure, education and appropriate enforcement responses.’

Aggregating large numbers of camera footage is the idea behind the Close Call database, which according to this Velonews article, aims ‘To get ….eyes and ears out on the road, you’re encouraged to become a database member, either by logging in to the site with Strava or registering with the database. As a member, you will receive reports of close calls posted by other members, and you can also post reports of your own close calls. The site also relays these close call reports to local police…….the site establishes a virtual “paper trail.” If a dangerous driver is reported, and then in the future injures a cyclist, the prior report[s] of aggressive driving against cyclists will work to counter any claims by the driver that the injury was just “an accident.”

Ultimately Close Call may mean a paper trail can be built to show patterns of dangerous driving which can lead to a successful prosecution.

The UK – Police and Cam Manufacturers Showing a Way Forward?

The author of the Velonews article, cycling lawyer Bob Mionske says ‘It may take time, but getting these bad apples off the road will go a long way toward making cycling safer for all of us’ but he also admits ‘the Close Call Database isn’t likely to change the behavior of aggressive drivers.’

But changing driver behaviour is exactly what West Midlands Police in the UK appear to be doing.

The use of cyclist cam footage is just one element in their campaign to protect vulnerable road users that, according to this article has seen reports of close-passes halve in the West Midlands since the start of #OpClosePass and the number of cyclists seriously hurt in collisions fall by a fifth – against a backdrop of increasing numbers of people cycling on their roads.

West Midlands Police successfully used the footage below to get a conviction for the very dangerous close pass featured.

#OpClosePass also sees plain clothes police officers pedaling busy roads on the lookout for motorists who pass too close for comfort, pulling them over and offering road-side education to many but also taking the most serious offenders to court – the force has prosecuted more than 400 motorists using video footage provided by the public.

There are also other encouraging signs from other UK police forces.

Several others have since adopted the close pass scheme and many are also signed up to the Nextbase camera portal which allows cyclecam and daschcam footage to be directly uploaded to the relevant police force to allow them to review it.

The portal was launched last year and there’s plenty more detail about it in this Cycling UK article and also about a Welsh equivalent here.

Cycling UK are pretty positive about the role cycle cams can play, especially in the face of a declining police presence on UK roads:

‘One of the factors pushing people to use cycle cams has been the decline in road traffic policing, with a 48% reduction in traffic police officers outside London in England over a 10 year period….it’s sad that the absence of a visible roads policing presence has led many to think that they had better record their own journeys so they have evidence if something happens. Having said all of that, people using cycle cams has enabled people to report incidents, and drivers to be successfully prosecuted, in circumstances where, without the camera evidence, it is highly unlikely that there would have been a successful if any prosecution. They have therefore had a positive effect.’

– You don’t need 4k files, to be able to read a number plate. HD (1920 pixels by 1080 pixels) would be great and even if the resolution is lower then it may still be legible. If in doubt about your camera’s capabilities perform a trial run and review the footage yourself; clearly if the ‘camera operator’ can read the number plates, so will the police.

– It’s not a sensible idea to post the material online or share it publicly if you’re intending to report it to the police for possible investigation. Whilst the police can still investigate and prosecute in cases where material has been shared or posted online, the reality is that most forces are extremely reluctant to do so, and many have a policy that they won’t consider video evidence that has been shared online.

– Make the police’s job as easy as possible when submitting video evidence. There’s no point sending a file with one hour of footage asking the police to look through it and let you know what they think. Neither is it worth sending a four second clip that doesn’t show the context. As a rule of thumb, it’s helpful to send a video which shows a minute or two of footage leading up to the incident, to put the event in context, and a minute or so after the incident, but pointing out in a covering note / email that the incident the police need to look takes place between two timed reference points on the video.

– You can submit cam evidence in relation to any offence. Typically that’s careless or dangerous driving, but it could be driving whilst using a mobile phone, driving with a headlight not working, a vehicle in a dangerous condition, or opening a car door so as to endanger someone. Anything which is potentially an offence is something cam evidence can be used for.

In other words, whilst safe and segregated cycle lanes are the best approach to road safety, where cyclists and motor vehicles do mix cycle cam footage can have a role to play in making the roads safer.

Intriguingly this Science Daily article describes how the use of cycle cams and sensors can be used as a research tool to actually engineer safer roads and cycle lanes.

Here’s just a brief selection of action cameras that are marketed as being suitable for use on bikes (as well as other action sports in some cases).

Cycliq stress the safety angle of their front and rear mounting cameras.

Used together, not only do they give you very wide ranging viewpoint coverage which could be important in the event of a crash, they double as your lights, saving space on the seatpost and bars.

They claim to be the ‘black box’ of bike cams as they respond to any violent motion as might be occasioned in a crash by ‘locking’ the footage into the cameras memory so it cannot be erased later in the ride.

There are many variations on Garmin’s Virb action cam but this particular model is often picked out as suitable for cyclists.

It offers 1080p HD recording and a high resolution full colour screen. It has a waterproof IPX7 rating and an estimated three hour battery run time. Helmet or bar mounting.

If you want something packed with even more technology that makes state-of-the-art claims for itself then check out the much pricier $399 Garmin Virb Ultra 30.

It even has GPS capability and the ability to connect and time coordinate video footage with the likes of a heart rate monitor. Battery life looks a little short though.

The Hero 7 range is the current iteration of this long running and well-respected brand of action cams.

For the low down on all the technical detail see the above link that lets you compare all the features of the various models. They start at $197. 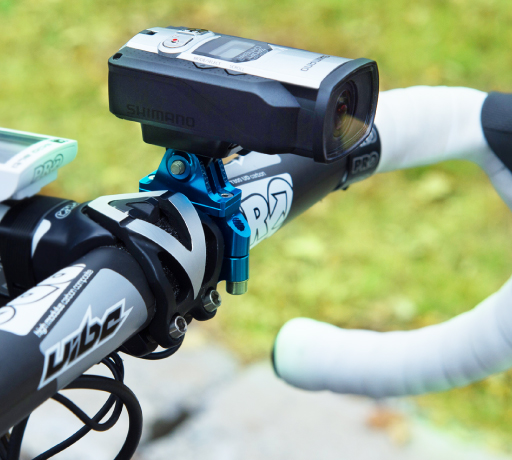 These models are waterproof and dustproof and offer various ANT+ connectivity to measure the likes of heart rate and cadence. Can be helmet and bar mounted. They start at $149.