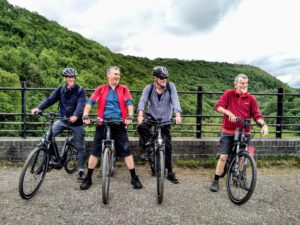 Last week a group of four men with artificial hearts completed a 27 mile ride on e-bikes on the Dark Peak 3 Reservoirs Cycle Trail in the UK Peak District.

Collectively they call themselves The Cranks Electric Cycling Club and regularly ride 20-30 miles together.

They are either waiting for new hearts or enjoying life to the max with no hope of one.

Electric Bike Report spoke to two of them, Ian and Bob. 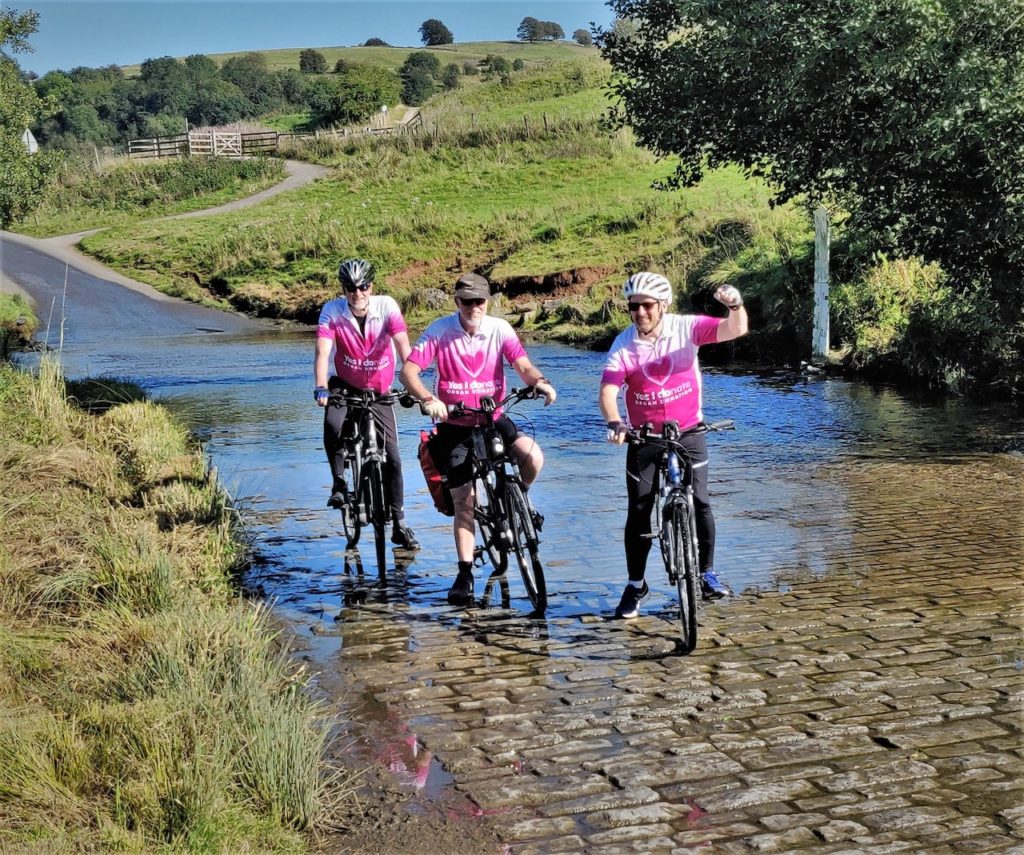 Ian, 56, used to be a teacher of outdoors and adventure sports specializing in taking kids with special educational needs out rock climbing, caving and rappelling, out in the wilderness.

He had no family or personal history of heart problems. He was rock climbing with his son in Snowdonia on the 28th August 2017 when he had a massive heart attack.

They were on a scree slope so it was deemed too dangerous for an initial helicopter rescue, and instead it took nine hours for the mountain rescue teams to get him to a helicopter and then hospital.

This added strain on his heart may have led to complications as once a stent was fitted and at home, he was diagnosed with severe heart failure.

Ian recounts, “The heart was very badly damaged with lots of scar tissue and dead tissue, and I was put on the heart transplant list.”

His condition worsened while on the ‘urgent’ waiting list and he was deemed too unfit to undergo a transplant.

There was a short window of opportunity to have Left Ventricular Assistance Device (LVAD) fitted to save his life. This is a sort of pump that helps the heart.

The pump is powered by two external 14 volt batteries during the day and by mains electricity every night – an LVAD user has to plug themselves in when they go to bed.

For Ian, the LVAD experience hasn’t always been too comfortable. The kit including batteries and an internal defibrillator weighs around 12lbs and must be carried everywhere.

Wiring goes through a permanently open wound in the abdomen known as a ‘fistula’, and the LVAD user cannot for example have a bath or a shower but must rather carefully hand-wash.

To add to his complications, Ian has an internal defibrillator. He says, “The defibrillator fired twice within a month quite randomly. I just sat there watching the TV and suddenly I was given a massive jolt of 800 volts. I saw a blue flash, heard a loud crack, and levitated out of the chair a good six inches!”

Initially he didn’t know it was his internal system and genuinely thought it was the phone charger or that his armchair had somehow been attached to the mains, not the kit installed in his chest!

These experiences and others left Ian quite down and unable to leave the house except for hospital visits.

He describes a form of PTSD where flashing lights freaked him out thanks to his defibrillator incidents. 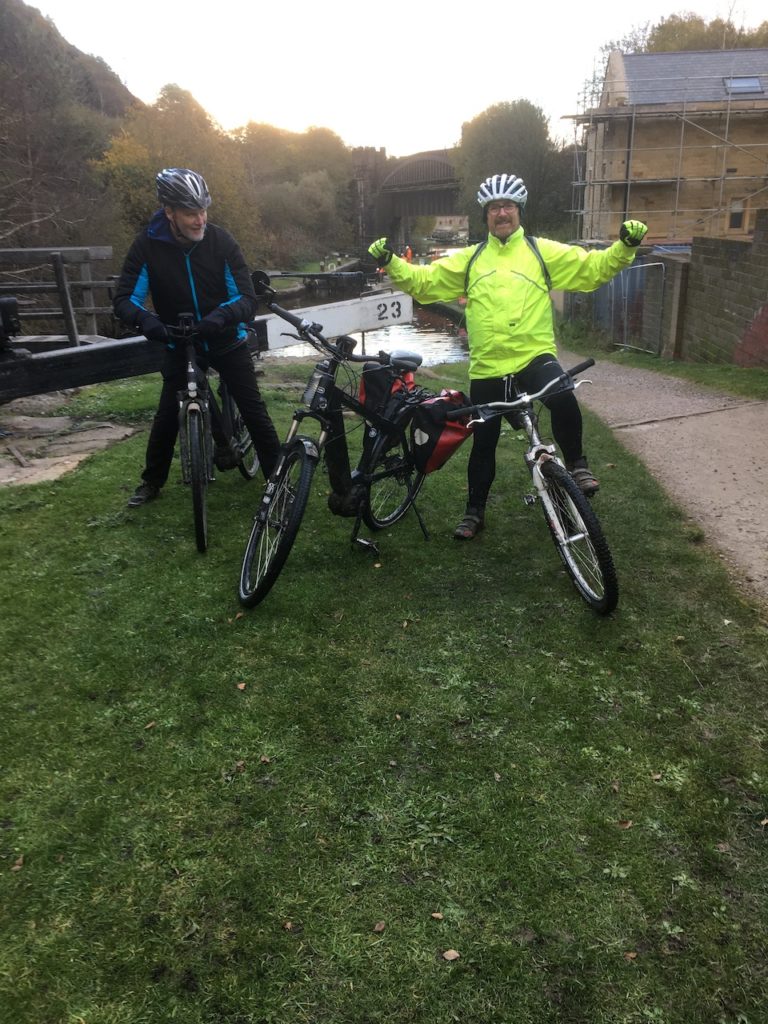 Like Ian, 66 year old Bob lives quite close to Wythenshawe Hospital in Manchester, one of the UK’s main heart transplant centres of excellence.

For the former children’s social work manager, he had a more typical entry to the world of needing a new heart – he was diagnosed with genetic cardiomyopathy, a degenerative illness where the heart enlarges and weakens until it can pump no longer.

Come November 2017 he was taken into hospital and was told that he needed a new heart or he would die. He was too ill for a transplant so had an LVAD fitted.

The psychological impact on Bob was powerful too – realising that he was relying on someone else dying in order for him to live and that he too may not survive even if a new heart was given to him.

The process of recovery was a hard road, even with the artificial heart. Bob was a regular cyclist and even while waiting for the LVAD operation was thinking of an e-bike to get about. 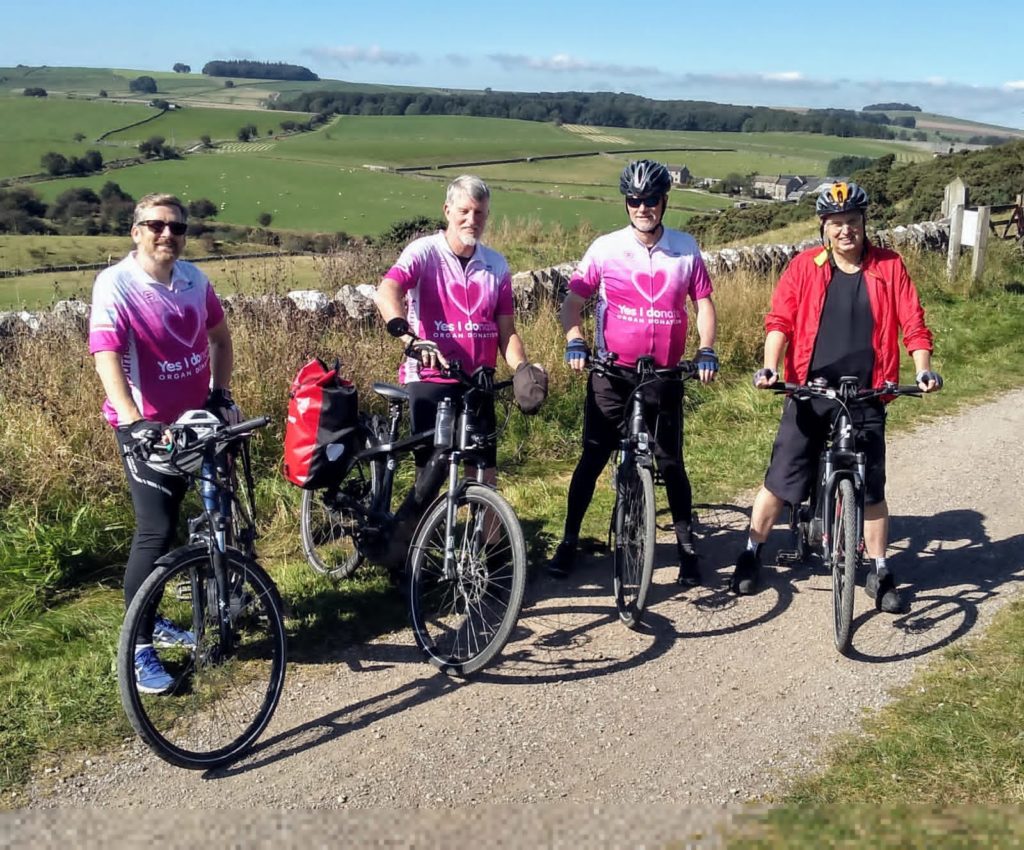 A Community of Mutual Support

One of the key workers in the army of experts involved in helping people recover from major heart problems is the clinical psychologist.

The Wythenshawe Hospital psychologist has set up a regular coffee morning for LVAD and heart transplant patients where people in the same boat could laugh, chat, commiserate and share their experiences.

Bob explained, “One of the other LVAD patients had already bought an e-bike and I stepped up my research. In November last year I was in York where there were a number of bike shops and my wife talked me into test riding a couple.”

He bought a Riese & Müller Charger e-bike, that he says “has a constant variomatic gears in the hub and is good for all the riding that I do!”

He and the other existing e-bike rider got to talking to their fellows at the LVAD coffee group about their purchases.

According to Bob, Ian was one of the most interested, with his inability to get doing all the sports he used to enjoy but yearning for the Great Outdoors.

Ian first of all rented out e-bikes, riding with his daughter on flatter routes.

He recounts, “My daughter said, ‘This is the first time I’ve seen you smile since your heart attack’”

For someone who sometimes struggles with breath getting up the stairs in his home and faints simply by standing up too quickly, he found he could cycle for miles and miles, even up some hills.

Hooked, Ian would buy himself a Raleigh Centros hybrid e-bike.

Bob lives at the top of a hill above a small town in Lancashire. Thanks to his condition, before his e-bike he was extremely limited as to where he could go.

He now finds himself able to cycle into town and home with a decent load of shopping on his bike. It has bought him his freedom. 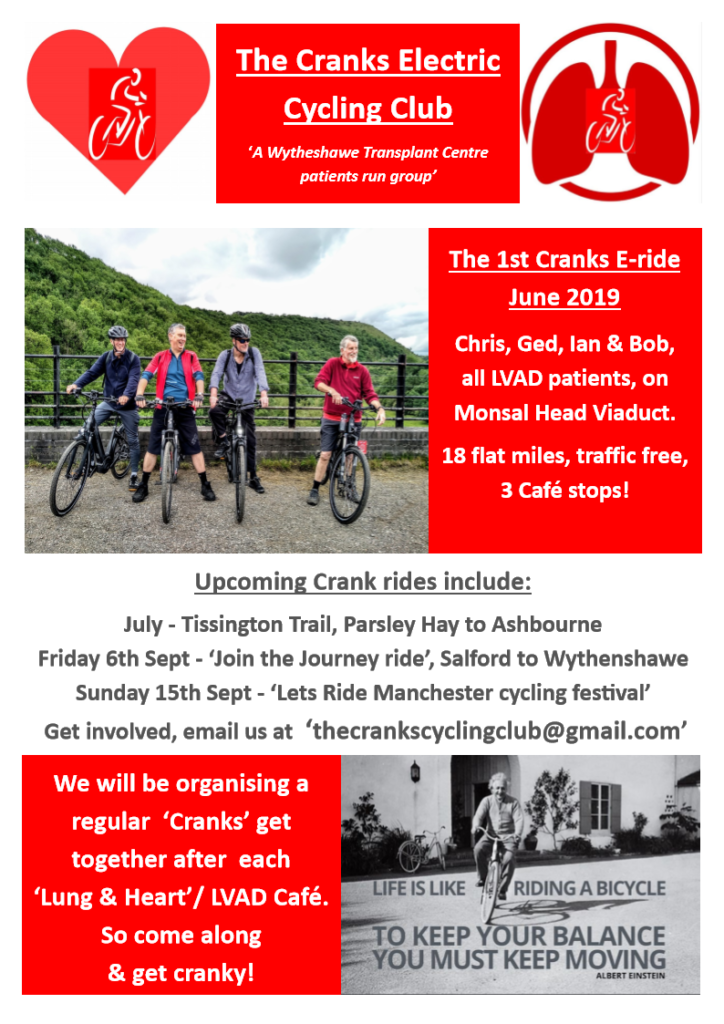 Come late spring this year six current LVAD users started cycling together around the countryside of Lancashire and the Peak District.

They cycle 20-30 mile rides every other week. The cardiac unit at Wythenshawe actively support and encourage them.

Ian recounts that recently there was a problem for one of the group members. “We stopped for lunch and he said, ‘I’m not feeling hungry’, that I thought was a little odd. We got our sandwiches and on returning to the table he said, ‘I’m going for a little walk.’ He was very pale and within about 10 metres he fell to his knees and I was dialling 999 for an ambulance right then”.

One of the peculiarities of someone wearing an LVAD is they have no pulse, even when conscious, thanks to the pump providing a constant flow unlike the heart.

The group were able to explain to the ambulance paramedics that he wasn’t dead, an education for them in this rare condition!

The next day, Bob was in Wythenshawe and sought further guidance from the consultant, asking if they should not cycle given the accident?

The answer came back that the positives far outweigh the negatives. 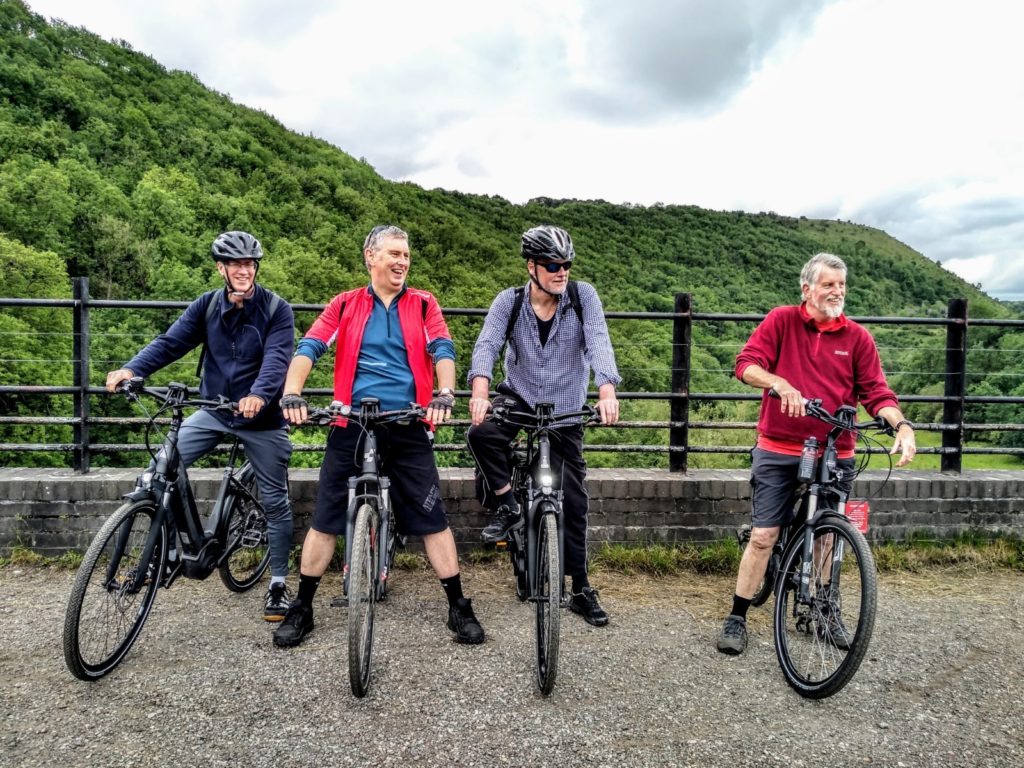 Ian has been told that since he is over 6 foot tall and has the O+ blood group, he may never get a new heart.

He has been advised that the availability of new hearts has fallen over the years thanks to road safety in the UK improving.

Fatal car accidents were a major source of healthy hearts but thanks to the rate of those plummeting, fewer are available from young, healthy donors.

To a certain extent Ian is now living in hope for better technology to give him a fully implantable LVAD in the coming years, and this has had a profoundly positive impact on his mental health, general outlook on life and his future.

Bob however, from being too ill to get a new heart, believes his e-bike riding has significantly contributed to his listing on the transplant list again.

Yes, thanks to e-bike riding and the help of his local hospital’s cardio-rehabilitation service, he has recovered the physical fitness to potentially live again as he did before his cardiomyopathy became disabling.

He was taken to a Vienna cardiac specialists’ conference earlier this year as an example of what a positive mental attitude combined with the remarkable technology of the LVAD and the skills of the medical profession, can do to enable recovery.

Another of the group has undergone sufficient recovery that he is due to have his LVAD removed as the LVAD has enabled his heart muscles to dramatically re-build and strengthen.

E-biking may have saved his life altogether.

Together they believe that e-bikes should be prescribed to everyone who has limited mobility due to their physical conditions, from lungs to hearts and for other illnesses.

Such are the physiological and psychological benefits of e-bike riding on those who discover them!