If we’re lucky to live long enough, we get to experience a nice long revolution of the circle of life. Watch grand children grow. Pass on hard earned wisdom to others. Feel our bodies slow down.

Wait. What? Feel our bodies slow down? “Time and tide wait for no man.” That relentless march of time eventually claims us all, cyclists included. Growing older can make riding a bike a lot less fun.

I’ve always felt that riding a bike, any bike, is a celebration of life. Regardless of age, a rider young in spirit travels farther and with less effort.

The bicycle has now answered the age old question of whether or not we actually have to slow down. As long as our minds are sharp enough to process speed and motion, our hearts and legs can carry us there in speed and style on an e-bike. Seeing riders take advantage of this has been one of the great discoveries of the electric bike journey for me.

I got to meet another enlightened rider, recently.  John Thomson from Melbourne, Florida is no stranger to hard work. The 74 year old cyclist spent 28 years in the US Army, followed by another 20 years working for Northrop Grumman. 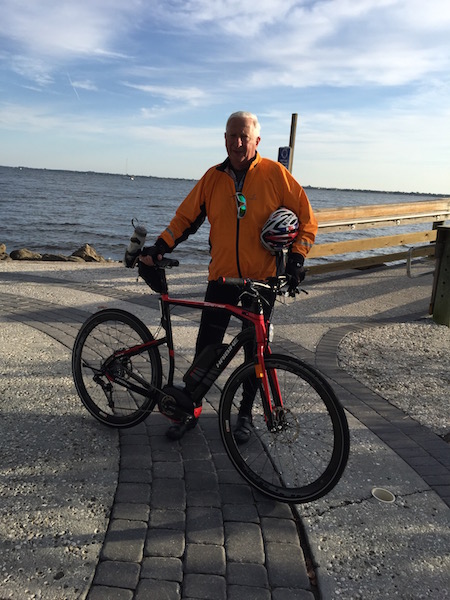 After riding road bikes for about 5 years, an injury over a year ago forced him to have complete knee replacement surgery. For John, getting back on his traditional road bike after surgery was not exactly a cycling panacea. Only able to manage 12-14mph on his rides, he wasn’t able to join his fellow riders in the group he once called home.

He may not have been the one breaking legs at the end of rides before the surgery, but now he couldn’t hold onto the back of the group even at the beginning.

The more common route at this point would be to either hang up the wheels for good, go find a slower group to ride with or just move along solo at the “new” pace. John quickly decided that none of those options were for him. 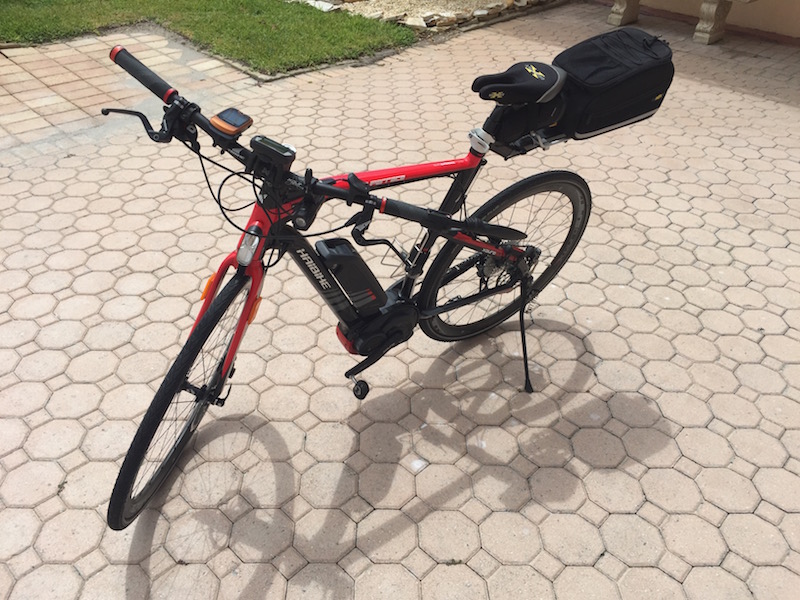 Instead, he learned about the Haibike Xduro Superrace 28 from NYCeWheels. Powered by a higher speed Bosch system, the Superrace can attain speeds of up to 28mph before it’s electric assist cuts out.

The higher speed limit of “speed” e-bikes like the Superrace are opening up new frontiers in cycling for groups of enthusiasts much larger than just the older generation. The bikes designed around mid-drive systems like the Bosch offer a combination of range, climbing ability and overall balance (where the extra weight of the e-bike systems are positioned).

These are all very important attributes, none of which can be taken lightly if an e-bike is going to be taken on more serious group rides. The right e-bike provides not only a very natural and enjoyable feeling to it’s rider, it’s also a much safer machine – especially when there are fast descents on the route. 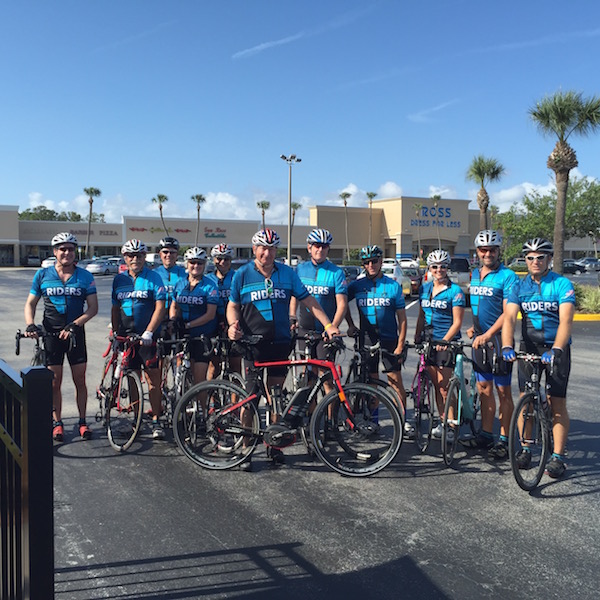 Aboard his e-bike, John is once again a welcome part of his old group ride. Flanked by skilled traditionalists aboard carbon machines sporting price tags well beyond John’s Haibike, John is able to be more a part of his ride than ever before. We chatted about his new-found ability to hit the front and push the pace, for a change.

For the other riders, having an e-bike along that has this ability has become a net-positive for the entire group. John is able to mix the ride up a bit, giving the others a challenge that is a lot closer to a real racing experience – something that is easier said than done in training exercises. John is finding his new ride an absolute joy on any road bike event he can join.

It’s so easy to dial it back, work as hard as he wants, be social when he wants, complete the route and enjoy the day. He is enjoying cycling more than ever. Riding more has helped him regain some more strength and health since the surgery. Those incremental gains keep adding up.

Of course, he throws in a note of caution, realizing that at his age, any crash could be his last. The reality is that any crash could be the last at any age. That’s never been the right reason to not ride a bicycle. John talks as though he’s completely cognizant that his e-bike is giving him significantly more life.

During our discussion, John and I talked about what it’s like to be on the Superrace in different – and difficult – group conditions. Some skills in cycling take years to master, and there is always more to learn. The reality is, cycling in a group is intimidating to many people.

For some, it’s reason enough to never join a group ride. Having to ride just a few feet or a few inches from other riders is not many riders idea of “comfort”. That’s the only real way to find enough shelter from the elements to survive on a group ride – at least if you’re going to finish with the group, that is. 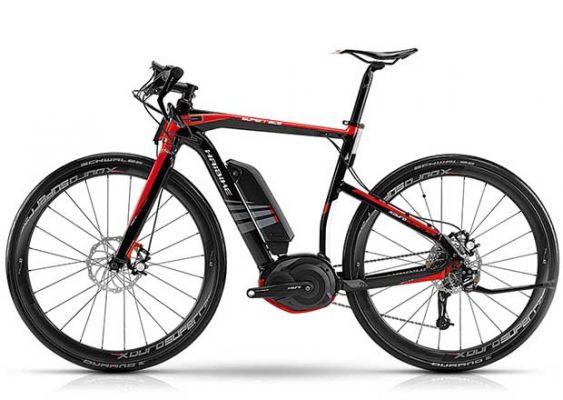 E-bikes like the Superrace 28 can give riders as many chances as they need to feel what it’s like to take shelter in a group. If they get mentally or emotionally fatigued, they can ride off to the side of the group, even in a headwind or crosswind, until they’re ready to try again.

Instead of their ride ending in being dropped as soon as they make a mistake or can’t make it through a crosswind stretch, they don’t have to lose contact. The result is their skills will be able to progress much more quickly. This is another utility of the e-bike we are not seeing implemented yet – but it is being done be riders like John.

Why we haven’t seen the “legends” of cycling like Merckx or Hinault on an e-bike and out riding with the pros? My guess is they feel like it would not be a macho effort and it wouldn’t be respected by their riding partners.

To that, I’d say “Get over it, dude.” You’re not on the ride at all without one. LeMond, I know, has ridden plenty of e-bikes and I doubt he would have such issues. He hasn’t ridden one of the new bikes, though.

Up until now, there really haven’t been e-bikes on the market that offer the beautifully natural feel of a traditional road bike. They have felt kind of robotic, or if they went well on the flats, they didn’t climb well. If they made it up the climb, the hub motor gave the wrong sensation on wet descents.

There was always something nagging. I rode the Haibike Xduro Superrace 28 in extremely challenging terrain in the hills outside of the race course at Laguna Seca earlier this year. I approached it from a very critical stance: If it’s really worthy of taking a group ride if you really have the ability to keep up on a traditional bike, it’s going to have to be just right. 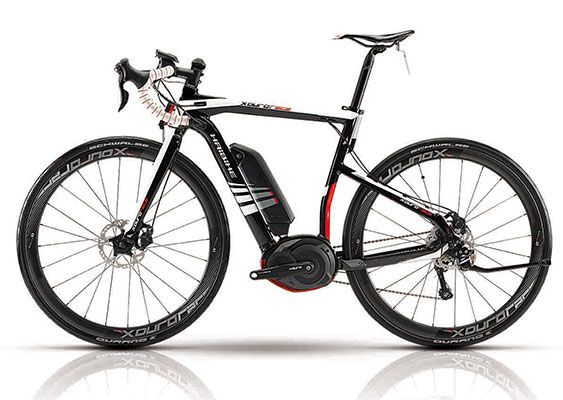 The Superrace has a flat bar, which is not my first choice for a road ride. Haibike does make the Xduro Race 28, which is basically the same bike but with a drop bar. That would have been my choice. Other than that, it was closest thing I’ve been on yet to having an authentic road bike experience on an e-bike.

That is to say, things have really progressed in the e-bike market, and Haibike and Bosch are really helping to usher in bikes that deliver a real cycling experience. There is no doubt that riders like John Thomson – and many, many more – will find an e-bike that gives them the cycling experience they’ve been looking for.