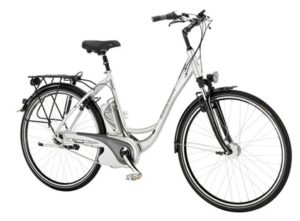 The following is guest post by Ed Benjamin about the common sizes of electric motors found on electric bikes and some background on the what will suit your electric bike riding needs the best.   Ed Benjamin is the founder of the Light Electric Vehicle Association (LEVA).

A “bicycle” is a very privileged vehicle. It can use the roadway, or the bike path. There is no need for a driver’s license, license plate, or insurance. Taxes are limited to sales tax.
One of the key issues in defining an electric assisted bicycle as a “bicycle” is the power of the motor. The general idea is that if the bike has a motor that is “too powerful” then it is really a moped or motorcycle. So most laws that create and define the category of electric bicycle worldwide have a limitation on the power of the motor – with the idea that the ebike should have similar speed and performance to a normal bike.
That, by the way, is a pretty broad range of speed. Normal bikes can travel as fast as 30 MPH with a strong rider, and they can climb nearly any grade.

But in general, many nations have adopted laws that define a bike that uses a relatively low powered motor, with a limited speed, as an electric bike – with the same privileges as a normal bicycle.
So what about motor output?
There are a lot of factors to consider in motor output choices for an electric bike. Here are some of them:
1.    Legality. Different jurisdictions have different laws about motor output for a vehicle that can still be considered an electric bike.  In the EU, Japan, China, and other places, the power limit is 250 watts. In the USA it is 750 watts.
2.   How that power is measured. An argument can be made to measure power in these ways:
3.   Do we use peak power? (The amount of power that the motor is capable of producing under maximum effort for a short period before overheating) or do we use continuous power
4.   How much power can the battery support? There is a balance of cost, weight, and energy storage in the decisions about the motor power, battery size, etc.

This is not a simple subject. But I will offer my advice:

Climbing hills on any of these will require the rider to add in some muscle power – but not a lot.

In all cases, the rider will enjoy the ride, sweat a lot less, and have less fatigue and go farther, faster.

-End of Article by Ed Benjamin-
What are your thoughts?  Does this answer questions that you have had regarding electric bike motor wattage?
Please leave your comments below. You can use your Facebook or Twitter login to leave a comment.