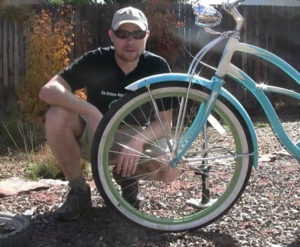 This is the transcript to the video: Why & How to Maintain Your Bike Tire Pressure

Hello, and welcome to Electric Bike Report.  My name is Pete, and today I wanted to go over maintaining your tire pressure.  It’s an important thing to know for keeping your bike running smoothly, keeping it running efficiently, because if you maintain the right tire pressure, then you’re going to get a smooth, efficient ride.  If the tire pressure is too low, the bike will kind of bog down, and you’ll kind of feel like you’re having to pedal harder than you really need to.  So, that’s one benefit of maintaining your tire pressure.  Also, it’s to avoid flatting.  Sometimes if your tire pressure’s too low, what happens is, you know, you hit something like a rock, or something that’s kind of large, maybe in the road or in the gravel path that you’re riding on, and it will actually compress the tire and pinch the tube against the rims.  So, that can cause a flat, and that’s always no fun.

So, today I wanted to go over how to maintain your tire pressure.  And it’s a pretty basic thing, but I think it’s important to know. Right here, I have a Schrader valve, and this is something that you typically see on a car tire is the Schrader valve.  And basically, you just take off the valve cap there, and then there’s the valve and then inside is a little piece that will, if you push it in just a little with your finger nail or a screwdriver will release the air pressure.  And I’m just showing you that because sometimes when you put the pump on here and you try to pump it up, it will sort of resist and what you need to do is sometimes just unseat  the valve a little bit by pushing the valve in and hearing the air come out like that.  Now, there’s another type of valve stem as well and this is the Presta valve stem.  And let me see if I can get a little bit closer and show you what this looks like.  Okay, so this is the Presta valve stem, and this is common on some bicycles, but I think, in general, you’re going to find the Schrader valve, which is like the automobile valve.  But then this Presta valve, you take off the valve stem, and that’s what that looks like, just a little black thing there.  And then you’ve got the Presta valve.  And you actually have to unscrew this little piece.  You can see how I’m twisting that.  And you actually have to push that down and release a little bit of pressure, just to kind of unseat the valve.  So, that’s… and then to basically put that back together, you just screw that little nut back down on there, and you take this valve cover, and put that back on.

So, let me just show you how you use the pump on the standard Schrader.  Now, this pump that I have here actually has both the Schrader and the Presta valve adaptor, you know, for both valve stems.  So, your pump may only have one.  And I’ll, in the little notes below this post on EletricBikeReport.com, I’ll put a recommended pump for information.  So, you basically just take the pump head and then install it onto the valve stem here, like that.  And then usually there’s a little lever that you have to kind of open up like that and lock into place.  Then, you just basically take the pump, and it should have, like, a reading as far as pounds per square inch on the dial, or your pump gauge.  And you just start pumping until you get to the desired pressure that you want.

And, generally, for you know, most bikes just for cruising around on the bike path or the roads and some gravel pathways and things like that, I recommend going with 50psi.  It’s kind of an average pressure that works for most people.  You know, if you’re a lighter-weight person, you could probably run, like, 45.  If you’re a heavier person, you might it around 55.  But I think 50psi is just a good sort of baseline for the pressure, just for sort of general around town riding and commuting and things like that.  So, yeah, that’s basically it.  And then, once you’re done pumping it up, you just undo the pump head there.  And then just remember to put your valve head on.  This one is actually kind of cool it’s a little blinker just so people can see you at night, and kind of a neat little accessory.  So, just put that one back on, and you should be good to go.  So, that wraps it up for this little quick tip.  So, I hope it was helpful.  And so, yeah, I’ll talk to you later.