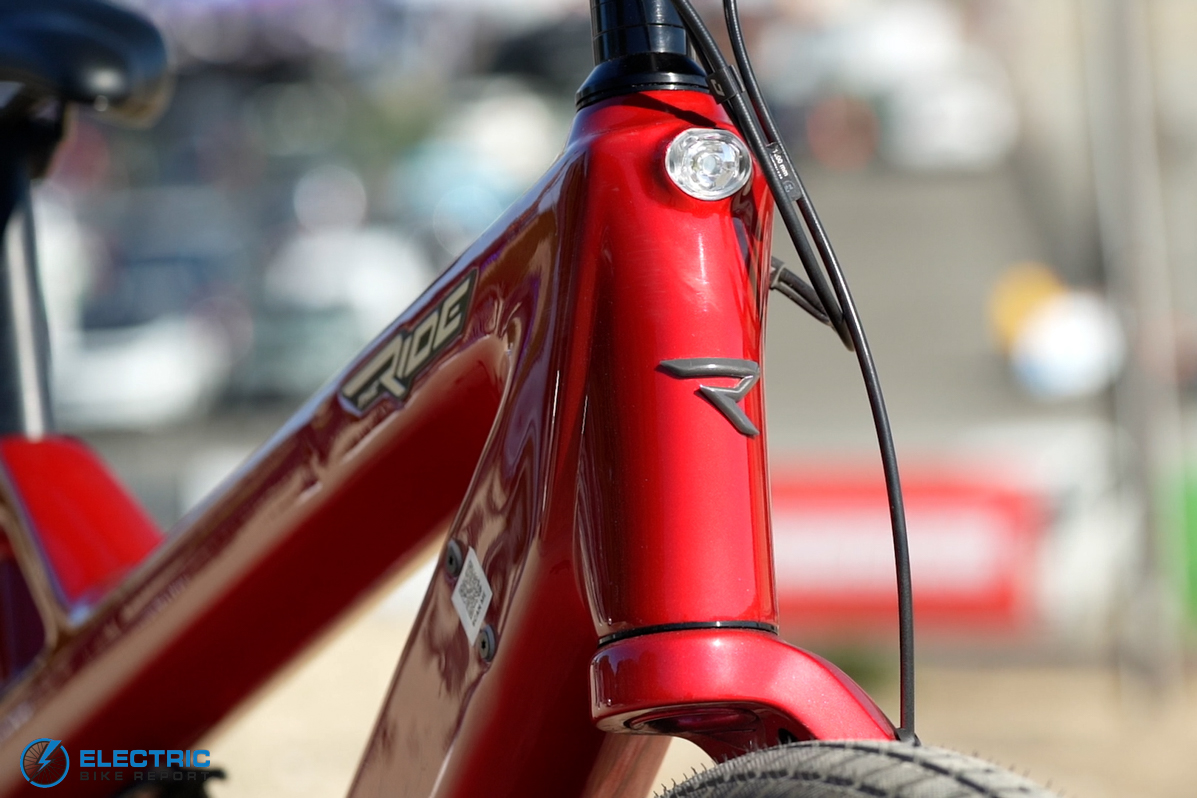 Designed in 2018 and released this year, TheRide’s Radiant Carbon is all luxury.

There are plans to make a cheaper model — the carbon fiber frame alone tacked on about $2,000 to the total cost, according to Ellsworth — but the company opted to go big for their first bike and put their best foot forward.

The Radiant Carbon is, as the name suggests, entirely made of carbon fiber. It’s powered by the Shimano STEPS e6100 mid-drive motor with a 250W nominal power rating. That motor typically makes 60Nm of torque, but the version on The Radiant Carbon has been tuned up to make more than 70Nm, according to Ellsworth. Hidden in the frame is a 630Wh battery that, in theory, will propel the bike more than 100 miles on a single charge. 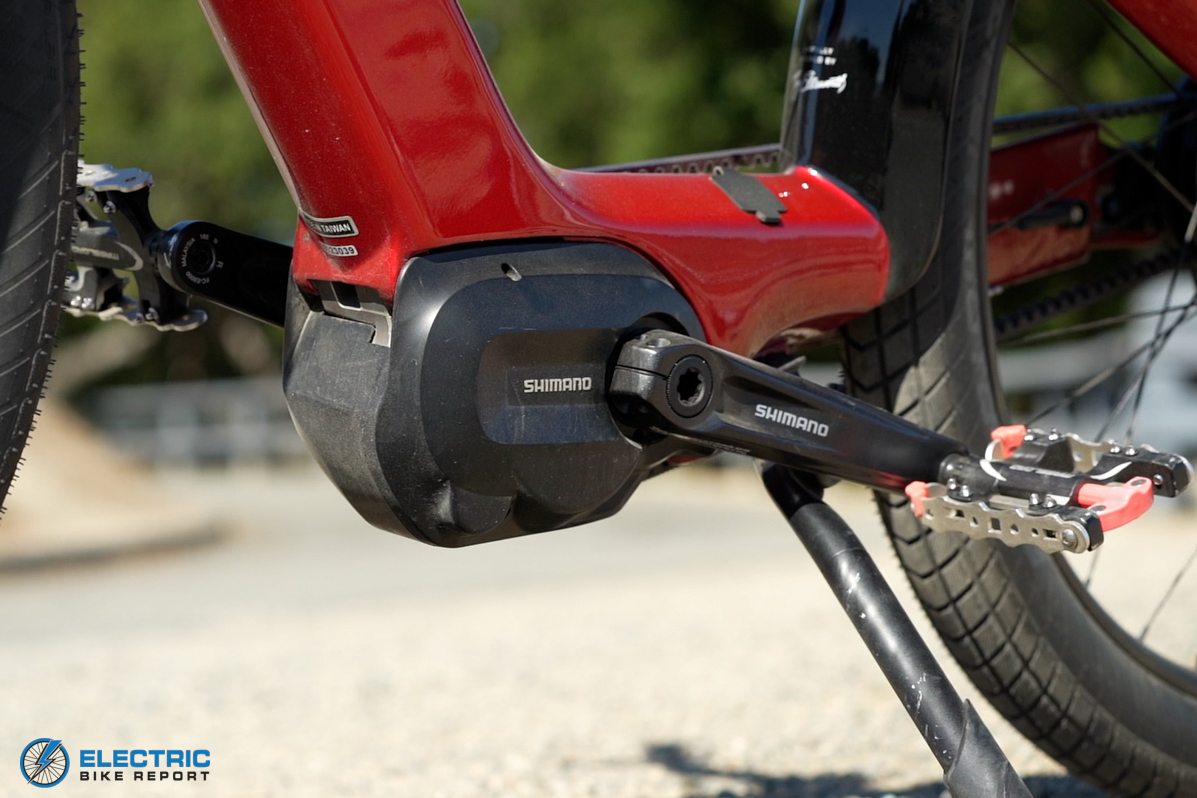 The Shimano STEPS e6100 motor is a Class 1 e-bike motor with 250W of power. It draws energy from a 630Wh internally integrated battery in the frame.

We got to spend some time riding the Radiant Carbon at Sea Otter and found the motor to be remarkably well riding. It’s plenty torquey on steep hills and, despite the bike’s cruiser-like geometry, it pedals very efficiently. The geometry, which Ellsworth has coined “expanding universe geometry” is designed with ease of access in mind. The cockpit is built so riders are able to mount the bike easily and place their feet on the ground while seated.

But one of the really cool features of the Radiant Carbon is the Enviolo AutomatIQ CVT drivetrain, a relatively new (and still rare) gearing system that actually shifts for you. All you do is choose what cadence you want and the hub seamlessly adjusts the gear ratio to keep you pedaling at that rate no matter your speed. This was my first time riding the AutomatIQ system and, I’ll have to admit, it did take a little time for my brain to get used to not shifting. But as advertised the hub does automatically adjust and I rarely found myself pedaling at a rate or effort that wasn’t comfortable. This is something that’s going to really appeal to that fast-growing crowd of new cyclists buying e-bikes right now; it’s simple, easy and is one less thing to think about. 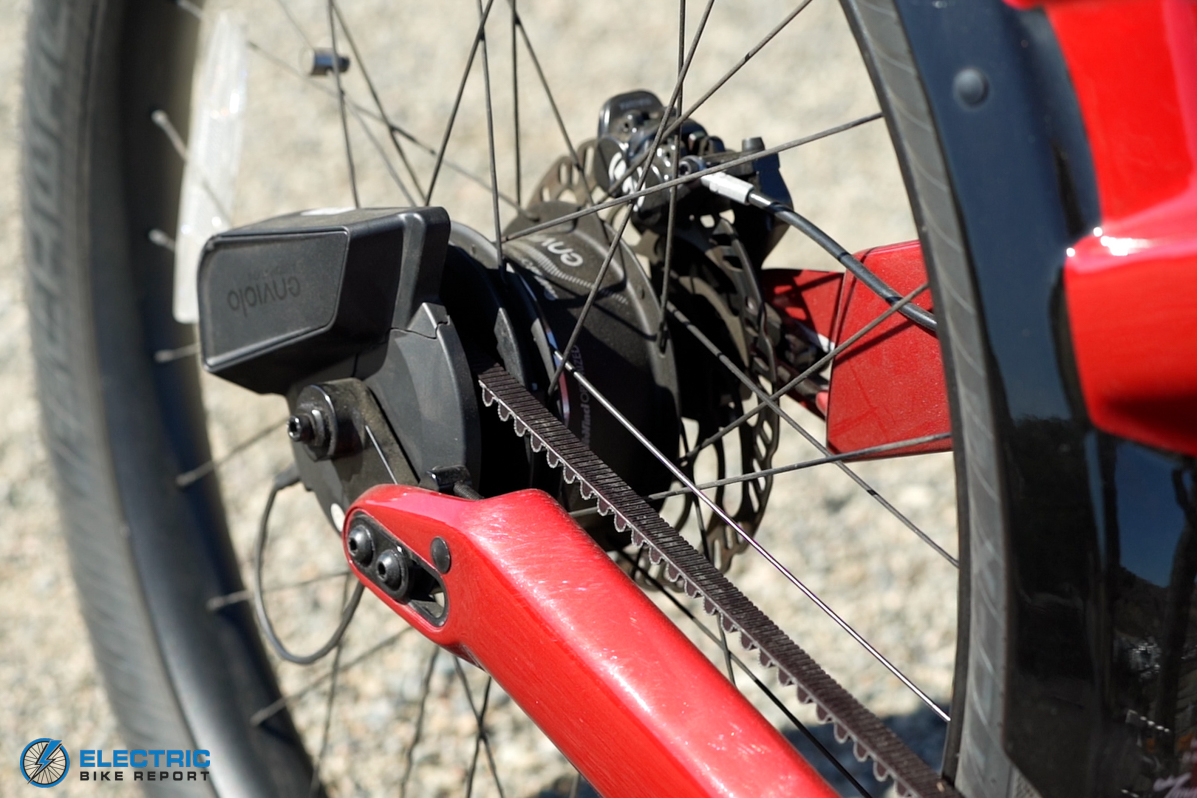 The Enviolo AutomatIQ CVT rear hub shifts for you and perfectly maintains a cadence of your choosing. It’s a new drivetrain and still relatively rare to see on bikes.

That Enviolo hub is tied to the Shimano motor via a Gates carbon belt drive, which protects pant legs from greasy chains, and the braking is handled by the exceptionally powerful Magura MT30 four-piston hydraulic disk brakes.

Aside from the special geometry, there are also some structural elements of the frame that have been removed to give the frame a very unique design. The fork only has a left leg, the right-hand seatstay is gone and the left chainstay missing. Ellsworth said these were removed to lighten the bike’s “visual” weight. 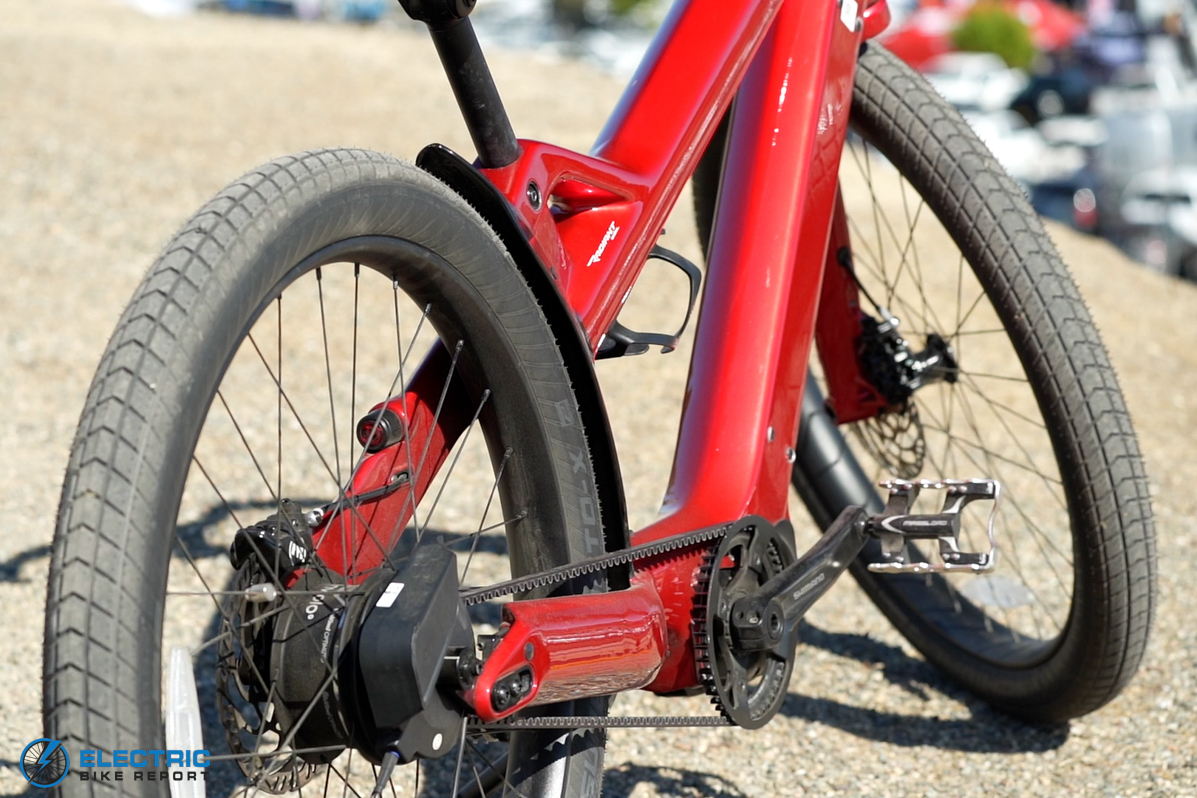 Missing a seat stay, chain stay and one of the fork legs, the Radiant Carbon has a very unique look.

E-bikes, thanks to all the motor and battery componentry crammed into the tubes of the frame, naturally begin to look more girthy and heavy. Those larger tubes, aside from adding visual mass to the bike, also add structural reinforcement that makes it possible to remove elements of the frame you typically see on traditional bicycles.

While only 360 models of the Radiant Carbon have been made, you can still buy one. The bike is up for sale on TheRide’s website and will be hand-delivered to your door by a concierge service. Or, if you’re in southern California, you can buy the bike in person at TheRide’s shop in Newport Beach.

Thanks for reading our first-look review of TheRide Radiant Carbon. What are your thoughts or questions about the bike? Let us know in the comments below!