Tern calls its GSD electric cargo bike a “mid-tail” cargo bike, meaning it’s neither the biggest nor the smallest e-cargo bike on the market — it’s somewhere in between.

After spending some time riding the Tern GSD S00 LX — one of four GSD models — during the Big Gear Show in Park City, Utah in early August, that mid-tail designation feels about right. The bike is remarkably compact and easy to handle, even with quite a bit of load added to the rear rack. It’s also definitely not small — Tern loaned Electric Bike Report a GSD S00 LX for a morning and I was able to tote myself, my videographer and all our gear up hills and through tighter residential areas without so much as a blink.

GSD is an acronym for “Get Stuff Done,” a phrase discreetly painted on the downtube of the bike we tested. It’s a very fitting name for this bike that additionally captures Tern’s belief that bikes are tools, not toys. The GSD is a bike designed for jobs; whether that job is carrying your kids to preschool or hauling deliveries to their destinations, there’s likely a configuration of the GSD that’ll meet your needs. 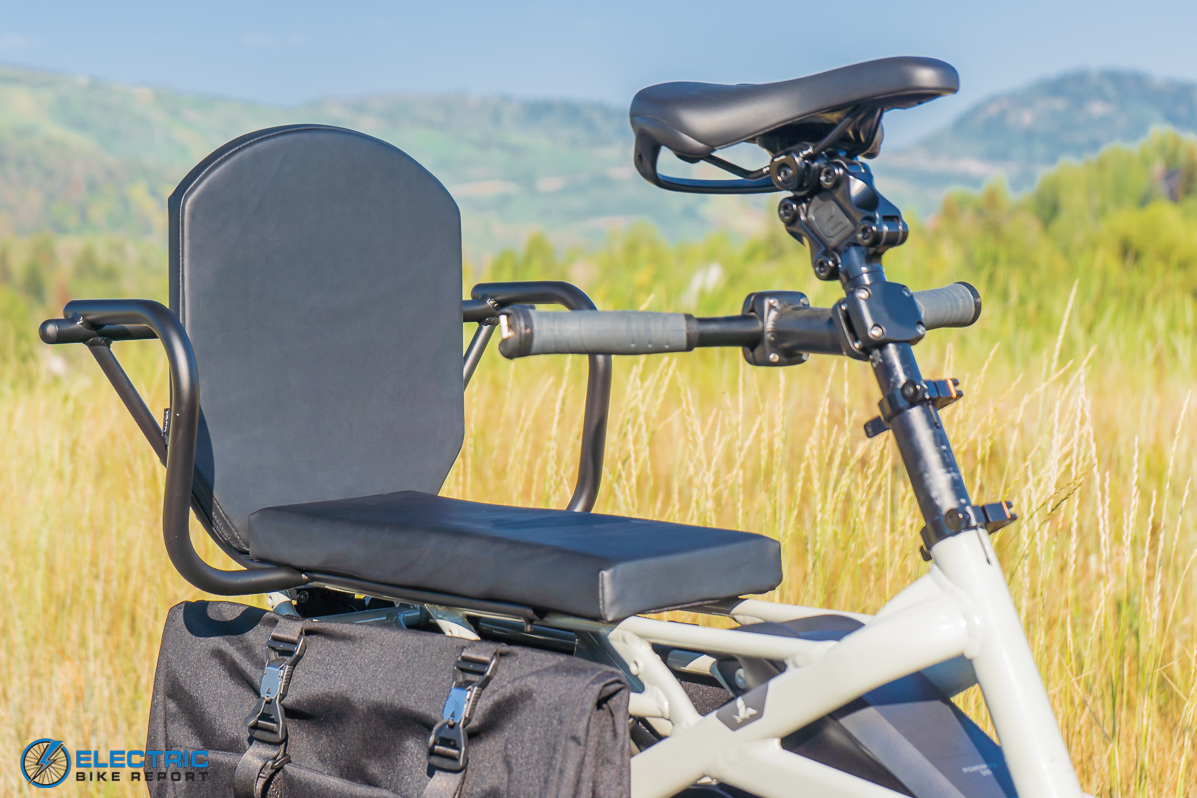 Want to take a friend? The GSD can do that.

Like all of Tern’s e-bikes, The GSD was designed to be a modular e-bike customizable for your needs. The GSD we rode was configured as a people carrier with an adult-sized captain’s chair mounted on the back. So we ditched the second e-bike our videographer, Bryce, had been using to film these mini reviews and we set out together on the GSD to see how the mid-sized cargo bike handled under load.

The GSD is rated for a maximum gross vehicle weight of 440 lbs, a rating that includes the weight of the bike and rider. The bike, according to Tern, weighs about 77lbs, leaving a rider, cargo and accessory carrying capacity of about 363 lbs and some change — a substantial load.

Despite that impressive figure, some napkin math shows my own weight plus the weight of our videographer Bryce made for a sum that toed the line of how much the GSD was officially rated to carry. But you never would have known we were on the limit of the GSD’s cargo capacity, because the bike certainly didn’t handle like it. The GSD took our weight like a champ, and while stopping, starting and cornering at low speeds certainly took some getting used to, never once did the bike feel unwieldly or overly tippy. While this particular GSD was outfitted for people carrying, I could easily see this bike as a grocery getter or even a workhorse for a small business.

Powering the GSD is the Bosch Cargo Line motor that lays down 85Nm of torque. This motor has loads of low-end grunt, which was very helpful when getting the bike rolling fully loaded and for climbing hills. But if you’re looking for an ultra-fast cargo bike, this probably isn’t the one for you. This is a Class 1 motor limited to a top pedal assisted speed of 20 mph, but it really liked cruising at about 14 or 15 mph regardless of being loaded or not. If you’re unfamiliar with cargo bikes, trust me when I say you don’t want to go much quicker than that. Cargo bikes handle differently than typical e-bikes, especially when weighed down. 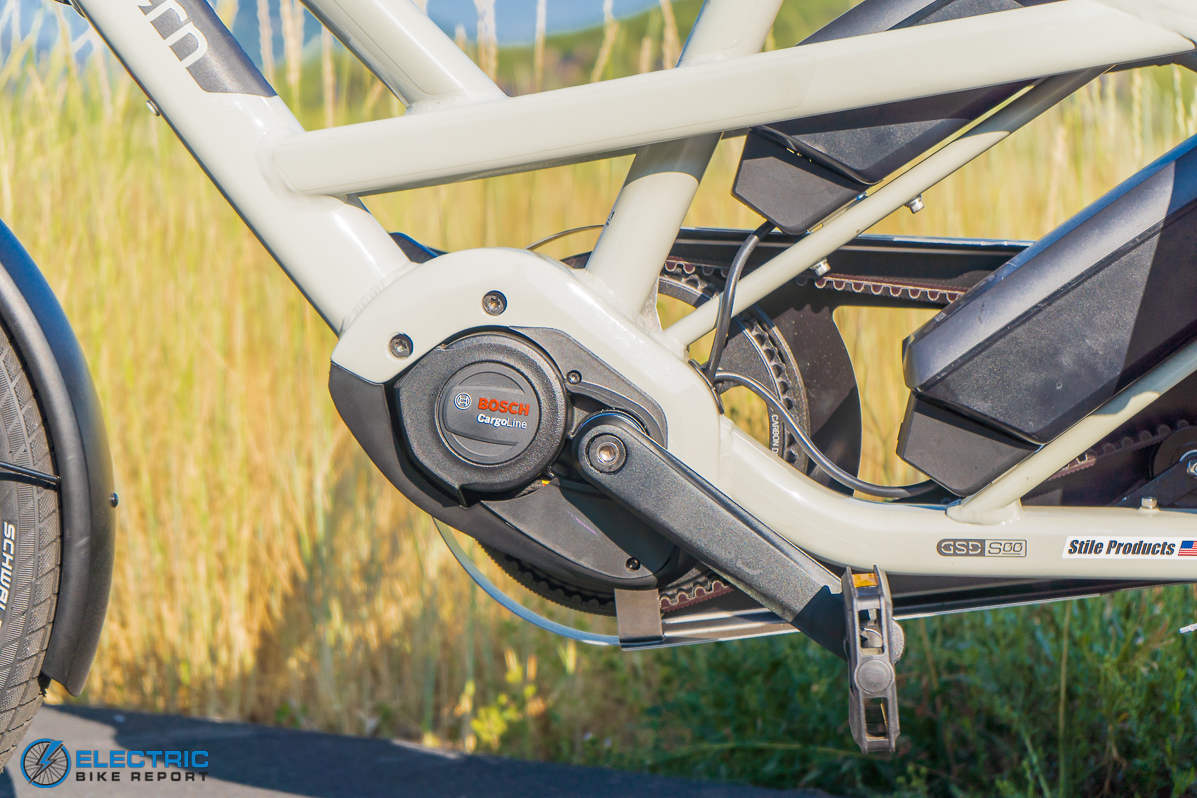 The GSD S00 LX we tested was outfitted with two Bosch PowerPack 500 batteries, making for a whopping 1,000Wh of battery power. This is an optional upgrade, but one I’d highly suggest. While carrying Bryce I spent 100 percent of the time in turbo mode, the motor’s highest output setting and the one that drains battery quickest. This wasn’t because I was trying to go fast, but rather I just needed that much oomph — don’t underestimate how much energy it takes to move a fully loaded cargo bike. 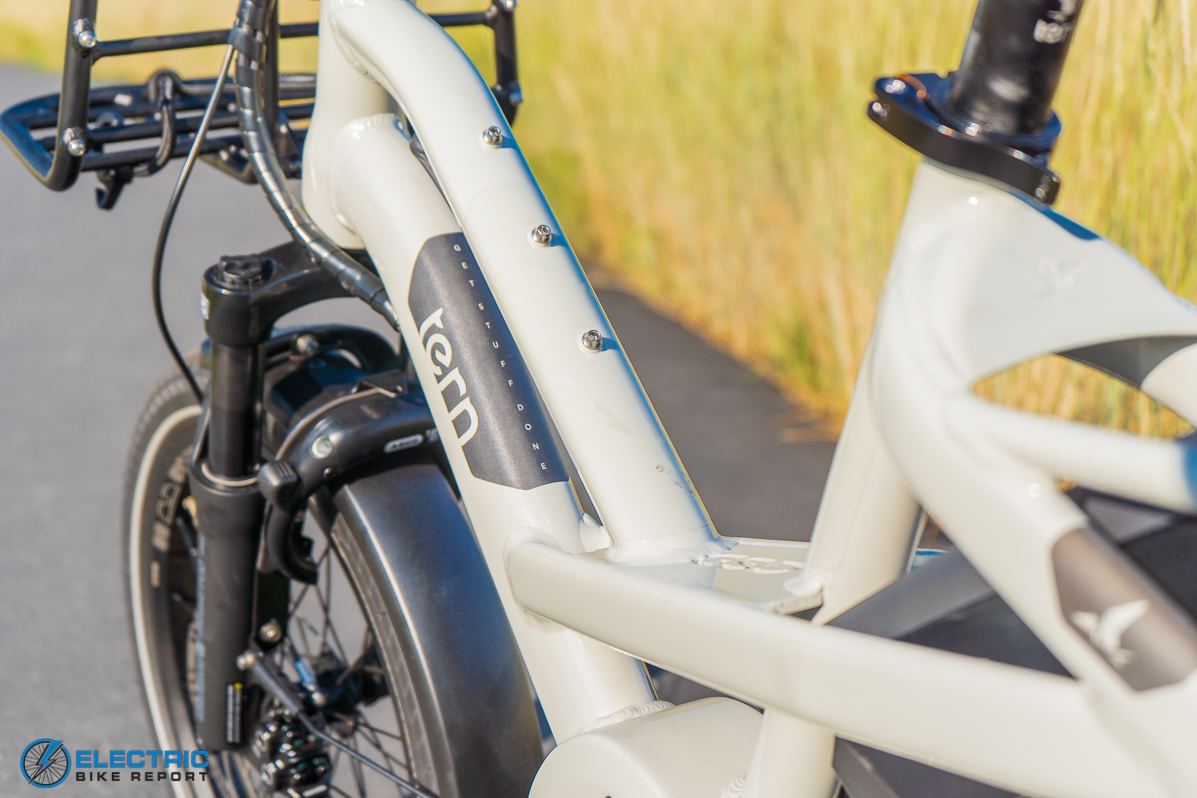 The frame is a typical design from Tern: Low slung and visually similar to a folding bike. But this one’s bigger than a folding bike, much bigger.

A Bosch Cargo Line motor with 85Nm of torque makes this bike go. Powering that motor is a pair of Bosch PowerPack 500 batteries making for a total of 1,000Wh of energy.

That huge battery reserve is an optional upgrade (you can also get the bike with one battery) but I’d highly suggest popping for the dual setup, especially if you plan on carrying much weight.

The GSD S00 LX — one of four models of GSD — comes with a Gates Carbon Belt Drive connected to an Enviolo CVT internally geared hub.

This proved an awesome torque-tolerant setup that still shifted well even when the bike was fully loaded. For those unfamiliar with the Enviolo system, it’s an internally geared hub that uses a unique system of planetary gears that seamlessly reduce or increase the gear ratio with no gaps. All you do is twist the grip shifter forward or back and pedaling gets easier or harder without the clunky gear changes. Enviolo makes a version of this hub that shifts automatically, but Tern said they stuck with the manual version due to weight constraints — they had to be sure it could handle a full load of cargo.

The Gates belt drive is another nice feature. Not only is it tough, it’s just clean and easy to maintain. 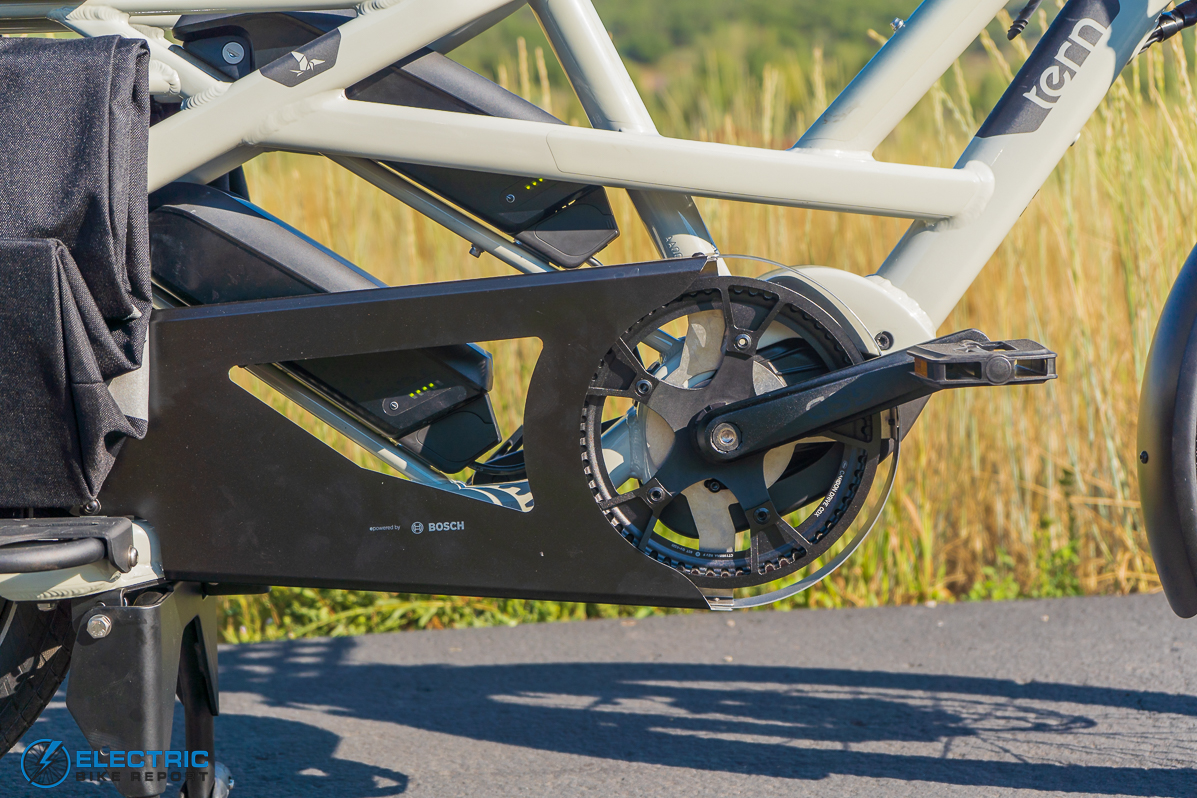 Tern wrapped up much of the drivetrain with a protective shroud, but underneath is a Gates Carbon Drive and an Enviolo hub.

Tern spec’d the GSD with a set of Magura MT5 eSTOP 4-piston hydraulic brakes, a top-of-the-line braking system special made for e-bikes and derived from the brakes used on downhill mountain bikes.

To put it short: These brakes are incredibly capable and handled the fully-loaded GSD with ease, even in hilly Park City. They’re Magura’s flagship e-bike brake designed for heavy-duty use.

Other notes: An adjustable cockpit and rack choices galore

The GSD S00 LX Tern loaned us during the Big Gear Show was outfitted to carry a passenger, but that’s far from the only use of a GSD: Aside from the plethora of racks and bags special-made for Tern bikes, the GSD is the cornerstone of Tern’s push to make e-bikes a more plausible tool for small businesses. Tern this year launched the Bikes for Business initiative that aims to get more businesses on e-bikes over other vehicles like vans.

This bikes for business ethos is evident everywhere on the GSD; it’s just built to be practical, utilitarian and useful. It’s designed to be so much more than an e-bike. 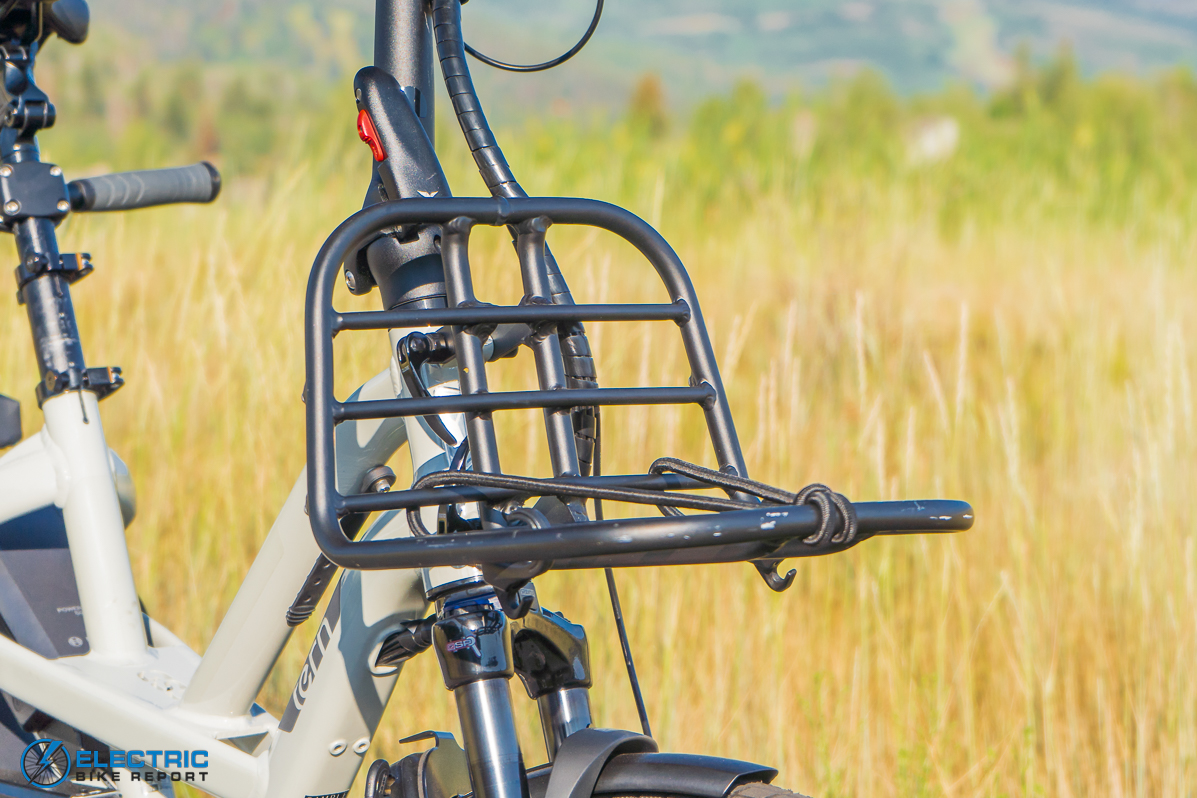 A stout front rack option mounted to the front of the GSD we tested in Park City.

All of Tern’s electric bikes are fitted with their innovative fit system which, by way of a telescoping seat post and Andros adjustable stem, allows riders to heavily customize the fit of the bike. It also makes it easy to easily share one bike between two people, no matter their height or size.

Tern has a perspective on e-bikes we don’t often see in the United States; that they’re useful for so much more than sporty rides in hills or leisurely beachside cruises. Tern wants to see its bikes used as tools and business solutions, much like a van or work truck.

The GSD is the embodiment of that vision. It is, simply put, built to be a car killer.

I’m incredibly impressed with the GSD’s thoughtful design and overall rideability. While it is a utilitarian cargo bike, Tern hasn’t sacrificed comfort or good handling — if anything, they actually made those things better. It’s certainly not the most speedy e-bike on the market, but it’s really not meant to be. Under load, the GSD is an absolute workhorse that handles weight very, very well. As its name says, this bike is meant to Get Stuff Done.

Tern sells the GSD S00 LX — and the other models of the GSD — though its national network of dealers.