Electric bikes are a gateway drug. The e-bike purchase itself is easy to plan and budget for, but it’s all the little items — the gloves, the lights, the bags — that get you.

Suddenly, before you know it, your garage will likely be flush with not just the e-bike you saved for, but with a host of other unplanned purchases you quickly realized you didn’t just simply want, you . If you’ve managed to fight the urge to buy a bunch of accessories alongside your bike, I commend you and highly suggest you move on from this post, because the 2022 Sea Otter Classic was chock-full of drool worthy items.

There are an innumerable number of cool trinkets on show at this year’s Sea Otter, including a big armful of items being designed specifically for the special use case of e-bikes. We saw saddles that push the limits of design and materials, super secure locks that yell when they’re tampered with and can be unlocked with your phone, we even saw specially-designed chain lube (because yes, e-bikes even need special maintenance).

Here’s our picks of some of the most exciting e-bike specific accessories that the Electric Bike Report staff saw on show this year. 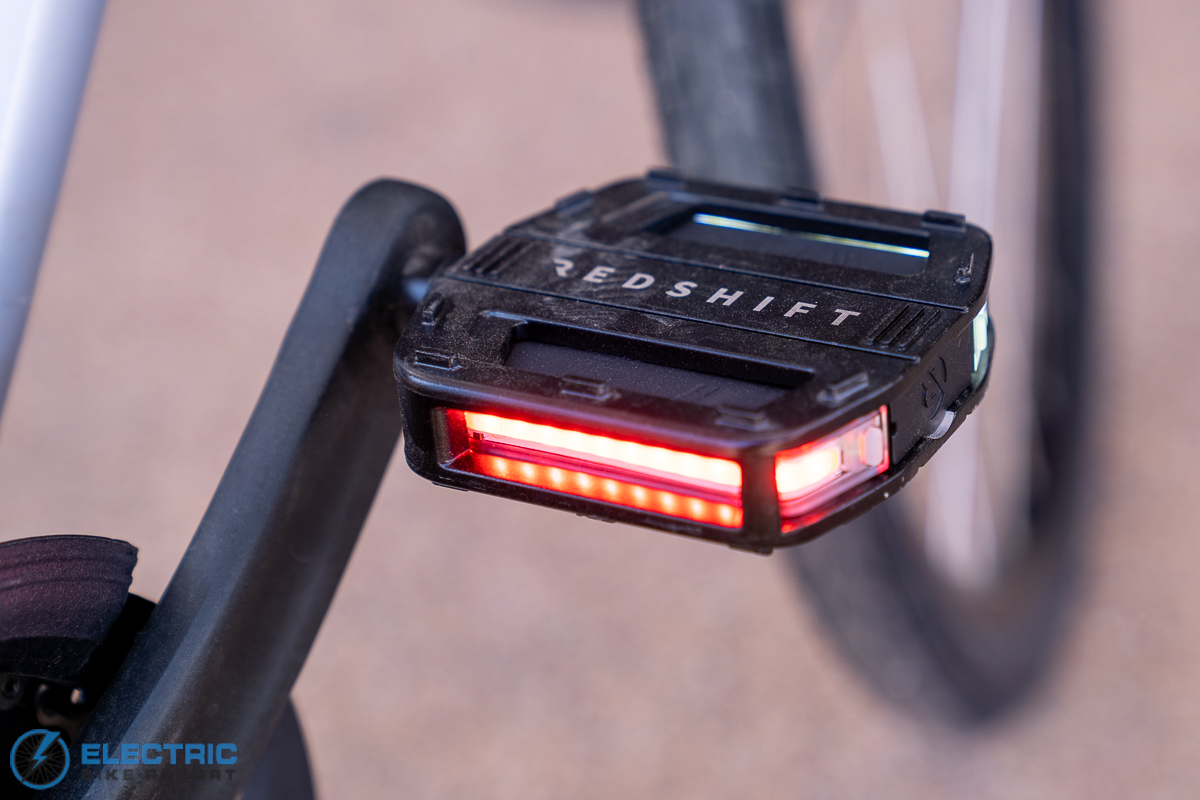 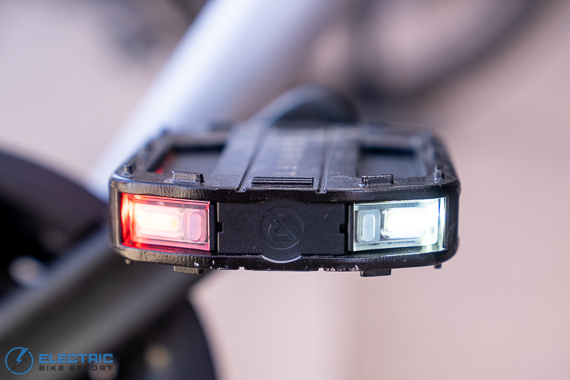 The front and rear facing LEDs have sensors that tell them to turn red or white based on if they’re facing forwards or backwards. Red for backwards, white for forwards. 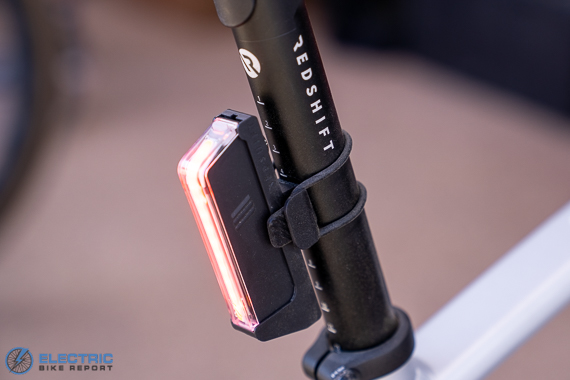 The LED banks are removeable from the alloy pedal body and, with a specially-made seat post mount, can be used as a low-profile blinky.

The Redshift Arclight pedals are a modular pedal with embedded LED’s designed to keep bike commuters more visible on the road.

The pedals, which are made of a heavy-duty alloy construction, feature modular banks of LED lights the sit inside the pedal body and face forward and rearward. The LEDs are powered by rechargeable batteries and are controlled by a sensor that actually detects what direction each LED is facing, automatically turning the rearward facing light red and the front light white. The sensor also detects when a rider is pedaling and automatically turns them to sleep after 30 seconds of inaction and automatically wakes them up.

The lights can also double as a taillight with the addition of a seat post adapter. Simply pop out one of the LED banks and plug it into the adapter and you’ve got a low-profile blinky. Another sensor inside the adapter automatically turns the light red.

The Arclight pedals MSRP for $139.99 and are currently only available in a flat pedal, though Redshift says a clipless variation is in the works. 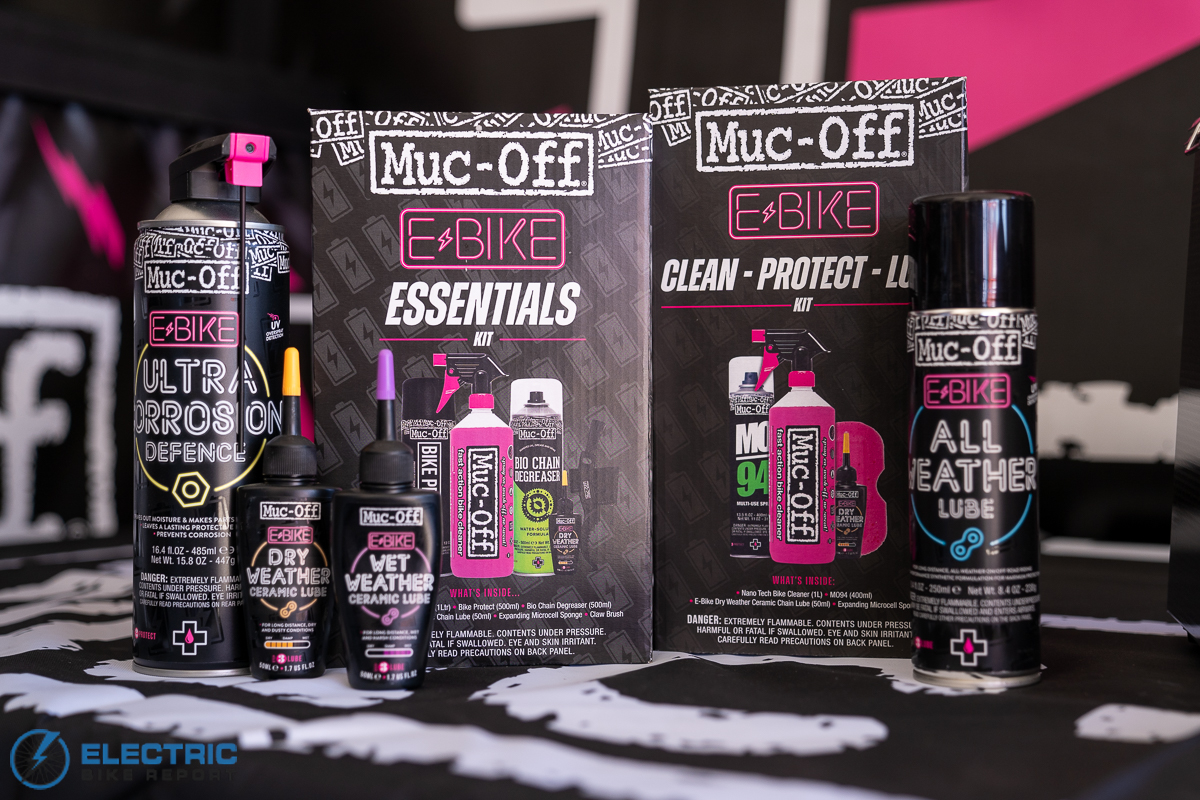 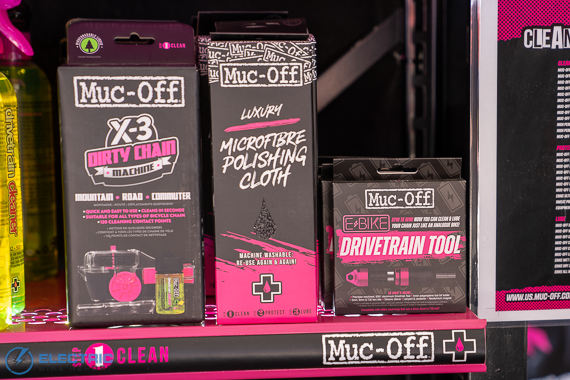 Much of the Muc-Off lineup can be used on an e-bike. 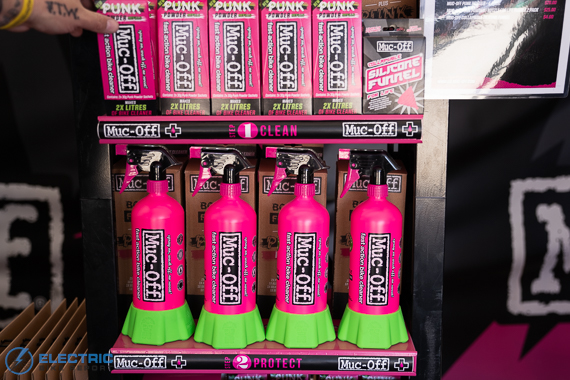 Not specifically e-bike related, but Muc-Off’s iconic pink cleaner is now available in powder form so you can reuse the same bottle — an eco-friendlier option.

A clean and well-lubed e-bike is a happy e-bike, and U.K.-based Muc-off has been a pioneer in making a line of lubricants and cleaners made specially for the unique application of e-bikes.

The company’s e-bike specific lineup includes a waterless wash (for those afraid of getting their e-bike wet), protectants and anti-corrosion sprays that can actually protect your battery terminals. But the real standouts in the Muc-Off e-bike lineup are their specially-formulated chain lubes.

When it comes to e-bikes, not all lubes are created equal. Traditional bicycle chain lube can have a tough time tolerating the sustained power and torque generated by modern e-bikes, which leads to quicker component wear and annoyingly squeakier chains. Muc-Off’s e-bike lube formula, among other things, uses boron nitride, which helps the lube stay on the chain for longer at high torque.

And though the act of washing your e-bike can feel a little sketchy (electrical components and water don’t traditionally mix well), you can in fact wash an e-bike. The waterproofing varies by make and model, but by and large e-bikes are water resistant and can be sprayed off with a hose. Check with your manufacturer to be safe.

The Proxim saddles lean on Prologo’s depth of saddle-making knowledge while incorporating new designs specifically thought up for eMTB riding.

The Proxim saddles have broader noses designed for comfort as eMTB riders scooch up on the saddle when climbing.

An e-bike specific saddle designed to stand up to the rigors of EWS-E racing, the lineup of Proxim eMTB saddles are thoughtfully made, tough and very, very cool.

Proxim is a new spin-off company from already well-known saddle maker Prologo, which has traditionally made lightweight and high-performing saddles for road and cross country mountain bike racing. The Proxim lineup takes Prologo’s depth of saddle making knowledge and applies it to the relatively new world of eMTB.

The saddles are constructed of a nylon chassis and alloy rails for strength. There’s also a small molded handle in the rear of the saddle for lifting the bike — a small detail that anyone who’s lifted a weighty eMTB knows is important.

The nose of the saddle is broad so that eMTB riders can scooch up on the saddle on climbs and remain comfortable. The saddle’s padding is a patented system Proxim calls the “multi-sector system,” or MSS for short. This design silos the padding into different sections, with each sector featuring different density foam that’s specially designed to adapt to rider anatomy and movement.

I got to ride the Proxim saddle during Sea Otter and can attest that it’s really, really comfortable. Definitely worth a look. 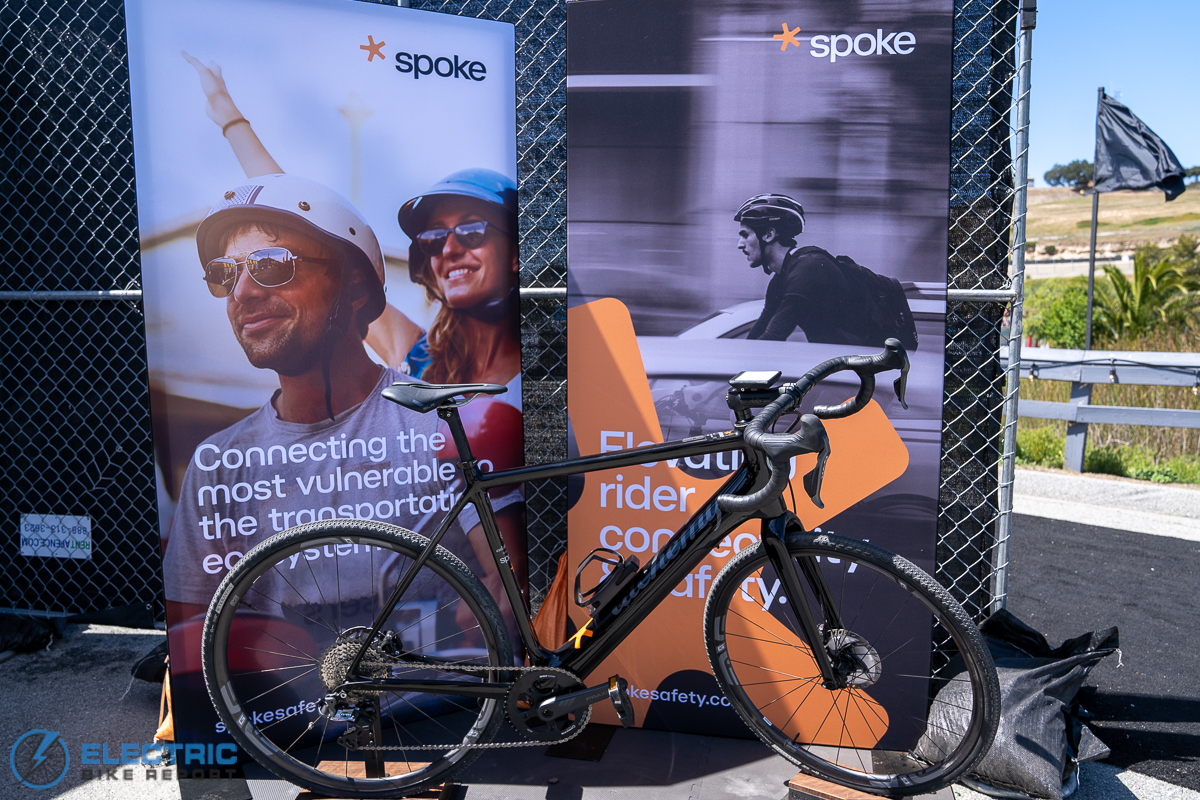 Spoke safety is a mobility company that aims to help cars and cyclists see each other on the road. 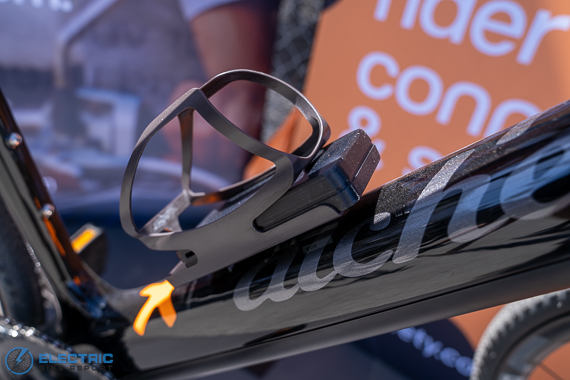 The Spoke sensor we saw at Sea Otter was tucked underneath the bottle cage on the downtube. 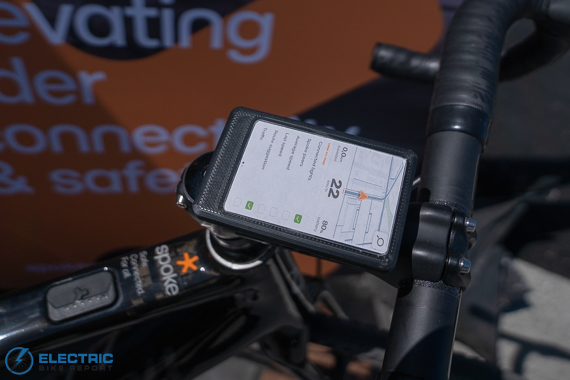 Information about vehicles around you is shown on a heads-up display mounted to the handlebars.

Spoke is a mobility platform with the goal of making roads safer for bikes. Essentially, they aim to make bikes see cars better and cars see bikes better.

The technology essentially works through an on-bike senor that communicated with a display on the handlebar and the vehicle, which would alert both car and rider to each other’s presence. Spoke is not yet on the market and was being previewed at Sea Otter. We spent some time with the Spoke team so stay tuned for a more in-depth preview of the technology.

Spoke is currently partnered with T-Mobile and Audi, and the technology is expected to come stock in Audi’s cars by 2025. 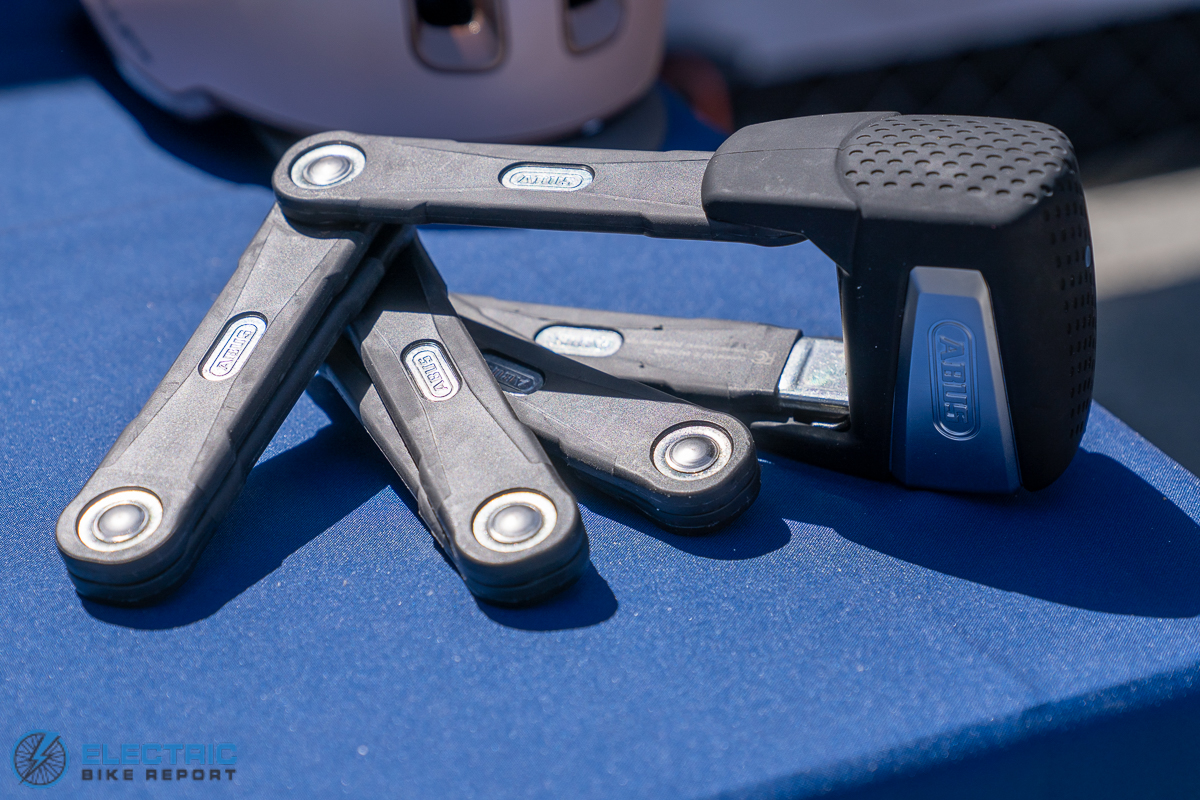 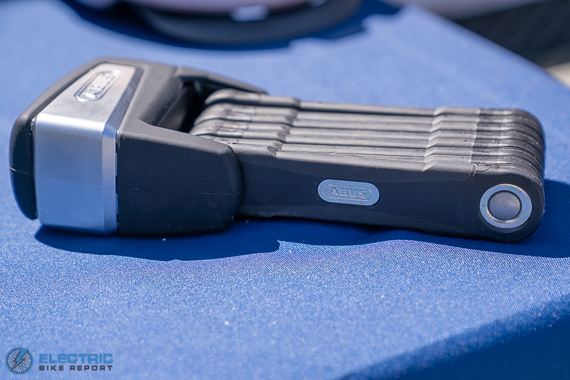 Despite its hefty anti-theft rating, the Bordo folds up pretty nicely. 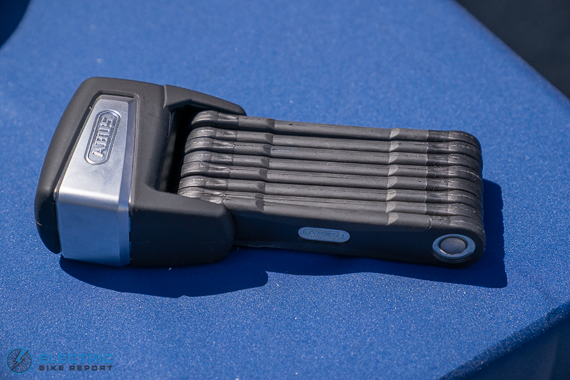 It’s a keyless lock, meaning it pairs with your smartphone and is unlocked through an app.

At the 2021 edition of the Sea Otter Classic, someone accidentally set off the alarm on the ABUS Bordo 6500 Smart Lock, but unfortunately nobody knew how to turn it off, so it just kept going and going….

This year, the rep giving is a demo on the lock assured us he had the app downloaded on his phone and paired with the lock, so should it get tripped again he’d be ready.

The ABUS Bordo 6500 Smart Lock is a folding style lock that syncs with your phone and will squelch out a 100db alarm should it get messed with. The main body of the lock is made of riveted hardened steel shanks that fold up compact when not in use, but unfold and wrap around your bike’s frame for some of the highest level of protection ABUS soffers.

It’s totally keyless, so anyone in your family or friend group can pair with it and use it.