Call this Hiplok D1000 bicycle lock review tempting providence, but this hunk of angle grinder-repelling, Ferosafe-reinforced metal is the closest to theft proof of any D-lock we’ve ever tested, researched or heard of.

If there’s anything bicycle commuting has taught us it’s that the above statement is probably bad karma, but we’ve got good reason to tempt the fates with this one. Why? Because Hiplok designed the D1000 specifically to ward off the bike thief’s weapon of choice: The high powered angle grinder. 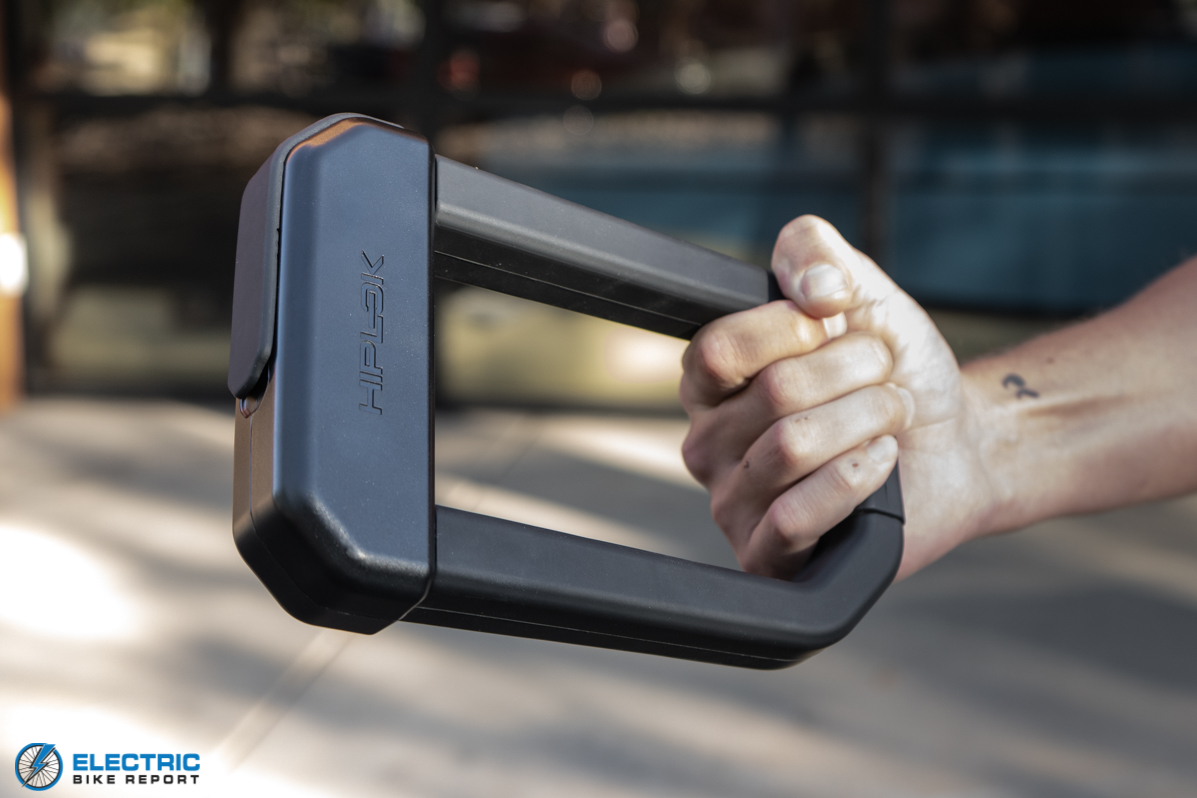 At first glance it looks like an average D-lock, but this one turns angle grinder blades to dust.

So naturally, when Hiplok sent us a media sample of the D1000 the Electric Bike Report’s first instinct was to do what any other reasonable person would: Let’s bust out the angle grinder and try to cut it.

Just after we received our Hiplok D1000 and before we could put a grinder to it, the Electric Bike Report team took a trip to the Sea Otter Classic in Monterey, California, where, coincidentally, Hiplok had a D1000 and a grinder set up and ready. We fitted the grinder with a new blade and let the sparks fly, with that blade lasting all of ten seconds before disintegrating to a useless size.

We were far from the first people to try and cut the lock. The damage we did — the blade cut a little more than an eighth of an inch into the shackle before breaking — was in addition to dozens of other cuts into the same lock, but nevertheless the lock was still holding strong. 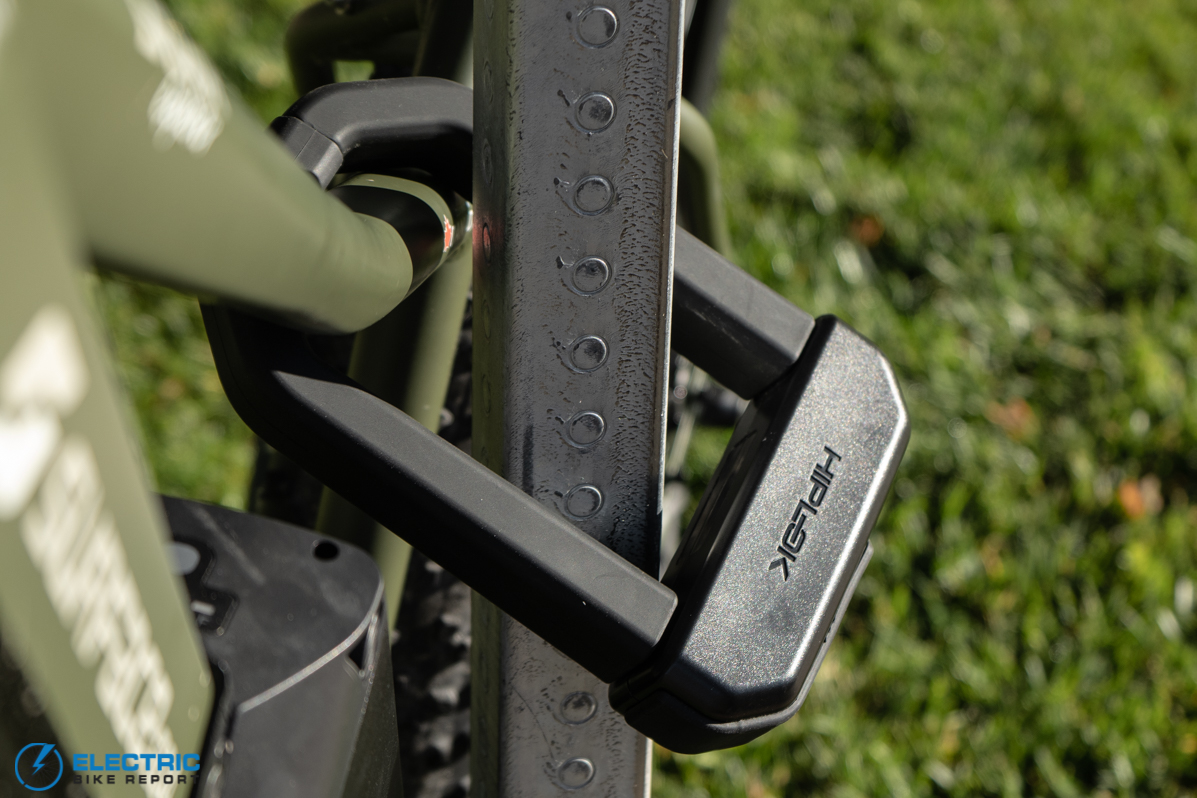 It’s by no means an oversized D-lock, but it’s plenty large for most bike racks, sign posts, etc. 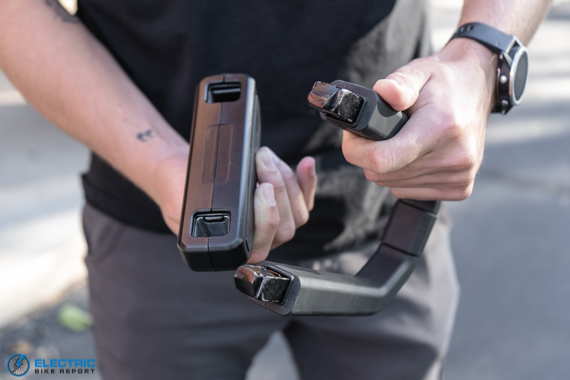 The square shackle shape prevents would-be thieves from cutting one arm of the lock and rotating it to free the bike. It would likely take multiple cuts to get through this one. 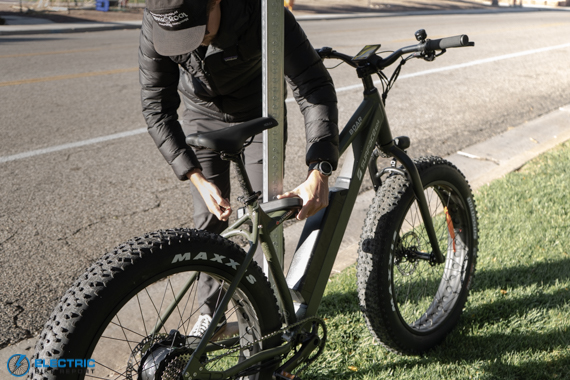 It’s a little heavier and a little larger, but the D1000 functions just like any other D-lock we’ve used.

In addition to the Ferosafe anti-angle grinder tech, Hiplok has also given the shackle a square profile and a hardened steel core to guard against bolt cutters (we’d love to see someone try to get through the D1000 with a set of bolt cutters). It’s also got a locking mechanism that prevents the shackle from rotating off if it does get cut and a really smooth locking action that’s very user friendly. It’s about the same size as an average traditional D-lock and weighs a touch more. 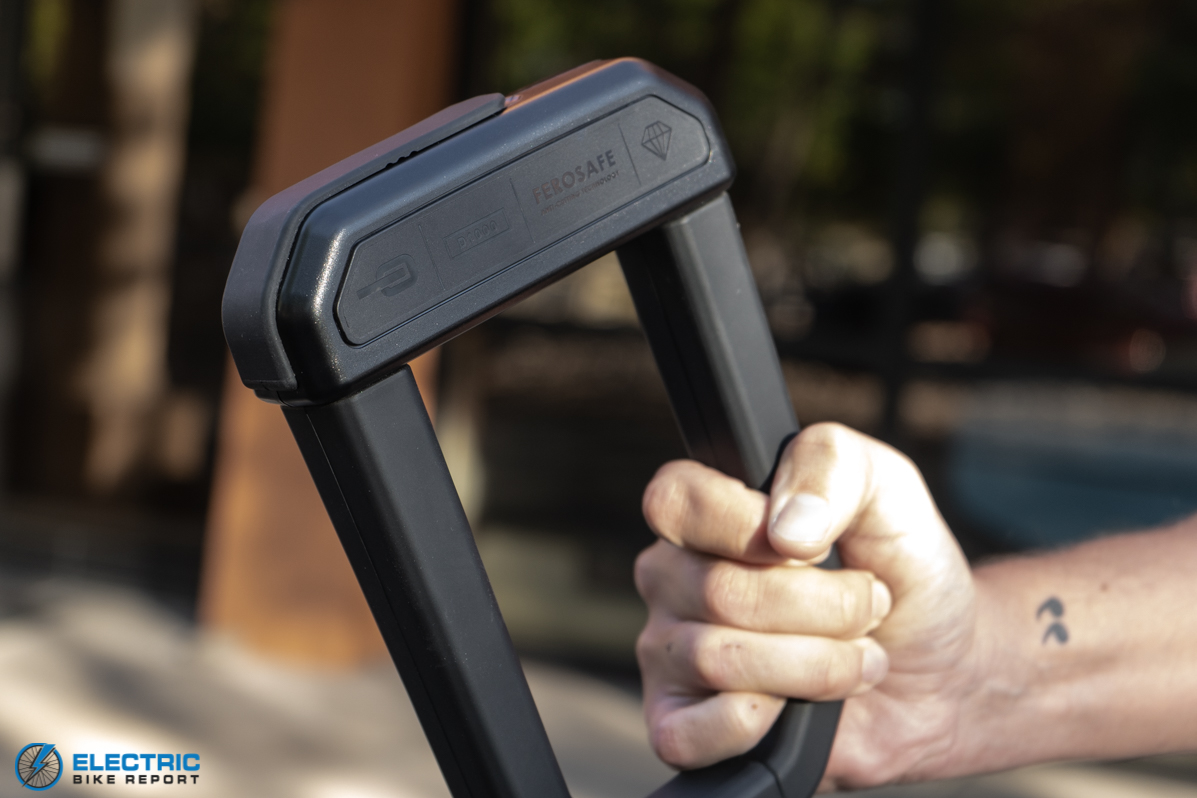 Ferosafe and a Diamond rating.

Those who’ve traditionally shoved their D-lock into their belt for carrying may find that a little tough with the D1000. The shackle is quite a bit wider than your average D-lock and I had a hard time carrying it anywhere but in a backpack, though Hiplok does make a special pouch for the lock you can attach to your bike or belt loops.

Like any other product at the top of its class, the Hiplok D1000 commands a hefty price tag for a bike lock with an expected MSRP of $345 USD. The project is currently in the waning hours of a Kickstarter campaign that offers some savings on the lock, but there’s just about a day remaining until the campaign ends at the time this review was published.

Thanks for reading our in-depth look at the Hiplok D1000 bicycle lock review. What are your thoughts or questions about the lock? Let us know in the comments below!