Don’t worry if you are confused about the laws surrounded electric scooters – it seems much of North America is too, including lawmakers themselves. Even the naming is confusing – just to be clear when this article refers to electric scooters we mean what are also known as kickscooters and not the small step-thru motorbike type objects that can also be referred to as scooters.

Electric scooters have taken the US by storm, having gone from rarity to reality over the last few years, especially public share rentals run by the likes of Bird, Lime and Spin. But these are rentals specifically authorized, usually by particular city authorities, that only authorize the deployment and use of that particular company’s electric scooters. 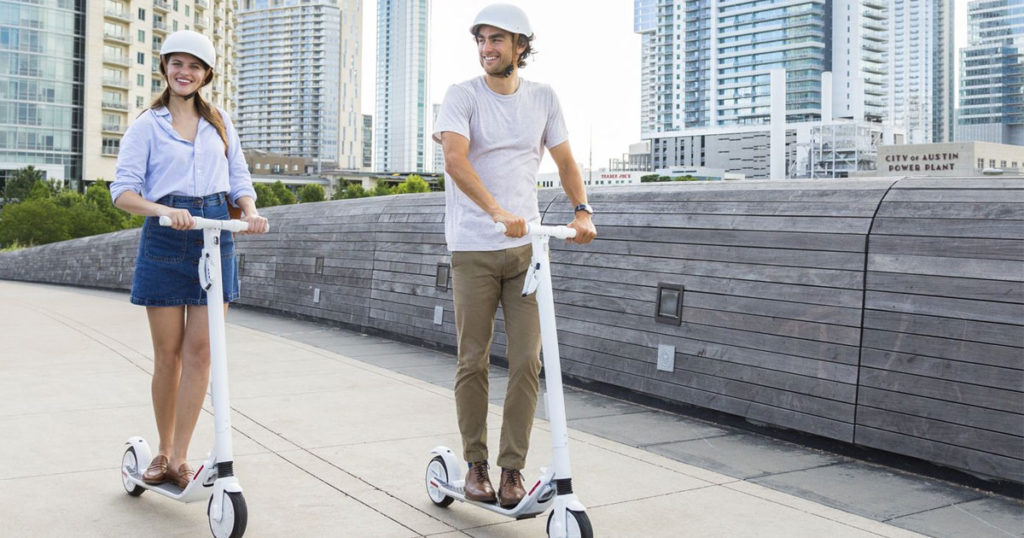 But what about if you fancy the convenience of owning and using your own electric scooter where you live or work? Unfortunately, the state of electric scooter law is only just beginning to emerge in the United States and varies from state to state and even city to city. But before we take a look at different regulations on electric scooters across the US and Canada and look at the most commonly asked questions about them lets get an overview of federal legislation.

Actually there isn’t any Federal Law specifically on electric scooters – The Consumer Product Safety Act of 1972 was amended by Congress in 2001 so there is now a national  definition of e-bikes in the US as they are classed as ‘a two- or three-wheeled vehicle with fully operable pedals and an electric motor of fewer than 750 watts (1 h.p.), whose maximum speed on a paved level surface, when powered solely by such a motor while ridden by an operator who weighs 170 pounds, is less than 20 mph (i.e., a low-speed electric bicycle).’

The above doesn’t tell you where the e-bike can be used, it only gives a legal definition of it. Since then People for Bikes has done brilliant work lobbying for the three-class law now adopted by 28 states across the US which does tell e-bike riders where they can ride along and states have also legislated on a host of other issues for e-bikes like whether helmet use and insurance are also mandatory – clearly many of the legal issues relating to e-bike use also relate to electric scooters.

Electric scooter law hasn’t got to this stage as electric scooters are not included in the Consumer Product Act – in other words there are no nationally prescribed legal safety standards. However there is a voluntary codes (in addition to some state and local laws) – the most prominent voluntary safety standard for electric scooters is devised by US company UL. This standard tests and evaluates electrical and fire safety aspects of e-scooters and similar devices such as hoverboards but doesn’t really address mechanical or operational safety.

The American Society for Testing and Materials announced that its Consumer Products Subcommittee on Powered Scooters and Skateboards (F15.58) would bring stakeholders together to discuss and develop a proposed standard on electric-powered scooters that would establish performance requirements and corresponding test methods to minimize common potential hazards associated with electric scooters.

(Thanks to this Crowell Moring article at Lexology which was used to research much of the above section.)

Despite this lack of federal guidance on manufacturing and performance standards, some US states clearly have made an effort to bring their laws up to date with the event of electric scooters on the ground. This NCSL article tells us that as of January 2020, 21 states have enacted laws defining e-scooters and distinguishing them from mopeds and other vehicles requiring registration and insurance.

States With The Clearest eScooter Legislation

It’s fair to say that some states have been quicker than others to pick up on the electric scooter trend and to legislate for it so that people know how and where they can use e-scooters. Let’s take a look at what some US states legislate regarding e-scooters – if your state isn’t covered the listings provide a good guide to the areas you should be researching for your own state and locality.

Some states have no specific e-scooter laws but class them as motor vehicles, for example as mopeds, This can entail requirements for insurance and licencing but it may well in practice prove impossible to obtain such things. All of which throws into relief the impressive efforts the following states have made to clarify the legal position of e-scooters and so facilitate their daily use. 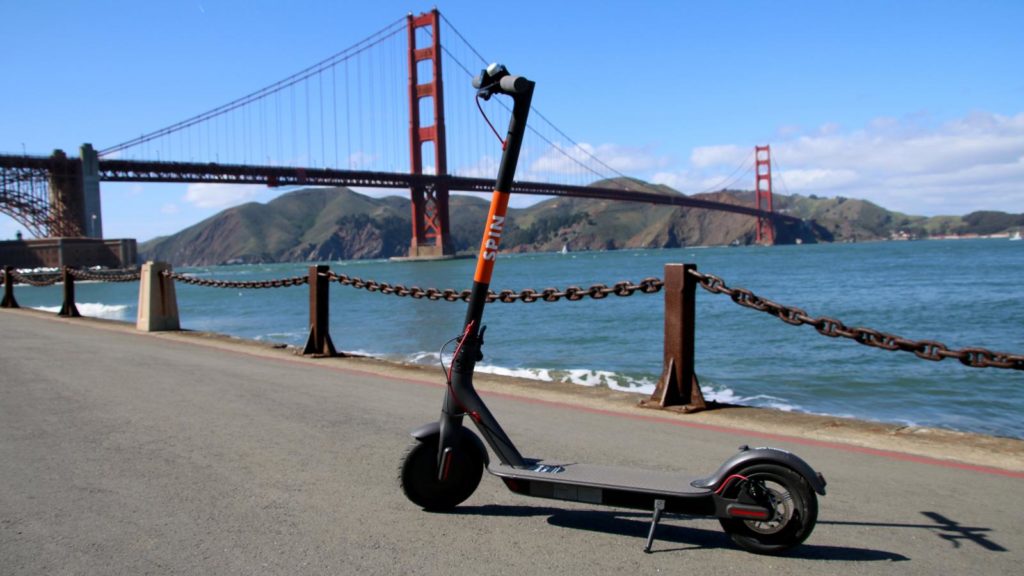 California was one of the first states to respond to the e-scooter craze and the California Vehicle Code has quite a lot to say about them.

Max Speed  Most states set their e-scooter speed limit at 20 mph a few going for 15mph and California is in the latter camp. CVC §22411 regulates e-scooter speed and going over it can result in a $250 ticket.

Helmets Mandatory? For under 18s only

Where are they Allowed? E-scooters must be ridden in bike lanes (or bikeways, bike paths, bicycle paths etc) whenever one is available.

The law only allows for 4 exceptions to riding in a Class II bike lane:

They are expressly prohibited from sidewalks and crosswalks.

Do I Need A Licence and How Old Must I Be?

Operators must be at least 16 years old and have a driver’s license or learner’s permit. Tickets for contravening this are usually around $200.

E-scooters though are exempt from registration, and license plate requirements, and, for those purposes, says the vehicle code ‘a motorized scooter is not a motor vehicle’.

Note the front light and rear reflector can be substituted for suitable rider-worn ones.

Other Rules to Note

These rules are meant to prevent scooter accidents.

CVC §21221 makes specific mention of driving under the influence of drugs or alcohol. Drunk E-scootering can lead to a DUI charge, as well as a traffic ticket of around $350. 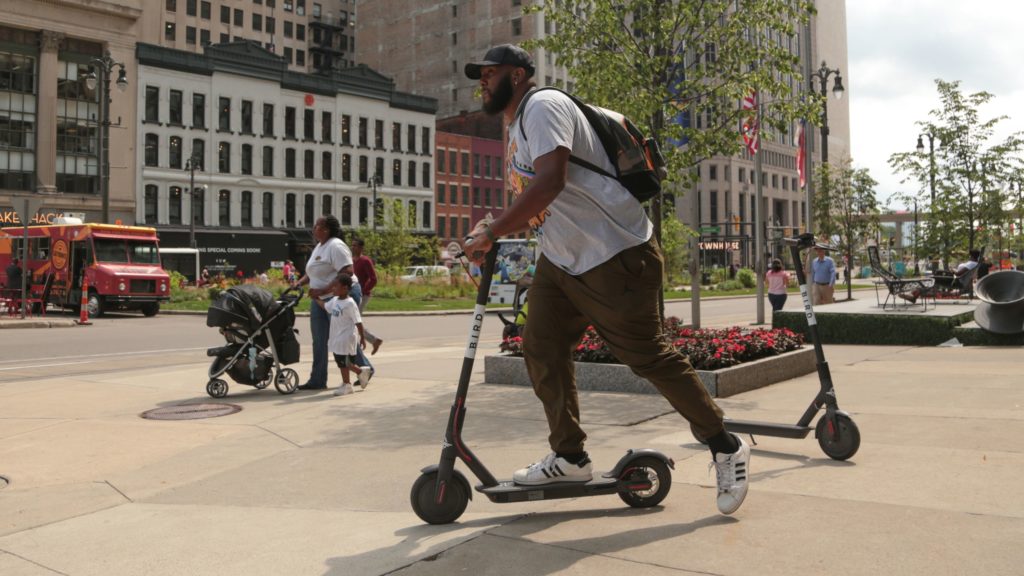 Is this an electric skateboard? It is in Michigan, apparently…

The 2.5kw seems insanely generous and the 25mph limit pretty generous too, but what about other regulations?

Helmets Mandatory? According to Michigan electric scooter laws, only a scooter or electric skateboard operator who is under 19 years of age must “wear a crash helmet on his or her head.” (MCL 257.658(4))

Where are they Allowed?

Electric scooters are allowed on public roads but must do the following:

Unusually you can ride on a sidewalk but must “yield the right-of-way to a pedestrian” and you must “give an audible signal before overtaking and passing the pedestrian.” (MCL 257.660(5)

Do I Need A Licence / Insurance and How Old Must I Be? It appears licences and insurance are not needed as only vehicles defined in Michigan’s No-Fault auto insurance law must be covered by licencing and car insurance. Electric scooters do not meet the definition of a “motor vehicle”.

Whatever the intention of the 2018 lawmakers it appears they have created some of the most liberal electric scooter laws in the US, be it by accident or not…

Note Michigan Auto Law’s help notes on this subject were used to research the above. 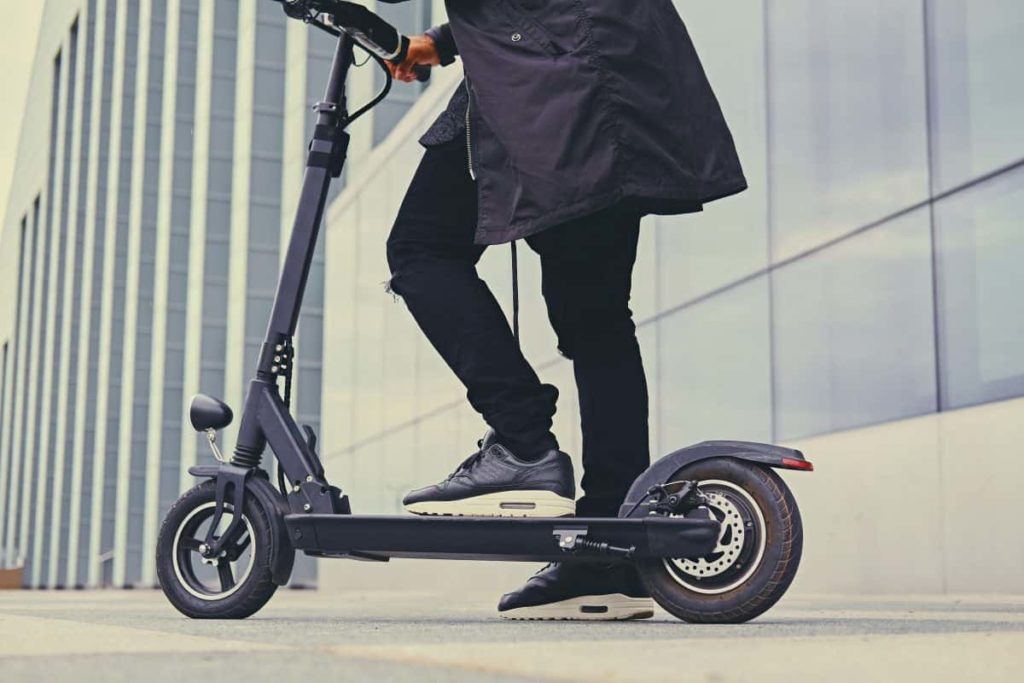 Indiana’s main e-scooter legal provisions, according to Avnet Law, are: 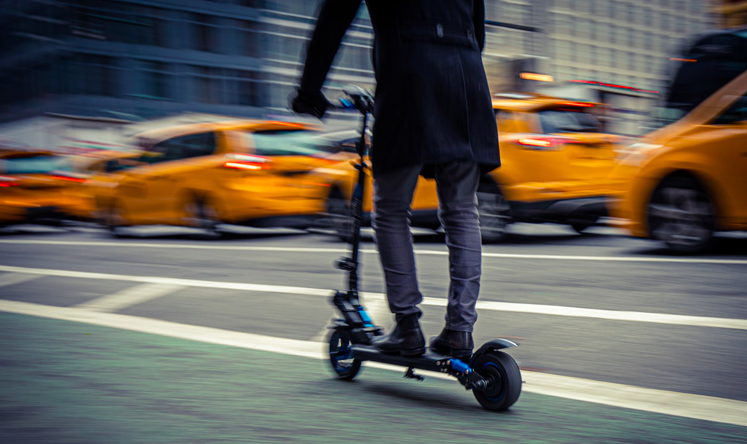 New York state has had a turbulent history when it comes to explicit bans of various kinds of electric micromobility. However, as of 2020, riders can once again operate electric scooters that can travel up to 20 mph on the streets of NYC, granted that they’re over 16 years old and wear helmets if they’re under 18.

Main rules and regs are now include the following:

Do always check both your state and local regulations – local regulations can vary state laws on e-scooters or in some cases they can choose to ban them altogether as has happened in places such as Beverley Hills or Bossier to give just two examples amongst many.

Learn The Laws Before You Ride

While some states are to be commended in clarifying the lines on what is and isn’t allowed on an escooter, not all 50 states have reached the same level yet. Do some research at the state, county, and local level before you rent or purchase a scooter of your own. If the laws aren’t clearly defined, see if you can reach out to your legislators or any local groups advocating for clear laws to be made. As always, remain safe above all else, and have fun while you ride!