It is shocking that in parts of Australia the transport sector accounts for around 25% of our greenhouse gas emissions. There has been an urgent need to address the rising pollution, traffic and road congestion.

Sydney is dealing with the challenge of improving the sustainability of its transport system with Sustainable Sydney 2030 Strategy. Part of the strategy is The City of Sydney Cycle Strategy and Action Plan 2007-2017. It is a part of the City’s commitment to achieving a sustainable future by making riding a bike an attractive choice of transport, whilst reducing carbon emissions, improving health and reducing car dependence.

Building a bike network was considered an important step towards a sustainable transport network, with 84% of those surveyed saying that they wanted safe routes and separate cycle ways for bike riders to maneuver through the city, thus giving Sydneysiders greater choice in alternative transport options.

The Cycle Strategy and Action Plan was adopted In April 2007, with a commitment to build a 200 kilometer, safe, convenient and sustainable bike network (which will include 55 kilometers of separated cycle ways) by 2016.

This ambitious cycle network plan has the potential to take 300,000 car trips a day off inner Sydney roads and relieve overcrowded public transport routes into the city, as well as increasing the number of bike trips made in the city from 2% to 10% of all trips by 2016.

The major benefits of the Bicycle Network 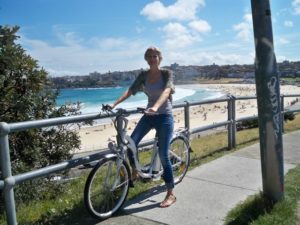 As Sydney grapples with the challenge of improving the sustainability of its transport system, it is also faced with the additional challenge of catering to the mobility needs of an ageing population and baby boomers, many of whom are heavily reliant on cars.

The electric bicycle plays a vital role in resolving this issue, with their power assist technology, giving older people or those who are less fit the opportunity to use this eco friendly option, whilst getting the additional power assistance when required. You can choose whether to pedal normally or to use the motor to make it easier, so it is a great way for people who are older, less fit, or have injuries to get into biking.

The Sydney Cycle Strategy supports electric bicycles as a vital alternative transport option. Electric bicycles with less than 200 watts of power are also legally allowed on the City’s cycle ways without the need for registration or a license.

With the huge improvements in technology, an electric bike is becoming increasingly popular among those looking for an efficient, cost-effective, and environmentally friendly way to commute.

Reef Bikes is a Sydney Electric Bikes company, established with the goal of providing a fun, fast and easy way to commute, and with the added power assist, making them more accessible and thus more mainstream. Reef Bikes hopes to open up the world of cycling and its many health benefits to people who would normally get around just by car.

Reef Bikes believes that the major benefits of cost savings, reduced traffic congestion, health benefits and zero carbon emissions are hard to beat and are perfectly in line with Sustainable Sydney 2030 Strategy.

Here is a video from Reef Bikes highlighting the benefits of riding an electric bike.

It sounds like electric bikes will be a perfect fit for Sydney’s plan!  With a safe and convenient network of bike paths would you be more inclined to get around town via e-bike?  What are other factors would make you more likely to jump on your electric bike and leave the car at home?

Please leave your comments and/or questions below.