In this Week’s News: 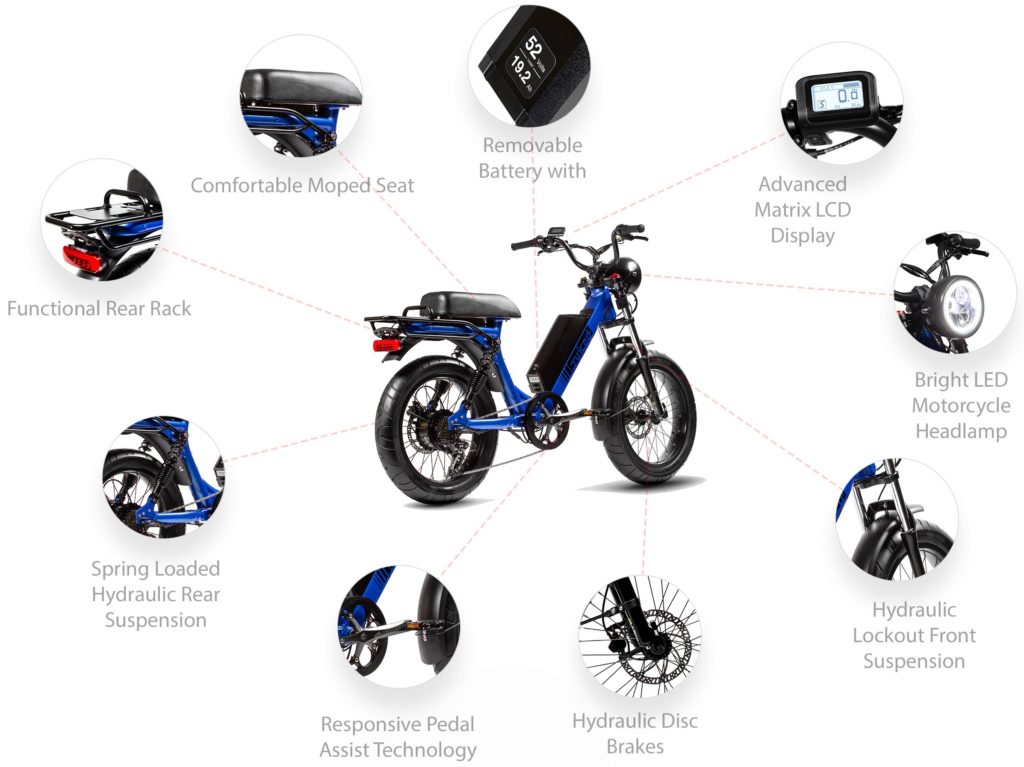 The Juiced Scorpion has plenty of motorbike features though the basic model is a class 3 e-bike in the US, legally speaking

The Juiced Scorpion was launched at the end of last year and though it looks like a moped-cum-motorcycle it is, legally speaking, a US class 2 and 3 e-bike with throttle assist to 20mph and pedelec style assist to 28mph. It is even marketed under the slogan  Where Moped Meets eBike.

The Juiced HyperScorpion, on the other hand, on the surface looks like pretty much the same bike but the motor rating and top speed make the crucial difference. This point was picked up in this recent interesting Forbes article where the author notes ‘Everyone who sees the Hyper Scorpion asks the same question: “Is… that an electric motorcycle…?” Well, yes, sort of, but it also has pedals and a rear derailleur, like a bicycle. However, the form factor of the Hyper Scorpion is definitely much more akin to recent market entries like the Super 73 ebikes, which have more of a scooter/moped stance, but are also still pedalable ebikes. But as you’ll see, the Hyper Scorpion isn’t just one or the other, it’s really both.’

It does beg the question if current technology allows manufacturers to make e-bikes that double as mopeds should the law be flexible enough to allow an electric moped – bought and run legally as such – to become and electric bike at the flick of a switch? I’m not talking about ultrafast e-bikes here or indeed full speed motorbikes being allowed on bike paths, more low speed mopeds – the Netherlands after all does allow some classes of low speed (petrol or electric) mopeds to travel in some cycle lanes whilst higher speed ‘speed pedelec’ e-bikes and higher speed mopeds are not allowed there. 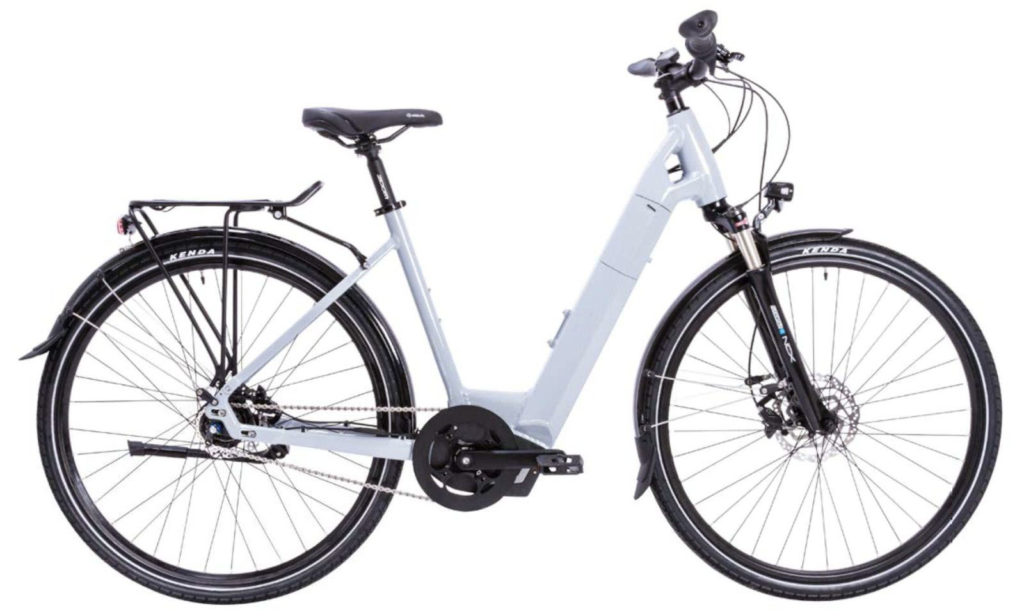 The UK’s 50 Cycles have launched a new range of four own-brand e-bikes and a foldable e-scooter. The bikes range from £2595 to £3995 and all use various models of mid-drive motor from the very well-respected Brose. Video reviews below: 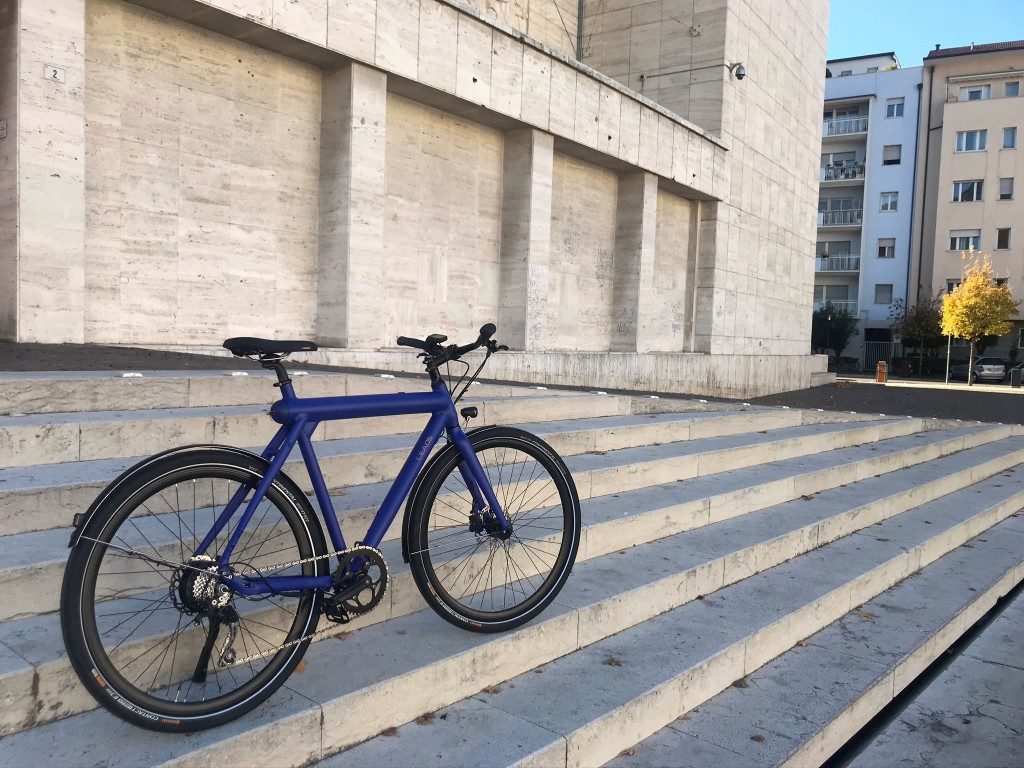 There are already a plethora of smoothly-designed urban e-bikes that try to hide the fact they are e-bikes – think of models from Van Moof, Cowboy, MODMO, Schindelhauer and COBOC for a start and you see this is something of a continental European trend with the emphasis on design minimalism and light weight.

LEAOS’s Rocket is the latest to enter the fray it offers a small 40Nm rear hub, fully integrated top tube, removable 360 Wh battery, the option of a single speed Gates Belt Drive or eight derailleur gears and hydraulic disk brakes (note some of the aforementioned competitors do not have removable batteries or more than one gear). Options include gravel bike style handlebars and GPS tracking unit. Quoted weight is from16.5 kg , price from €3250 and delivery is touted for February 2021.

Recently we looked at how Rob Rides EMTB built up a relatively cheap e-mtb himself using a carbon fibre frame ordered direct from China and a Bafang M500 mid-drive. He’s followed up with a ride test that gave an honest opinion on the highs and lows of the bike.

Chrome are known for their high quality apparel and bags. 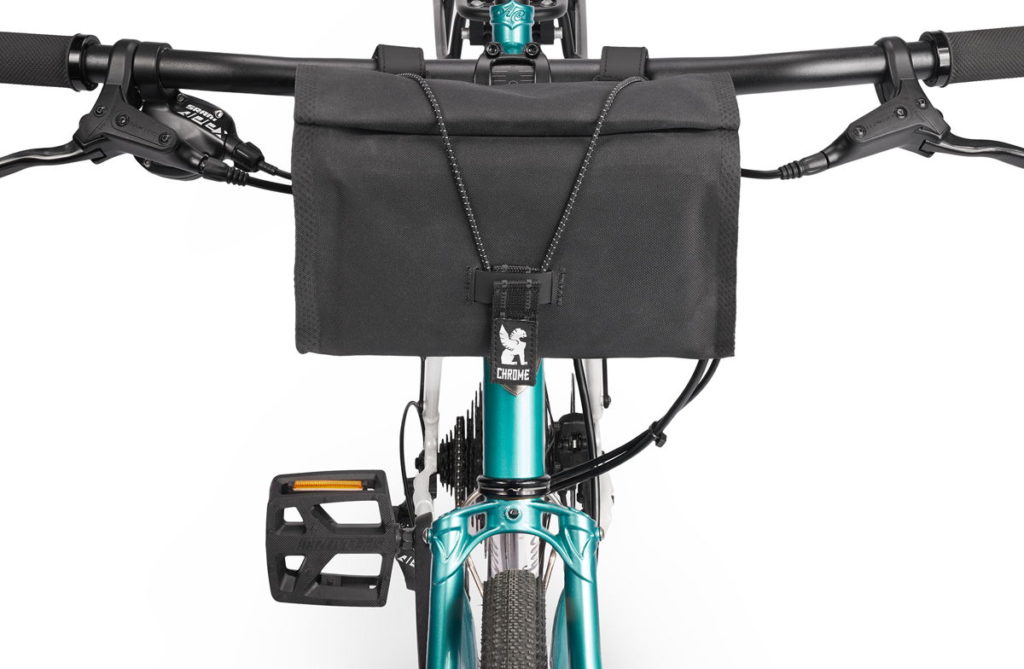 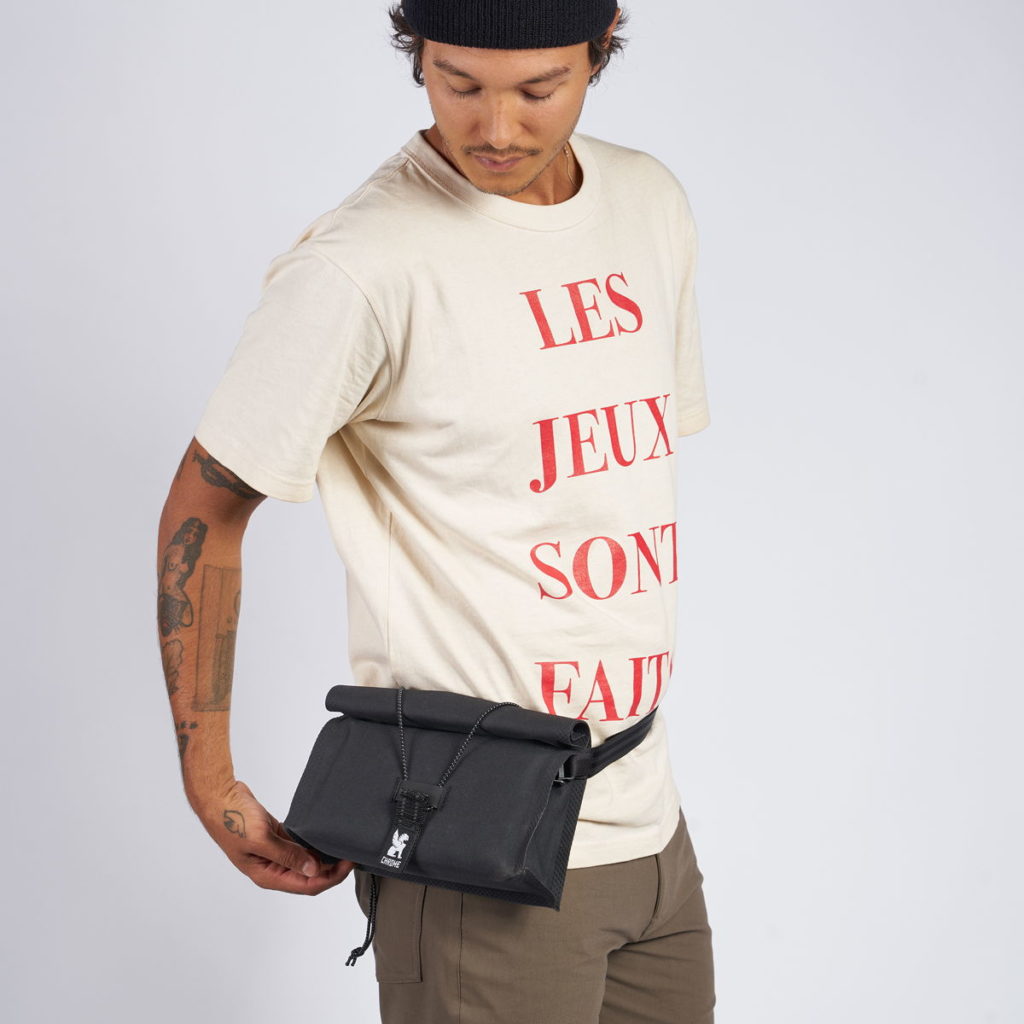 Now Chrome’s Urban Ex lineup of bags gets two new additions with the Urban Ex Handlebar Bar 2.0 (US$70) and 26L Rolltop pack (US$120).
The bar bag has a simple exterior and padded interior, and is fully waterproof when the top is rolled down. Chrome say it’s a great “every-ride-carry” option, and converts to shoulder sling with the included strap. 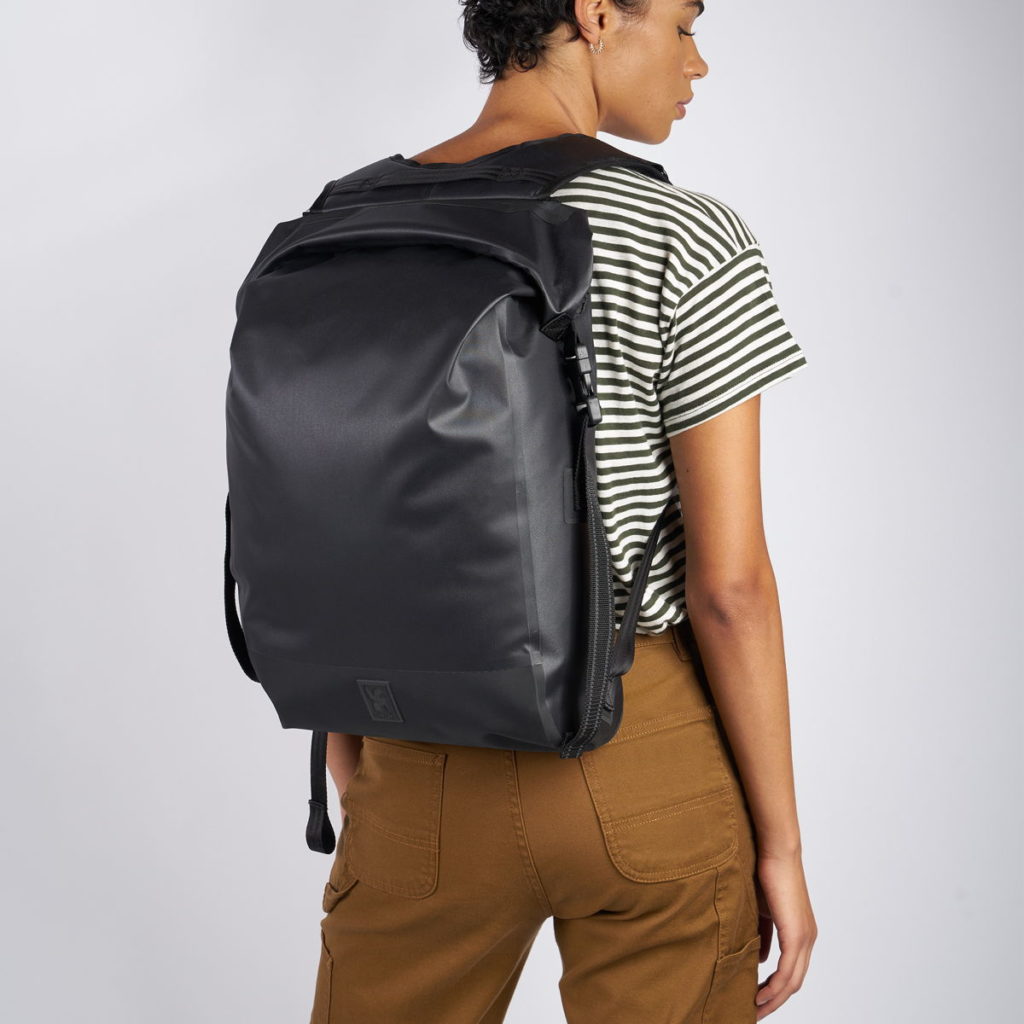 Similarly waterproof and with an internal laptop sleeve that fits up to a 15″ Macbook, the Urban Ex 26L rolltop bag is just the right size for any kind of daypack use. 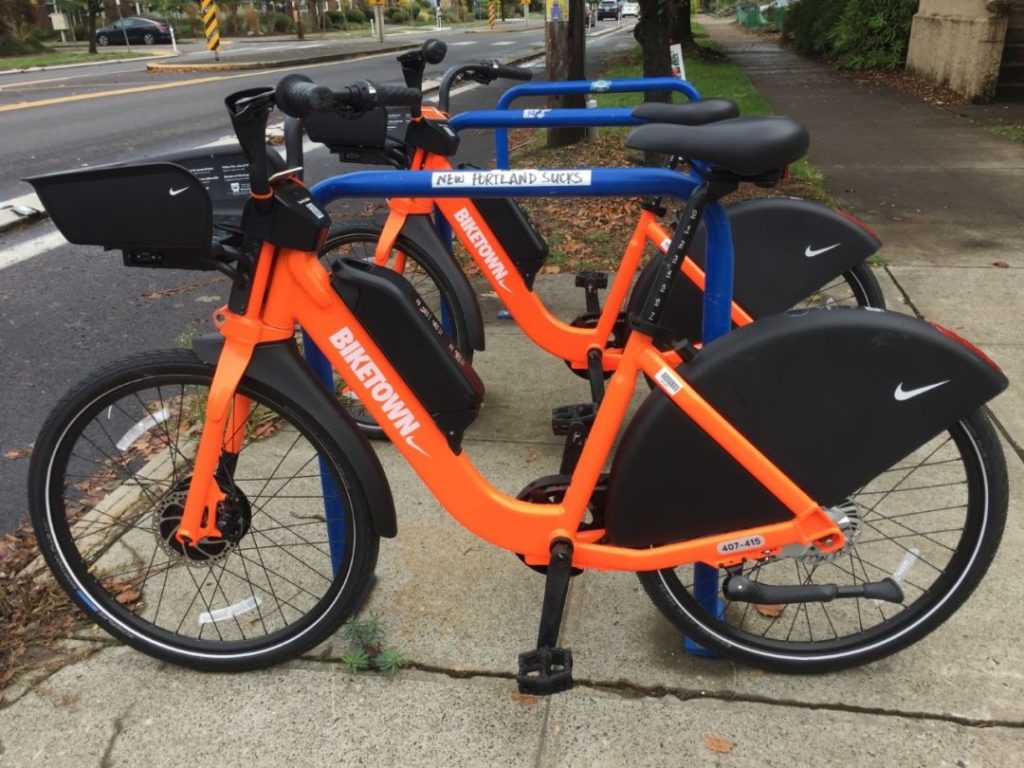 We have reported on Portland Oregon’s 1500 strong e-bike only sharing program before but now comes more good news on how it will be run and maintained.

You might think that heavy snow covering cycle lanes scotches most cyclists riding plans. The city of Oulu in Finland clearly has other ideas as you can see in this excellent video from Amsterdam-based Not Just Bikes. Cold is not the issue, snow is not the issue according to Not Just Bikes – yes you guessed it, you just need a proper cycle lane network that is properly looked after by very regular ploughing in winter…

Irish Cycle reports that ‘A promise to support up to 248 new jobs focused on walking and cycling infrastructure and promotion was announced by the Department of Transport.’ The article adds ‘…it is expected that up to 218 staff could ultimately be assigned to the new active travel teams across all local authorities with a further 30 additional staff available through the Regional Design Offices.’

However, the article also notes some resistance to the idea of Dutch-style infrastructure, saying ‘The National Transport Authority in Ireland has started a review of the National Cycle Manual, but this comes after long delays in that process and the original drafting of the manual also subject to delay. National Transport Authority has also been reluctant to accept Dutch designs for infrastructure elements such as protected junctions and bicycle priority roundabouts.’ 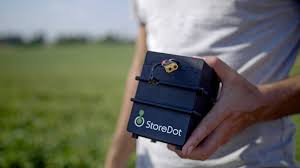 The UK’s eBiketips has detailed claims from Israeli company StoreDot that it ‘has produced an “extreme fast-charging” battery for electric cars after first demonstrating its technology in electric scooters and phones.

As ever with stories of revolutionary new battery technology EBR sounds a note of caution – reading the detail of the company’s background in car battery research, a piece in the Guardian makes it clear StoreDot’s targets for widespread rollout are still some way down the line; ‘The batteries can be fully charged in five minutes but this would require much higher-powered chargers than used today. Using available charging infrastructure, StoreDot is aiming to deliver 100 miles of charge to a car battery in five minutes in 2025. ‘

eBiketips says ‘StoreDot’s battery replaces the graphite used at the electrode in current lithium-ion batteries with semiconductor nanoparticles into which ions can pass more quickly and easily. These nanoparticles are currently based on germanium, but a second-generation, silicon-dominant prototype battery is due to be unveiled later this year.’

The first acid test of the technology will be StoreDot’s commercial release of a scooter battery due out later in 2021. EBR will keep you posted!

If you think e-bikes are a pretty modern invention think again. This 1985 clip tweeted by Vala Afshar shows the idea was touted as the very latest thing back then – in fact e-bikes had been around in the years prior to that. They idea no doubt underwent a minor resurgence in the UK 1985 when Clive Sinclair launched his infamous C5 and the UK law was changed to allow small electric powered vehicles on the road.

1985: Will these new electric bicycles ever catch on? pic.twitter.com/TOEwcN0MPY

Will the Idaho Start (or is it Stop…) Get Through New York’s Senate?

Streetsblog reports ‘An upstate State Senator has introduced a bill that would allow cyclists to slow-roll through stop signs and go through red lights after a quick full stop — a safety solution to the problem of cyclists losing forward momentum even if the coast is clear.’

The so-called “Idaho stop” earned its name because Idaho was the first to pass a rule allowing cyclists to keep going and stay ahead of car traffic.

“I have biked to work for years, and I’m always interested in making it safer and more sensible,” said Sen. Rachel May (D-Syracuse), the chief sponsor of the bill, S920.

The article adds ‘Advocates for cyclists and for cycling have long supported the Idaho stop, which is legal in one form or another in five states and several Colorado counties. Arkansas legalized it in 2019. Washington State’s version went into effect late last year.

Call for EU Driving Licence to Exclude All 30kmh Vehicles

The European Union is currently reviewing the effectiveness of its driving licence legislation. LEVA-EU is lobbying during the process for any vehicles with a maximum motor speed of 30 km/h (around 19mph) to be exempt from driving licence requirements.

‘The maximum speed limit in current type-approval and driving licence legislation of 25 km/h should be increased to 30 km/h. This limit has become widely introduced in urban areas. An alignment of the speed limit for the vehicles is necessary to allow them to go safely with the traffic flow’ says LEVA-EU.

Bicycle Retailer and Industry Reports that ‘Several industry sources have confirmed that Trek has agreed to buy at least a dozen of Mike Olson’s bike shops, including the six Trek Bicycle Superstore locations in the San Diego area and in Albuquerque, New Mexico, one Nytro Multisport store in Encinitas, California, and the six-store Bike Gallery chain in the Portland area. Olson is believed to be Trek’s largest retailer and one of the largest bike retailers in the country.’