Should the weather foul and sun turn to rain while you’re out riding your electric bike, you and your bike should make it home OK.

Most e-bikes are safe to ride in the rain, though there are some exceptions and important things to know about your specific e-bike before you and your bike go traipsing out in a late-summer monsoon. Most importantly, check with the manufacturer of your bike to see if it’s rated for riding in the rain, but there are a few additional considerations that may be useful for wet-weather riding.

These wet-weather riding considerations include the type of equipment you’ve got on your bike — including fenders, weatherproof accessories and capable tires — to riding best practices, including braking early and slower cornering, among some other things. 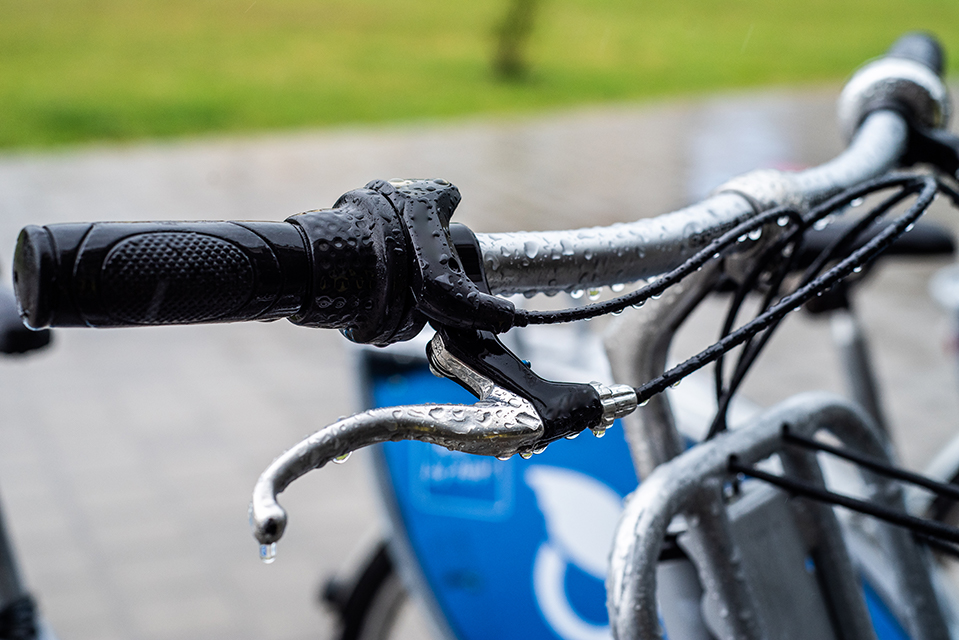 Many e-bikes can be safely ridden in the rain, but there are a few important things to know before you try.

In this post we’ll dive into how to figure out if your e-bike is ready for riding in the rain and how to prepare yourself for contending with inclement weather. We’ll also share some of the Electric Bike Report team’s personal tips for wet-weather riding, because like many of you, we also don’t often let a little rain get in the way of our riding.

Many e-bikes are water resistant, which means they can withstand light rain, splashing and, in some cases, even washing with a non-pressurized hose. But this does not mean they are waterproof.

Never fully submerge your e-bike in water and heavy rain should be avoided. Even washing with a hose can be problematic — routine cleaning with a damp rag is OK, but never use a pressure washer on your e-bike and avoid using a garden hose unless your e-bike’s manufacturer explicitly says that’s OK.

Most e-bike manufacturers will give detailed information on how much moisture, if any, your bike can handle. The popular U.S. e-bike brand Rad Power Bikes, for example, gives detailed instructions on their website for how to safely ride their bikes in wet weather and even gives instructions on how to safely clean their e-bikes, which includes a warning to never use a hose on a Rad e-bike.

Several other e-bike brands reviewed by Electric Bike Report give similar advice for using their bikes in the rain: Gentle rain and non-pressurized water is largely OK, but full submersion or heavy rain is not.

Under any circumstance, you should take steps to dry your e-bike after it gets wet, with particular attention to the bike’s electrical components. It’s best to even remove the battery (if you can) to dry the battery compartment and the metal leads inside. Wipe down the rest of the e-bike with a dry, clean rag to get any residual moisture off other components.

While most brands give general guidance on if it’s safe to ride their e-bikes in the rain, some take it a step further and get their componentry formally rated for water resistance. This is called an IP rating, which stands for “ingress protection” and gives consumers a clear picture of how protected their electrical equipment is from solid and liquid intrusion (most often dust and water for our purposes).

For example, Aventon e-bikes boast an IPX4 rating and the Turboant Thunder T1 electric fat bike, which we’re currently in the process of reviewing at the time of this post, is marked with an IP65 rating.

But what do these numbers mean? Let’s break it down.

The numbers correlate with specific levels of protection, such as the ability to withstand a steady stream of water or even immersion. There’s a total of eight rating levels for liquid resistance and six for solid resistance, and those are easily googleable so you can deduce your specific e-bike’s IP rating, should it have one.

Let’s do some examples using the Aventon IPX4 rating and the Turboant’s IP65 rating:

So Aventon’s IPX4 rating tells you that Aventon e-bikes have not been tested against dust intrusion (though that doesn’t mean it’s not resistant to dust) and the bike’s electrical components can withstand splashing water. That means Aventon e-bikes should be OK to ride in the rain and even through some puddles.

So the Turboant Thunder T1’s IP65 rating means its electrical components are dust tight and protected against jets of water, but not jets of water.

Tips for safe e-bike riding in the rain

Aside from the basic task of checking that it’s safe to ride your e-bike in the rain, there are some additional best practices that’ll make riding in foul weather safer and more enjoyable.

Fenders are never a bad idea, though I wouldn’t say they’re mandatory. The Electric Bike Report galactic headquarters is in the desert of southern Utah, which seldom sees rain. When it does rain, it’s brief enough we don’t really need fenders and if it does rain hard, it’s usually so severe you don’t want to be outside. Period.

If you do live in an area with frequent rain go with full-coverage fenders that wrap around one-third to a half of the tire’s diameter. Even on an e-scooter, the principal is the same — be prepared for rain and take care of your equipment.

Lights are also a good idea — in fact, I’m a proponent of always carrying at least a small light, even if I’m not planning on riding at night. This is more important so that you can rather than , especially if you’re riding near cars or other pedestrians. Rain can quickly hamper visibility, and even a small light can help ensure your presence doesn’t go unnoticed.

Slow down and take it easy in the corners. Just like driving a car on wet roads, your e-bike’s tires likely won’t hook up as well in the rain. Braking early and turning slower than normal are key to safe e-biking in the rain.

Layer up and plan ahead, because you know what’s worse than getting caught in an unexpected downpour? Spending the rest of your day in wet clothes because you didn’t bring a rain shell. This is perhaps most important for e-bike commuters, who I’d argue should find a way to keep at least a waterproof rain jacket in a pannier bag or their backpack at all times.

Clean and maintain your bike after getting caught in the rain. Wipe the whole thing down with special care to dry the electrical components and battery. Remove the battery if you can and dry the terminals and the compartment. But also be sure to dry and relube the chain, as water can strip lubricants off your drivetrain and degrade your shifting. Also avoid using compressed air to dry your bike, as this can just drive water into sensitive parts like bearings and electrical componentry.

Overall, a little rain shouldn’t keep you from enjoying your e-bike. Be sure to know exactly how much moisture your bike can handle, and take care to be prepared for inclement weather. But other than that, get out there and go pedal — rain or shine.