Though they’ve been embraced by nearly every major bike manufacturer and have all but saturated every corner of the U.S. cycling market, the debate over whether electric bikes are cheating is alive and well.

Bicycling has long been a sport with an elitist bend; tradition is sacred and it’s a staunchly held belief among many that you must suffer — at least a little — on the bike in order for your experience and effort to count. E-bikes don’t mesh well with that ethos, as if adding a little help to a person’s own pedaling somehow degrades the simple pleasure or utility of riding a bike.

Sound melodramatic? It absolutely is. Cycling is a sport full of people confusing endorphin highs with philosophical enlightenment; people who’d rather indulge in a morning of self-flagellation via bicycle than go to therapy.

But that view of e-bikes is slowly changing. In Europe, where e-bike sales are quickly encroaching on sales of traditional bicycles, e-bikes have gained considerable traction as an alternative transportation solution and as a more inclusive way to get more people of more backgrounds and fitness levels interested in the sport. There’s strong signs that the U.S. bike market is just a few steps behind. In 2020, fueled by the COVID-19 bike boom and a renewed interest in getting outside, e-bike sales in the U.S. grew 145 percent and outpaced traditional bike sales which were up 65 percent, according to market research figures published in the New York Times.

Many industry insiders all-too familiar with the bike industry’s boom-bust cycles are holding out hope that e-bikes, and the non-cycling public’s interest in them, hold the keys to a more economically sustainable future.

It would seem that e-bikes are here to stay.

Bianchi weighs in on if e-bikes are cheating 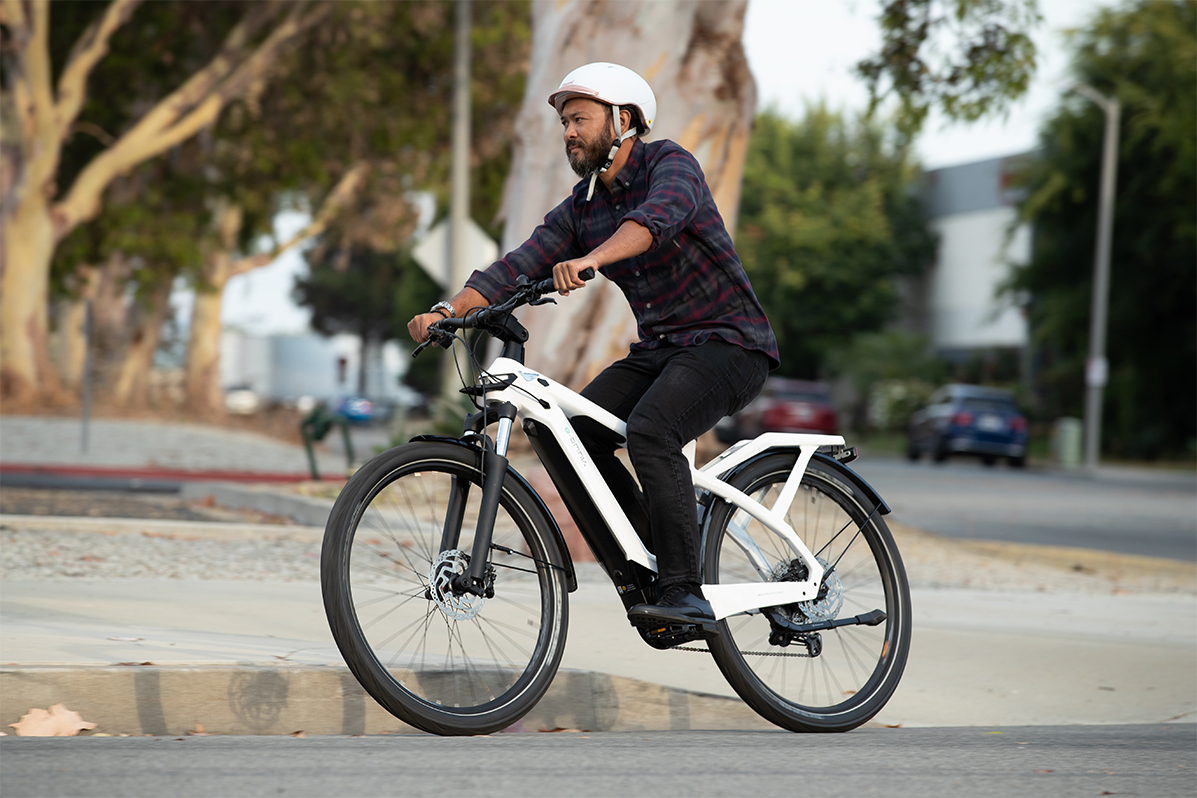 So, to get to the bottom of the “cheating” question, Electric Bike Report went to a brand that, for the last 133 years, has been an influential member of cycling’s upper echelon — Italian bike manufacturer Bianchi.

But in late June, Bianchi unveiled seven new e-bikes to the U.S. market including it’s E-Omnia family, a triad of e-bikes made of two commuters and an eMTB. Bianchi USA’s CEO Pat Hus said the new bikes — and their E-Omnia name, which roughly translates from Latin to “E-Everything” — is the first move in a new direction for the U.S. arm of the storied bike company.

“We have to be in the e-bike space,” Hus said during the E-Omnia premier at the Marconi Automotive Museum in California. “There’s just not a choice, and North America has been reluctant to try new things.” 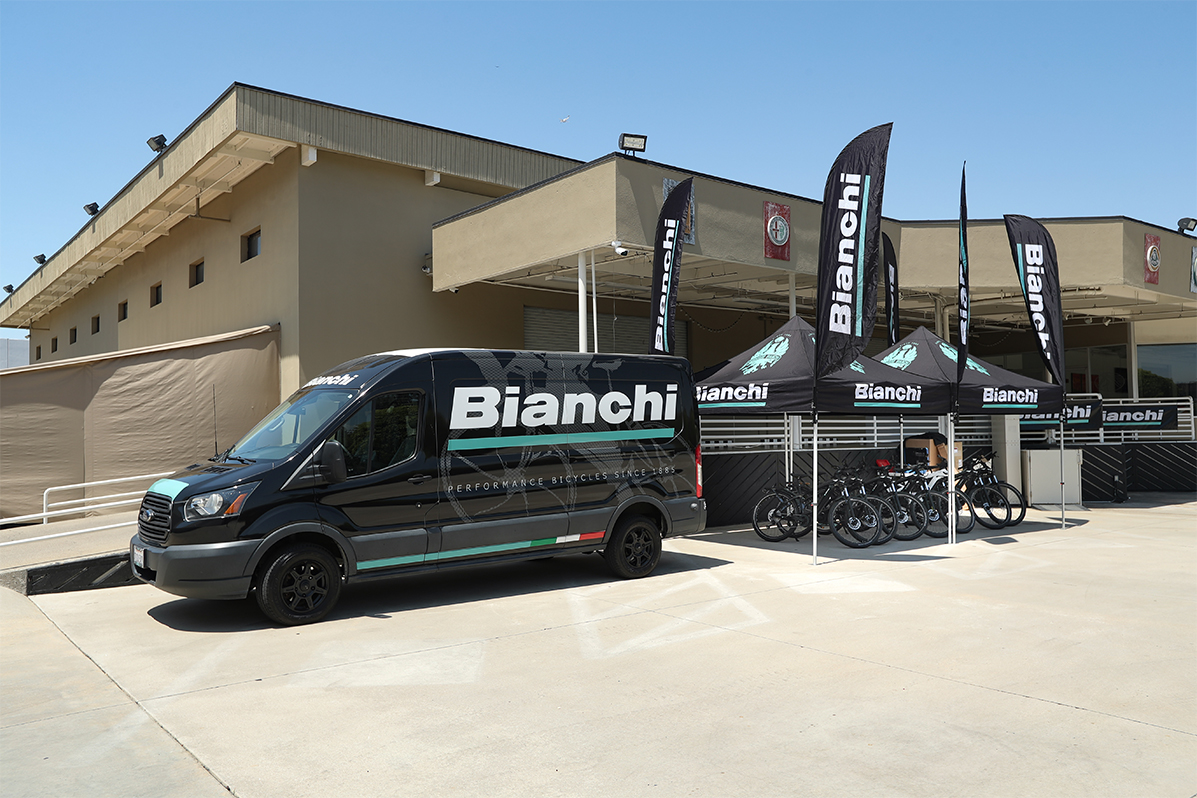 Bianchi unveiled its e-bike lineup to the U.S. market at a premier on June 28 at the Marconi Automotive Museum in Tustin, Calif.
Photo Credit: Courtesy Bianchi

Hus told a crowd of cycling press and dealers during the E-Omnia event that in three years he expects e-bikes to make up 40 percent of Bianchi USA’s sales. Road bikes, he added, currently dominate that figure at 90 percent. In the next six months, he told EBR, Bianchi has at least 12 new e-bikes they plan on bringing to the U.S.

But are e-bikes cheating?

“I’ve got an e-bike and I ride it when I want to go to the market or I want to go do something, but I’m out there on my (analog) road ride or on my mountain bike because I enjoy it,” Hus said. “I don’t feel like I’m cheating when I’m on my e-bike; there’s just sometimes I don’t want to ride a regular bike.”

Hus articulates here a point that many cycling enthusiasts seem reluctant to accept; that e-bikes aren’t here to replace traditional bicycles, but rather complement them in areas that they’ve never really caught on. 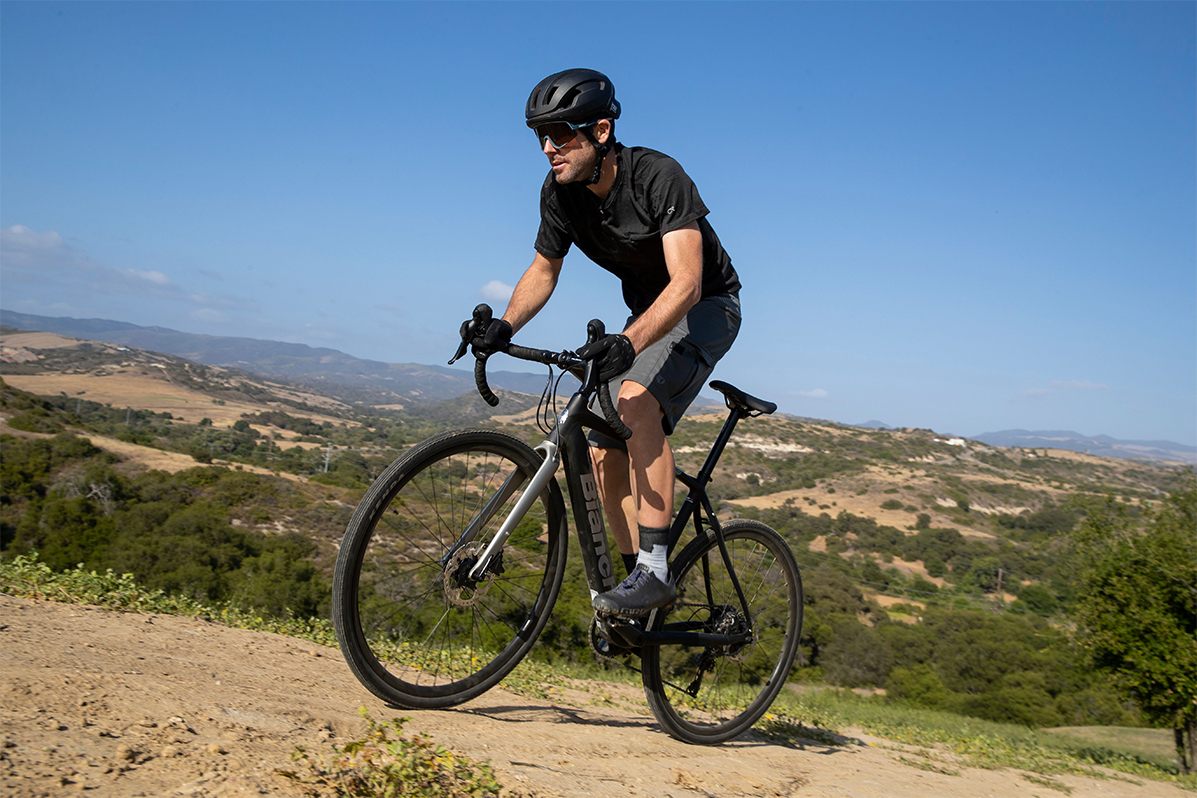 Cycling enthusiasts — at least those who are already indoctrinated into the sport — will likely continue to ride their traditional bicycles for fun. Brands like Bianchi will continue to build high-performance analog race bikes, consumers will buy them and they’ll still get raced by pros in the Tour de France (or by a dentist in your local office park criterium). But e-bikes will fill the role of commuters, grocery-getters and general transportation; hopefully expanding cycling’s footprint in American culture and attracting new people to the sport who previously never pictured themselves swinging a leg over a bicycle.

In no way does Hus believe that the rise of e-bikes signals the end of traditional cycling.

“We’re not obsoleting regular bikes, no way,” he added. “I’m not buying that.”

To punctuate his point that e-bikes are not cheating, Hus told a story about a friend of his in the bike industry who had a classic e-bike versus traditional bike confrontation while riding his local mountain bike trails.

This friend, he said, was riding an eMTB up a climb and caught someone on a traditional mountain bike. Instead of passing the person on the non-electric bike, this friend hung back and rode up the climb behind them. At the top, he complimented the person on the non e-bike for climbing well, which resulted in a retort many e-bikers have heard: The accusation of “cheating.”

Hus said his friend, a long-time cyclist and industry professional, shot back: “You know what? I’m not the cheater, you’re the cheater. You’re cheating yourself out of as much fun as I’m having.”