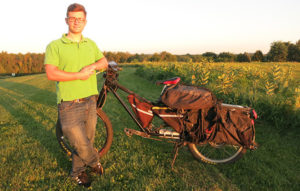 Why should you care about my Kentucky Fried fingers? 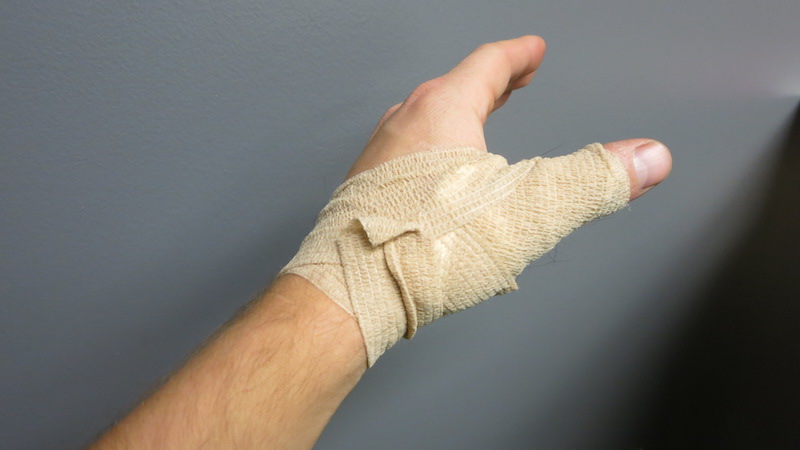 Well our bikes are a lot like our bodies. Over time they accumulate battle wounds, which tell the tale of our life’s adventures. As I ran my hand under cold water, I couldn’t help but feel frustrated at the inevitable scarring.

But what should I have done differently? Should I avoid the danger of cooking, or simply have been more careful?

Philosophically speaking, there are a couple of approaches here.  One option is to dread the passing of time and account for each passing hour as a step closer to an inevitable grave. You can view your life as a depreciating asset with ever declining value.

It’s obviously not a great way to live your life, but then it’s surprising how many people use this method to account for the value of any object in their life, especially an e-bike.

There is another option though; you can accept change and celebrate the journey that has brought you to this moment. You can choose to celebrate the imperfections as a badge of honor. 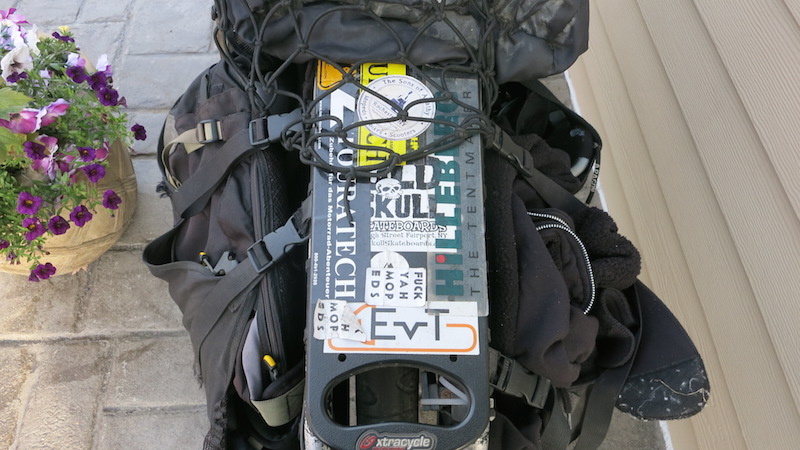 My ever-evolving e-bike sticker collection, sure it’s tacky, but it’s a whimsical way of celebrating the passing of time

As you might be able to surmise by now, my own e-bike (the ADV0 as I call it) is not terribly attractive. It’s a hodge podge, a prototype really, which has been patched together with different generations of e-bike technology.

If I were to do it all over again today it would obviously look very different (take a look at what we’ve been working on at Maxwell and you’ll see what I mean). Still, there is something that keeps drawing me to that trash heap. 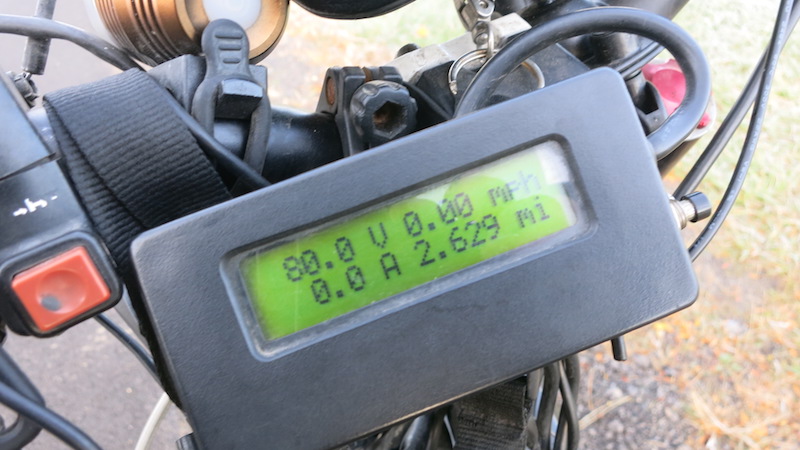 The OG first generation cycle-analyst which has accompanied my ebike adventure for 8 years.

Undoubtedly there is a sentimental attachment that I have to my unattractive ride. Over time, the bike has really become a reminder of the places I have traveled and the adventures that it has accompanied.

Of course there are the usual places and mundane things, the countless trips to work, grad school and errands around town. Even the everyday minutiae can be memorable on an e-bike; the countless trips in pouring rain and freezing cold, wandering through the abandoned subway tunnel downtown, and all the unmistakable confused glances that only an early-generation e-bike can solicit.

Still, the ADV0 has always allowed every day to become a memorable adventure. 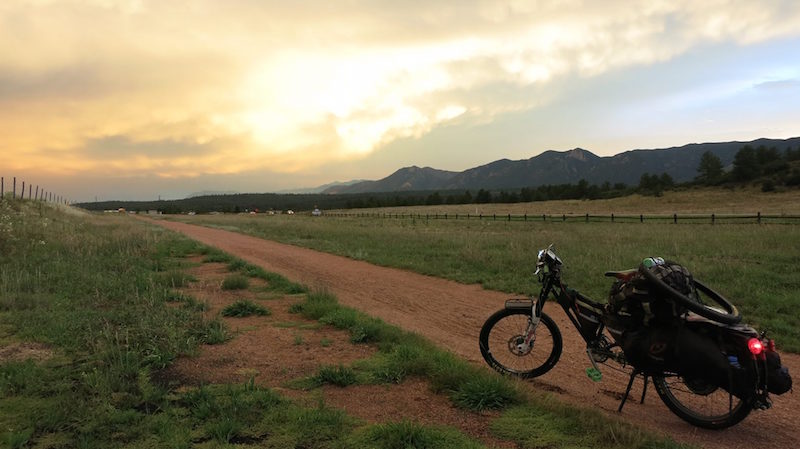 This picture just cannot do this Colorado sunset justice

When it comes to adventure, there is one that stands out. On August 1, 2014, I set out to break the Guinness World Record for the longest motorized bicycle journey. Over the course of 30 days I traveled almost 4,500 miles, self supported.

During this trip I traveled from Rochester N.Y. to Denver C.O. and back, all while camping and staying with friends. From the long days soaking up the sun and cruising through the forgotten back roads of Indiana to the virtually endless miles of rail trails in Nebraska, to the amazingly modern bike paths in Boulder, the memories that are now intimately attached to this machine.

Now, every time I grab the handlebars I’m transported back to these places.

All the while, the venerable ADV0 was indeed accumulating wear. My most vivid memory is just outside of Omaha, when it rained all day while riding through dirt roads.

The rain eventually let up, but by the end of the day my bike resembled a powdered donut. The silt covered everything on the bike, from the first-generation cycle-analyst to rear deck of my Xtracycle. Still, I couldn’t exactly be concerned with it’s appearance.

It looked great this way. Even though the dust eventually washed off, it made me realize how much better it is to own a bike that others might consider a trasheap.

Some marks narrate my triumphs and adventures, but much like the new sensitive new pink skin on my left hand, others serve as cautionary reminders. The two inch hole in the side of the my venerable circa 2008 era GoldenMotor hub is one such feature.

Just a couple of weeks back I was cutting through the abandoned psychiatric center on my way to work, when my rear wheel suddenly locked up. Luckily, I somehow safely arrived at stop with my feet down and assessed the situation.

As it turned out, the vibration from the neglected and pothole-ridden parking lot caused a hole to wear through the saddle-bag fabric which allowed a chain-breaker tool which it carried, to lodge itself between the disk rotor and the hub.

Not only did this lock up the rear wheel but also penetrated the side cover of the hubmotor. Undoubtedly, a valuable lesson about the location of anything in close proximity to a brake rotor. 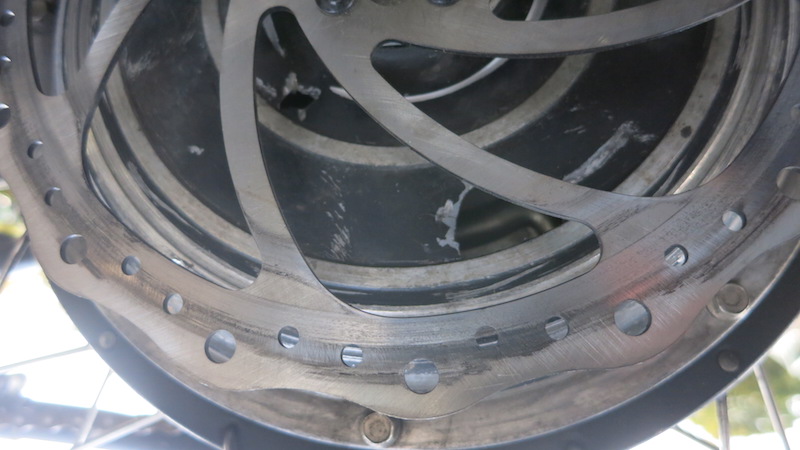 I’ve been meaning to add extra ventilation in the hubmotor anyway..

If you were to look at older photos of the ADV0, you will notice that some of the components onboard have evolved over time. The currently installed front forks, wheel and subframe serve as a reminder about road safety.

About a month before I set out on my Guinness World Record adventure, I had a bit of a run-in with a school bus.  Just as I started to notice the schoolbus in my periphery, It quickly dashed towards the shoulder.

The bus had turned down a side street, leaving me about twenty feet to stop. To put this in perspective, the rear wheels of the bus weren’t even passed me as it started to turn directly in front of me.

I grabbed both brakes with full force and went down. In slow motion, I watched the rear tire of the bus roll over the front wheel of my bike just inches away from my feet as I pushed myself away from it.

By all traditional measures, it would be time to get rid of this bike and move on. However, most of the components we’re still in great shape so why would I ignore this great opportunity to hold onto this great lesson: when it comes to brakes, go big or stay home. 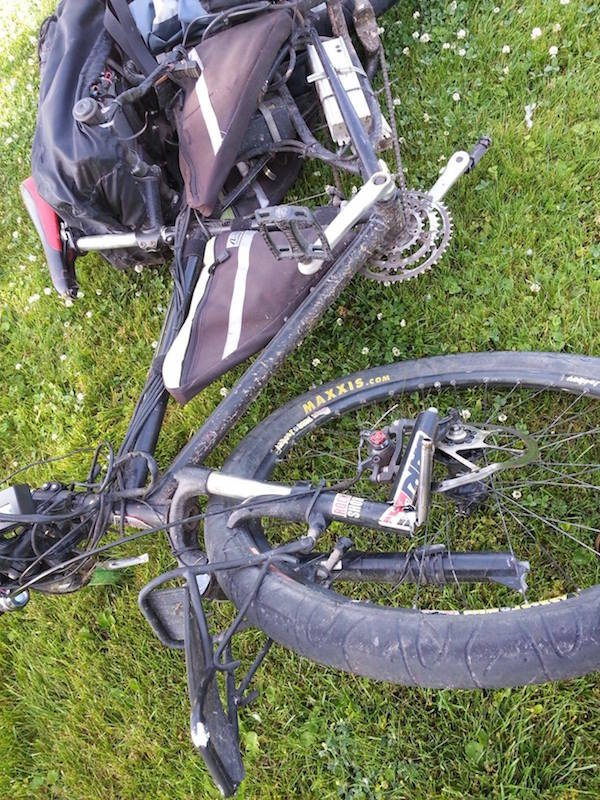 Character Building 101: your ugly bike says that you don’t give up.

Indeed, over the past 16,000 miles, my e-bike has accumulated some scars. Still, apart from the somewhat sentimental attachment to the device, there are some other great reasons for riding an ugly old bike.

For better or worse, today we live in an era where things change fast and desirable objects come and go very quickly. Partially, this is a function of technological change but it’s also a function of an insatiable need for new stuff in a somewhat overly consumerist society.

However, just like with ordinary bicycles, e-bikes serve as a great way to break free of that pattern. In an ebike there are virtually no wear-items short of the tires brakes, and in the long term the battery pack.

Virtually all other components can last indefinitely which is great news. It means that unlike a gas-powered bike, the machine doesn’t have to continually wear away to nothing.

Likewise, unlike an ordinary bicycle, the ability to ride much farther and travel further and adventure even more often. It’s no doubt that all this added utility and lifecycle will add some collateral damage when it comes to aesthetic.

Let’s celebrate the patina of a bike that get’s loved, because the cultural benefits of a bike that can literally last you a lifetime are worth celebrating. 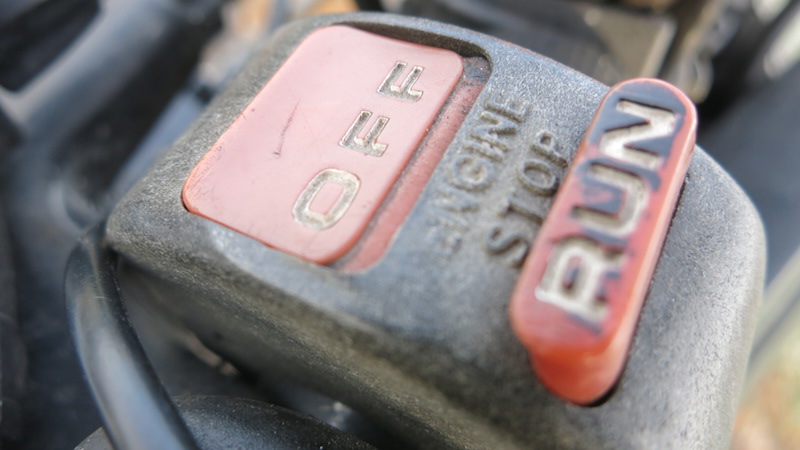 This run switch mounted on my ADV0 was originally installed on a 1989 Honda NX125. This 26 year old relic, serves as a reminder for perseverance and sustainability.

It’s no surprise then that I despise clean bikes. I don’t care if it’s a twenty-five-thousand dollar BMW motorcycle or a shiny hundred dollar commuter bike. If it’s too clean, then I’m a little weary.

My wife and I have a little inside joke. When we pull up to another bike of any type, and it’s well cleaned , primped and polished, I exclaim in a dramatic and awkwardly sarcastic tone “Wow, that’s embarrassing”.

While most people would no doubt be embarrassed to be piloting my not-so-luxurious and well-loved machine, I’m disappointed in those that never really get the chance to use their machines in the way they they ought to be.

There is a fantasy that I have where one day I’ll strike it rich and start a bike museum. Rather than a pristine artifacts preserved in a sterile academic environment, my museum would be a little more gritty.

Now imagine that there might be anything allowed in this museum from old Harley’s to modern full carbon road bicycles. The only stipulation for my imaginary bike museum would have is a minimum usage requirement.

You’d find rusty, broken, articles of passion that somebody really cared for, despite how they might look at first glance. It won’t be for everyone, but for those who really care about bike transportation, adventure and the journey, it will be perfect. 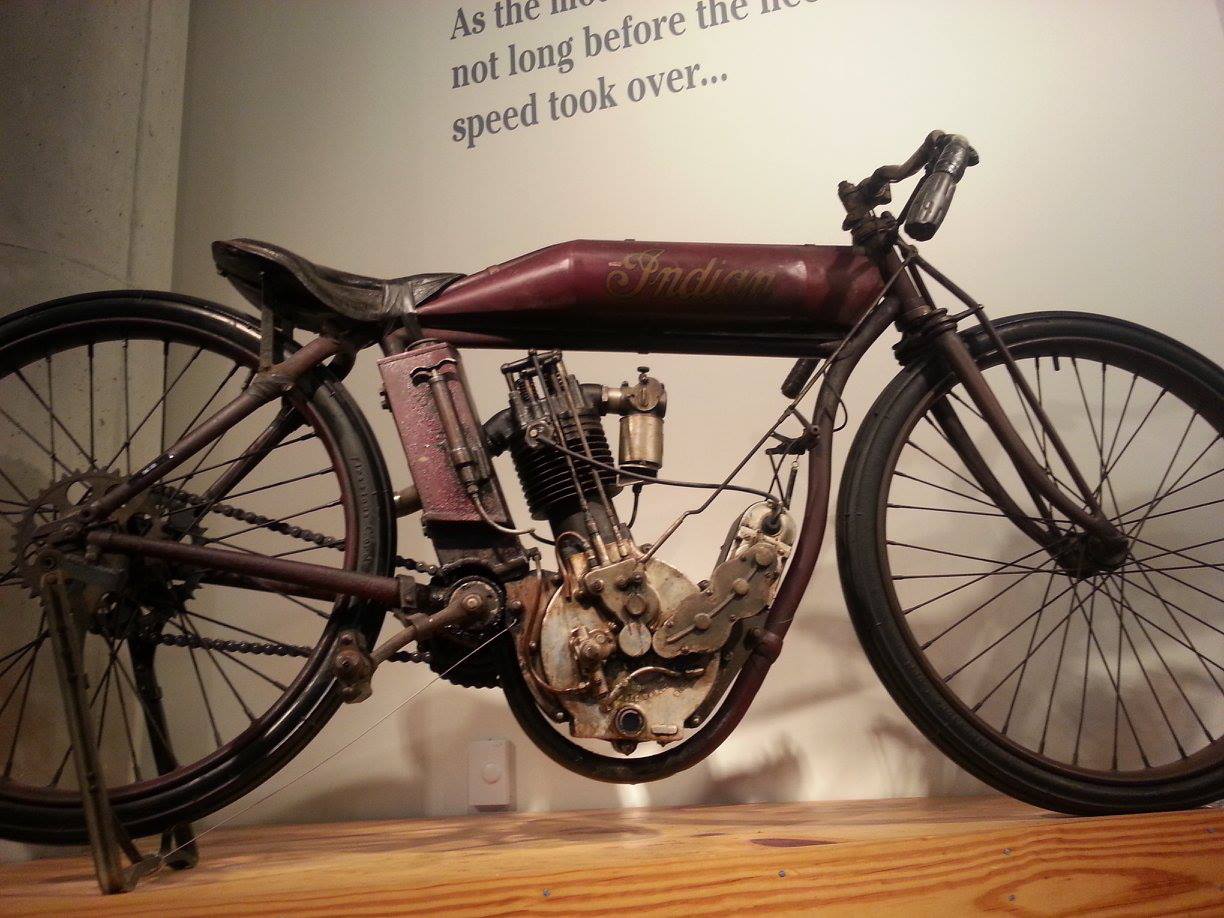 From the Barber Motorsports museum in Birmingham Alabama. Most of the bikes are just too damn pretty, but this early motorbike might just be loved-enough for my imaginary museum.

I often find myself shaking my head when I catch a discerning glance from a casual passerby as I ride my e-bike. Look, I know what my old, battle worn longtail cargo e-bike says about me. It says that I’m quite possibly, a vagrant… Still as the odometer churns, I can’t help but get more and more attached to it.

It’s not because it’s a technical miracle by any means and it’s certainly not because there is any aesthetic appeal whatsoever. It’s because it tells a story, it tells my story. 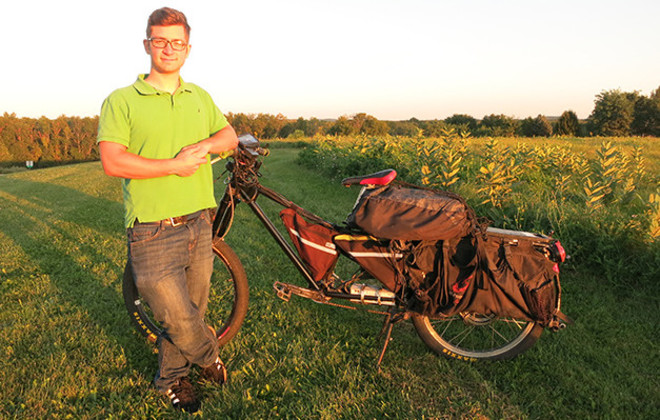