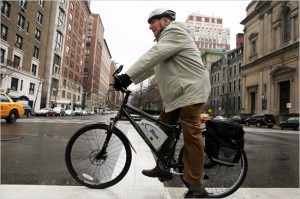 For a decade the New York State legislature in Albany has unsuccessfully debated one bill after another that would change that.  Now while that debate continues, at the other end of the Hudson River, a new ordinance approved by the New York City Council and signed by Mayor Michael Bloomberg has made e-bikes even more illegal.   (Can something be more illegal?)

But a closer reading of the New York City measures reveals that’s not at all the case. Besides tightening the definition of e-bikes, the new rules very clearly target one class of e-bike riders: commercial users, who consist primarily of food delivery bikers. However, the rest of the e-bike community is being caught in the crossfire.

In New York City pedestrians, automobiles, trucks, taxis, and bicycles all compete for overcrowded strips of asphalt.  Speed demon bicycle messengers and food delivery bikers had already been terrorizing the populous.  Then e-bikes came along.  And now, the restaurant delivery folks took to the streets on fleets of cheap e-bikes, sometimes ignoring red lights, riding the wrong way down one way streets, and even riding on sidewalks.  They were stealthy so you couldn’t hear them coming.  They were startling pedestrians, and even upsetting normally thick-skinned taxi drivers.

City Hall heard the uproar and responded.  The new ordinances give authorities the ability to fine riders and impound e-bikes. They can also be forcibly removed from businesses that have them on the premises.  But was that necessary? 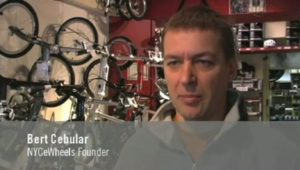 According to Bert Cebular, who owns NYCeWheels, one of the city’s biggest sellers of recreational e-bikes, even before the new rules, a city-wide campaign to get the delivery guys to straighten up and fly right was already having a positive impact.  Cebular says he’s noticed they are paying more attention to the rules, staying off the sidewalks, wearing reflective clothing, helmets, and sometimes even using lights.

The new city rules specify that bikes that can be motor propelled without pedaling are banned.  In other words, if you’re riding a pedelec you’re pretty safe.  But if your e-bike can be throttle driven without pedaling, you are running afoul of the new rules.

Since the new regulations specifically target commercial users of e-bikes, Cebular says the rules won’t hurt his business, but they are certainly making the e-bike decision confusing for consumers.

He points out that the new rules are going to be almost impossible to enforce.  First of all, how many policemen are able to discern the difference between a pedelec and a throttle driven bike?  Police are already at a disadvantage.  An officer on foot may not be able to outrun an e-bike.   Police cars are not as maneuverable as e-bikes.  And what happens the first time a police car or e-bike is involved in an injury causing accident because of a hot e-bike pursuit?  Cebular says, “We are going backwards with these rules, do you want an extra car on the road instead of an electric bike, just because of these Chinese delivery guys?”

Some critics worry that the new rules will discourage bike commuters, or Baby Boomers and seniors who want to use e-bikes to stay in shape. One critic of the measures said it’s a little like trying to deal with drunk driving by banning cars from the road.

The e-bike problem in New York is broader than food delivery guys.  It centers on the fact that e-bikes are illegal under state law.  There are currently two measures trying to make their way through the state legislature that would legalize e-bikes, basically putting into the state statutes the same language that’s in federal law, allowing e-bikes that have motors no bigger than 750 watts and capable of going no more than 20 mph on flat ground.

One measure, authored by Brooklyn Assemblyman Rafael Espinal is quite straightforward.  But the other measure, authored by Rochester Assemblyman David Gantt, who also chairs the transportation committee, carries some unusual restrictions.  It specifies that no one under age sixteen may operate an e-bike or ride as a passenger on an e-bike.  That provision would mean that it would be illegal for a parent or grandparent to put a child in a child seat on an e-bike, or even carry a child in a bike trailer.

Gantt’s measure also requires anyone operating an e-bike to wear a helmet, even adults, something not required for adult bicyclists who can go just as fast, or faster.   It’s a restriction opposed by many bike groups who see it as discouraging bike commuters.  Gantt told us he’s not just trying to single out e-bikers.  He’d like the provisions to apply to all bikers, but since this measure is solely focused on e-bikes, that’s where he’s beginning.

As to the matter of kids riding in bike trailers, Gantt acknowledged that no one had raised the issue and he would consider looking into a change that would allow for children in trailers.  As for the helmets, Gantt says he rides around with a handful of helmets in the trunk of his car which he gives to kids he sees riding without them.  His goal, he says, it to make everyone safer, but helmets for e-bikers would be a start.

Both Gantt and Espinal are hopeful their respective measures will become law this year.  Either measure would help clarify the use of e-bikes in the Empire State.  But for now, e-bikers in New York may just want to keep a copy of the federal law with them, HR 727, which specifies that when it comes to e-bikes, the federal laws supersede all state and local regulations.  So, if you do get a ticket for riding that e-bike, your best hope may really be to make a federal case out of it.

Thank you to Gary M. Kaye for this informative report on the electric bike scene in New York.