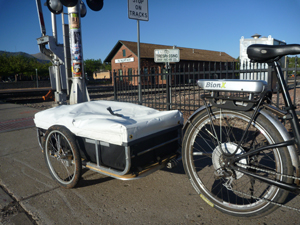 This is a guest post from my friend Josh Lipton at Wandertec.

The combination of electric bikes and bike cargo trailers for local errands and bike commuting is a great pairing.  The new Wandertec TUBA is a bike trailer ideal for local use and really works great for getting a lot done when hooked up behind an ebike.

While developing and testing the TUBA, I’ve used it to pretty much replace my pickup for small loads.  Hooking it up to my ebike, I was able to ride around at my normal speed despite carrying some very hefty loads.

Some of the most impressive loads that I carried with my Tuba/ebike combo were loads of sand and ice melt last winter.  I’ve regularly carried large amounts of packaging supplies to work.  And I’ve recently used the TUBA to bring home a large stack of moving boxes.

The size and variety of loads I can comfortably handle with an ebike and the Wandertec TUBA is equal and often times even easier than if I were to deal with the identical load by car.

Here is the official press release from Wandertec:

The Wandertec “Tuba” is for Car-Sized Errands

FLAGSTAFF, Ariz. – Aug. 20, 2012 – Wandertec, a leading online retailer promoting products for everyday bicycling, has announced a new bike trailer aimed at urban and suburban cyclists wanting to reduce or eliminate the use of the family car.

The idea behind the Wandertec Tuba is to provide the same level of convenience and spaciousness as a car’s trunk or backseat. Most consumer bike trailers don’t have this kind of space. So even the most dedicated cyclists have to fall back on using a car for very common load sizes. 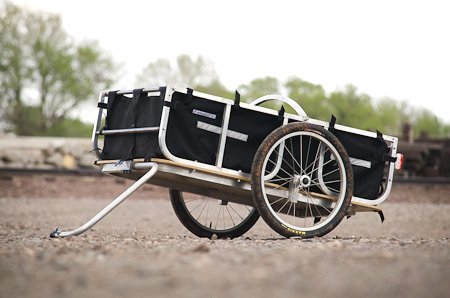 The initial funding for the Tuba is being provided by backers on Kickstarter. In a video on the Kickstarter project page, Wandertec president, Josh Lipton asks, “Where is the trailer for the minivan lifestyle — but without the minivan?”

Lipton, a lifelong cyclist, has designed several trailers, but his needs changed when he became a father this year. As a new parent, he and his wife began to use the family car more and more, and he realized the “trap” families fall into, in spite of intentions to drive less.

Lipton designed the Wandertec Tuba trailer to accommodate the needs of a mainstream family – but one that prioritizes pedal power over petroleum power. “I ride my bike a lot already. I always have,” Lipton says, “But with this bike trailer I hardly use our family car at all anymore.”

Here is the Kickstarter project page for the Wandertec Tuba.

Wandertec supports bike advocacy and education as the publisher of two leading Web sites on using bikes for everyday life:

What do you think?  Would a bike trailer like this help you with your errand running via e-bike?  Do you already use a bike trailer to run errands with your e-bike?  Please leave your thoughts and experiences in the comment section below.