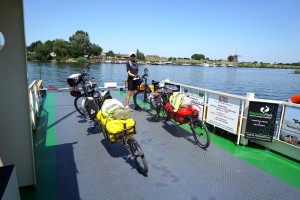 Twelve weeks and 6,400 kilometres after setting out to set a new world e-bike long distance record the time has come to look back at some of the more memorable moments we have and have not enjoyed as we have weaved our way through England, France, Germany, Switzerland, Austria, Belgium and Holland.

As we have discovered time and time again you never know what is going to happen next or what you will discover around the next corner.

In many ways it is the anticipation of the unknown that is the x factor that has us buzzing with excitement each morning as we prepare to set off on another day’s e-biking.

Time and time again we have been reduced to fits of laughter, have been totally bemused or have simply been left shaking our heads at the situations we have found ourselves in.

It is the anticipation of these moments, we have discovered, that has us determined to press on to smash the existing world e-bike long distance record of 16,047kms.

While cycling through rural Holland over the past few days we have been passing the time by compiling the following list of some of the more memorable incidents that have happened since leaving London on April 23.

1. Cycling into Strasbourg in France after a long day in the saddle we stopped by the side of the road to try to work out how to get to the municipal campground when a clearly very drunk beret-wearing Frenchman on an ancient  bicycle stopped to give us directions. Frustrated at our inability to decipher his slurred directions in French he gestured to us to follow him on his bicycle. What followed was hilarious … just picture scene if you can.  There we were following our new French friend at no more than 10kph as he swerved across the road, swore at motorists – while constantly mumbling to himself – and generally diced with death to lead us to our home for the night.  And the irony of the incident? The campground was closed for renovations and we had to cycle across the Rhine River into Germany to camp for the night!

2. The subject of a previous blog, another incident that had us both in absolute fits of laughter occurred on EuroVelo 6 east of Mulhouse in France. Cycling along at a steady pace, a very smelly dog poo momentarily stuck to the tire of my Haibike e-bike before being launched into the air. Unbelievably the aforesaid poo completed a triple somersault in the air before coming back to earth on the frame the bike. After screeching to a halt the offending poo, which was clearly very fresh and absolutely stunk, had to be somehow removed from the bike. In between bursts of laughter we eventually removed the offending doggy dooings with copious reams of toilet paper. What would the odds be for this to happen? 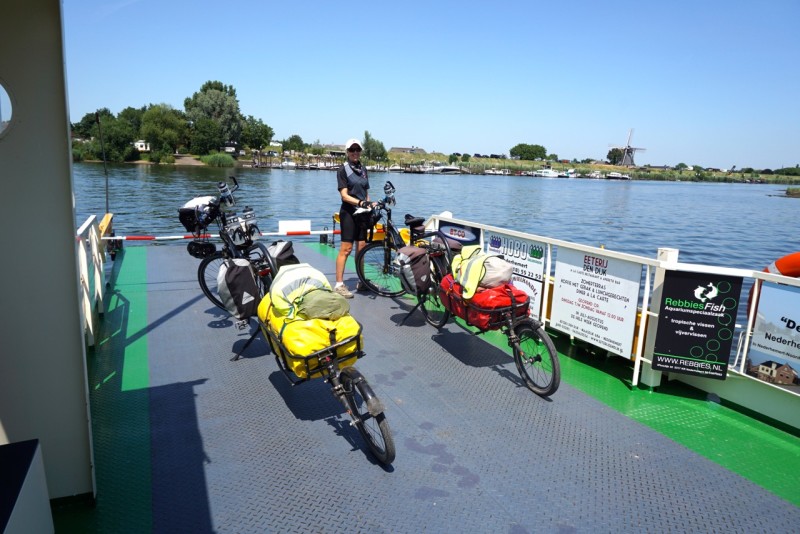 3. A clear number 3 occurs many times every day and never fails to bring a smile to our faces. Basically we still can’t believe the reaction of people as we ride past on our Haibike Trekking xDuro e-bikes while towing our Tout Terrain trailers. The sight is clearly without a word of a lie a showstopper, with people on occasions queuing up to talk to us about our trip, the e-bikes, the trailers and more. Given that we both love to wear bright colours, there is obviously no missing us. Add to that the interest people have in our attempt to break the world e-bike long distance record and our e-bike – trailer combo and it seems we are a scene-stealer.

1. A clear winner of the worst incident happened at a very seedy campground in Germany. Over the course of the past 12 weeks we have pitched our tent at all types of campgrounds and have generally been happy with the facilities provided – but this certainly was not the case on this occasion. Unable to find a campground at the end of a long day’s cycling, we were eventually forced to ask for directions – something we are reluctant to do for a variety of reasons. After another five or so kilometers of cycling we eventually found the place we had been directed to. In a word it was a dump littered with derelict caravans and structures, but with rain threatening we had no choice other than to call it home for the night. The cost for the night was 12 Euro that we discovered after paying gave us a toilet until 10pm at night, no shower and a locked toilet block in the morning. It is an understatement to say we were far from impressed.

2. Generally given the fact that we are cycling on dedicated cycle paths wherever possible we have been lucky not to have had any confrontations/traffic accidents. But that record unfortunately came to an end on Texel Island in the north of Holland when a hotheaded motorist tried his best to run me over. Despite being caught up in a traffic jam, the abovementioned motorist took offence at us crossing in front of his car at a roundabout. His reaction? He drove straight at me, knocked me off my bike and then tried to drive over my Haibike e-bike and Tout Terrain trailer that were lying on the ground. A sore back, a buckled trailer wheel and an ugly confrontation later he apologized and we were all on our way. Clearly it was far from a pleasant experience. 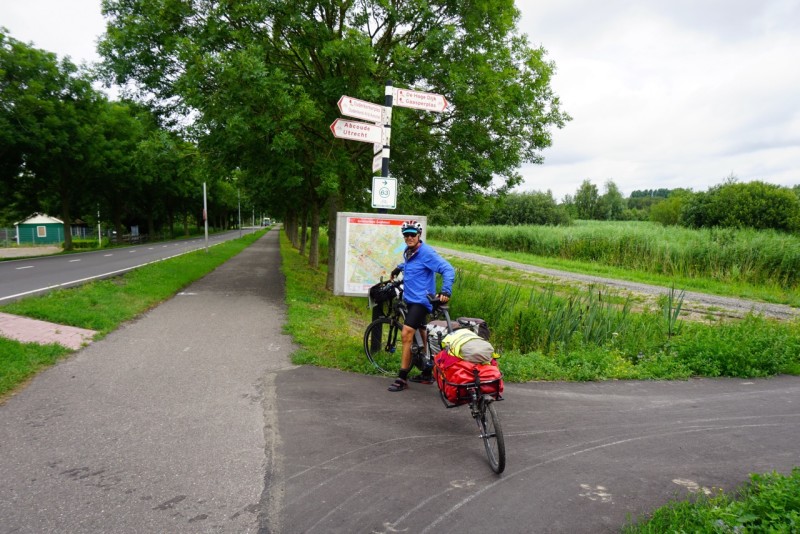 3. Another bad experience happened on our very first day on the road. Setting out from Aldershot in Surrey in the UK our target for the day was Newbury on the Kennet and Avon Canal. In the days leading up to our departure we had tried unsuccessfully to purchase the map we needed from Sustrans, so it was with much trepidation that we set off with printed Google maps – a very poor substitute indeed. You guessed it, we got hopelessly lost, ended up cycling on a major freeway and nearly quit the whole ride before we even got started. The lesson learned? Never go anywhere without adequate maps!

1. A clear winner has been the amazing scenery we have seen at every turn of the road since we set out from London on April 23. From the rolling hills of Devon in the UK to the stunning Loire Valley, Mosel River and Alsace wine region we have at times been unable to believe what we were seeing. Suffice to say Europe is an amazing place to cycle tour! 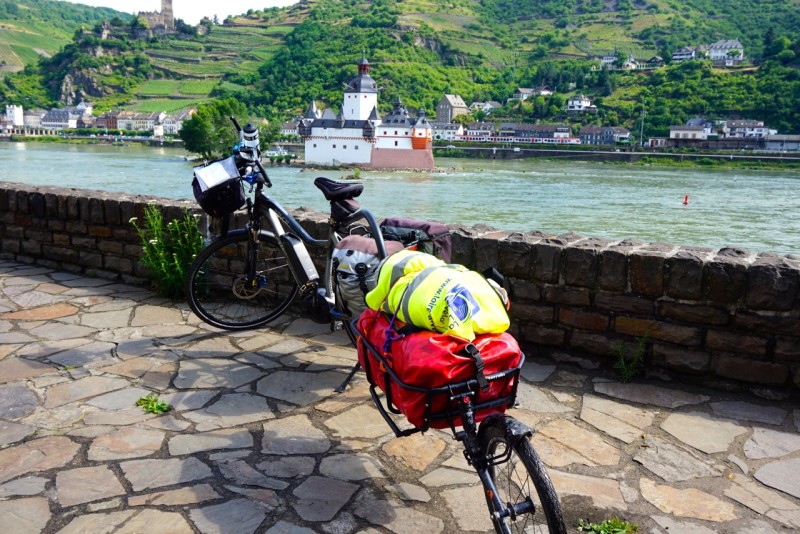 2. Any list of the best experiences cannot ignore the hundreds of friendly, helpful and hospitable people we have been lucky enough to meet along the way. There have been countless offers of accommodation, people have offered to ride with us to help us to get us on the right track and we have generally been overwhelmed by the interest in our world record. Basically whenever we have found ourselves lost or in some sort of trouble there has been someone there to offer assistance.

3. The freedom of cycling every day, seeing the best of Europe and generally being fulltime cycle tourists is a lifestyle both of us clearly love. It is a lifestyle that is an addictive drug and one that will be hard to come down from when it’s all over. 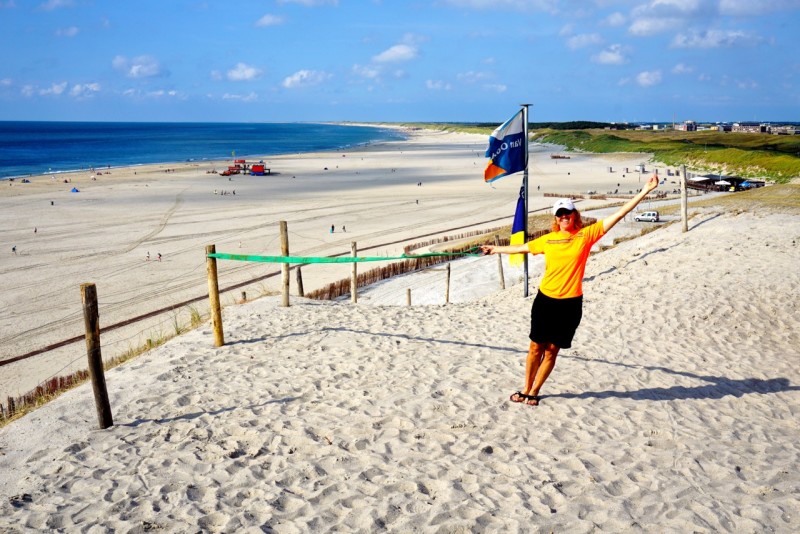