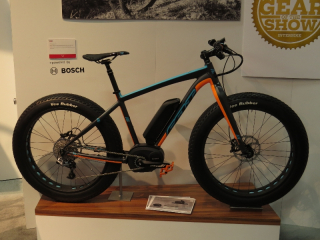 Make sure you also checkout parts 1 and 2 with more electric bike video coverage from Interbike.

Part 2 = Videos from Xtracycle (including an award from Outside Magazine), Yuba Bicycles, Juiced Riders, and NTS Works, BionX, and Falco E-Motors.

Ray Verhelst, CEO of Energie Cycles, talks about the improvements to the Energie Cycles electric bikes for 2014, including a carbon fiber 29er mountain bike with the new 500 watt Bafang mid drive e-bike system.  Energie Cycles is based in Las Vegas Nevada and they are assembling their bikes in a facility there.

Kyle Langdon from A2B shows off the new A2B line of electric bikes and talks about the Ride the Future Tour where Ben Hopkins set a Guinness Book of World Records riding an A2B Alva across the US. The bikes included in this video: the A2B Kuo, the A2B Alva, the A2B Alva+, the A2B Shima, the A2B Octave, and the F4W Peak and Ride.

Cameron Pemstein, President of Motiv Electric Bikes, shows off the Motiv Sleek and the Motiv Shadow electric bikes.  The Shadow is a new e-bike in their 2014 line.

When I was at Interbike, I met with Gaetano Sciacovelli from eScocialBike. eSocialBike is a diagnostic software for e-bikes that connects the bike to a cloud based system via a smartphone. The system sends diagnostic information from the bike to the e-bike brand and dealer. Overall it helps keep track of what is going on with the e-bike and improves the users experience. Optibike and DiaVelo (among others) will be using the eSocialBike system and you will probably see it on more ebikes in the future.

Remember to checkout parts 1 and 2 (if you haven’t already) with more electric bike video coverage from Interbike.

Part 2 = Videos from Xtracycle (including an award from Outside Magazine), Yuba Bicycles, Juiced Riders, and NTS Works, BionX, and Falco E-Motors.