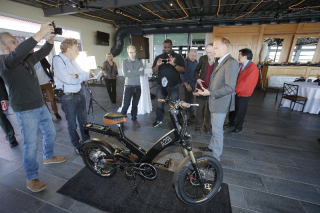 The A2B electric bikes are back with speeds of up to 28 mph and stated ranges of up to 40 miles!

HERO Eco Group recently acquired the A2B bike line and they are in the process of relaunching the updated A2B bikes around the world.

A2B has been busy with recent launch events in Germany, the UK, New York City, and a launch scheduled for END_OF_DOCUMENT_TOKEN_TO_BE_REPLACED

Here is a video from Jay Leno’s garage. END_OF_DOCUMENT_TOKEN_TO_BE_REPLACED