Elby is one of the latest new e-bike companies to make a splash in the e-bike world but they have an interesting background with BionX and the automotive industry.

This new Elby electric bike is a stylish step thru that has a well thought out design and accessory selection.

The step thru frame makes for an easy get on and go ride and the 48V 11.6ah (555 Wh) lithium battery is mounted low and centered to provide for good handling. END_OF_DOCUMENT_TOKEN_TO_BE_REPLACED

OHM Cycles has introduced their new 2015 electric bikes that includes their new XS750 Plus with 3.25″ wide off road tires & BionX D Series system.

The XS750 Plus and the XS750 both use the new BionX D series 500 watt motor that provides a lot of torque and is designed for off road riding.

OHM is still focused on commuter/touring style e-bikes too with their XU700 and XU700 LS (low step). Both of the road models also feature the BionX drive system.

Enjoy the following video and pictures of the these new OHM Cycles e-bikes! END_OF_DOCUMENT_TOKEN_TO_BE_REPLACED

The 2015 electric bikes are starting to roll out!

It features the new 500 watt BionX D Series rear hub motor that has 250% more power than the BionX P and S Series motors. 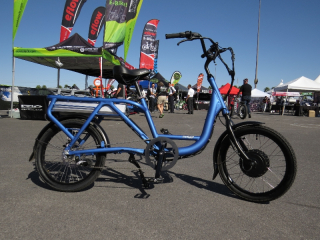 Time for more Interbike (largest bicycle tradeshow in the US) coverage of electric bikes!

This part of the coverage has a lot of focus on the electric cargo bike scene at Interbike.  There are videos from Xtracycle (including an award from Outside Magazine), Yuba Bicycles, Juiced Riders, and NTS Works.

Also in the mix are videos on the latest from BionX (D Series motor) and Falco E-Motors electric bike kits. END_OF_DOCUMENT_TOKEN_TO_BE_REPLACED