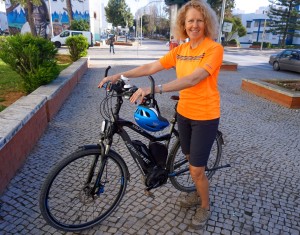 With 17,073kms on the odometer and the world e-bike long distance record now safely in our keeping, the e-Bike Cycle Tourists jetted off from Portugal to Cyprus in the eastern Mediterranean today.

But far from planning a holiday in the winter sun on the island that is renowned as the mythological birth place of Aphrodite, the plan is to continue e-biking on a daily basis to continue to add to our kilometer total while waiting out our European Schengen visa exclusion period.

While excited to discover everything that Cyprus has to offer over the next three months, we were both disappointed not to be able to take our ever reliable Haibike Trekking xDuro e-bikes with us.

Unfortunately due to recently introduced international airline rules, it is now illegal to fly with e-bike batteries, meaning that that we had no choice other than to leave our trusty steeds in storage in Portugal until we can return to reclaim them in May. 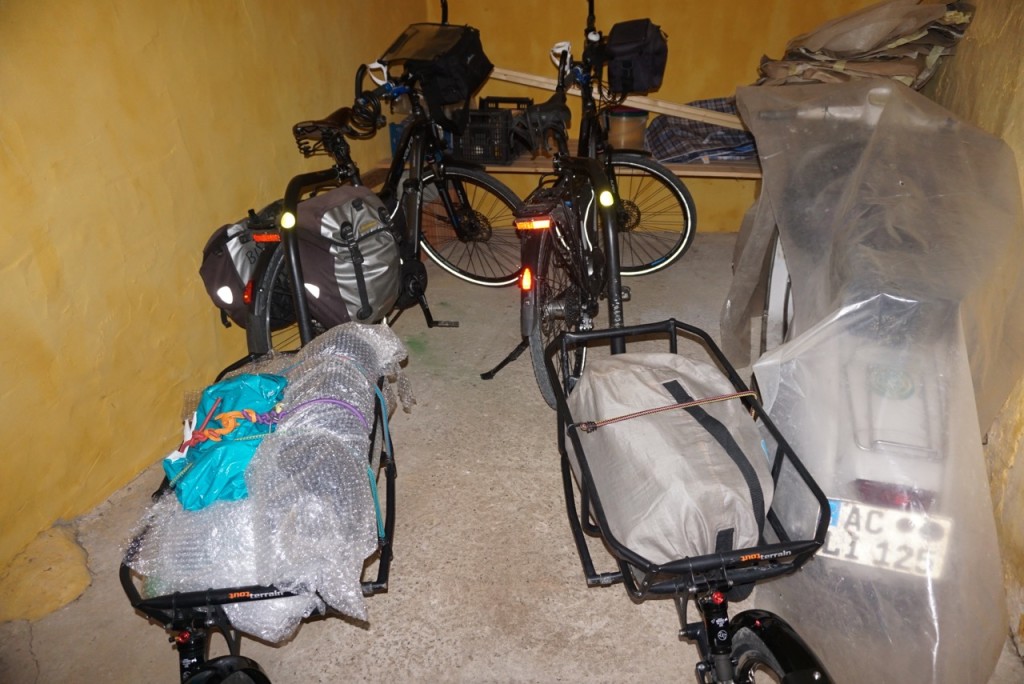 While we initially hoped to be able to borrow, rent or, as a last resort, buy two Haibike batteries, the extremely small number of e-bikes in Cyprus that use the Bosch power system meant this was not possible.

But as we have constantly discovered on this amazing e-bike adventure, things always have a way of working out, and that is what has happened once again, with Cyprus e-Bikes enthusiastically stepping in to fill the breach.

The result? We will be riding two Chinese-made e-bikes sponsored by Cyprus e-Bikes for the next three months, which will enable us to continue to add to our e-bike long distance kilometre total, despite the relatively small size of the island of Cyprus.

The experience of riding two totally different e-bikes from the Haibike xDuro Trekking models we have become so, so familiar with over the past nine or so months should also prove to be very educational, given that we had never ridden any other make of e-bike prior to setting out on this trip to be able to compare them to. 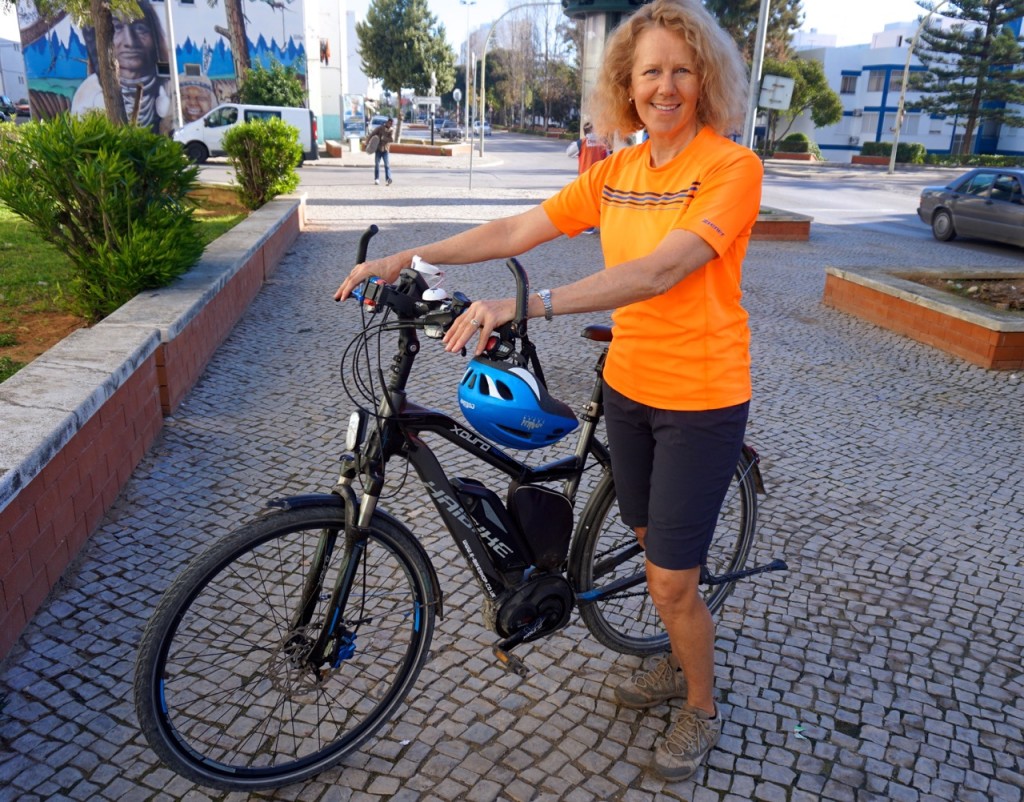 While it will be hard to beat the performance of our Haibikes, everything we have heard about the Cross, Practic and Gloria e-bike models sold and rented by Cyprus e-Bikes has been positive, so we are obviously keen to see for ourselves how they compare.

The plan at this stage in Cyprus is to base ourselves in three different locations for a month at a time starting in Paphos in the south-east of the island. From there we will check out other locations, with Larnaca and Nicosia high on the list of possibilities at this stage.

After three months and nearly 5,500kms of cycling in Portugal we were both sad to leave, it is without a shadow of a doubt one of the best cycling locations we have visited on this trip. 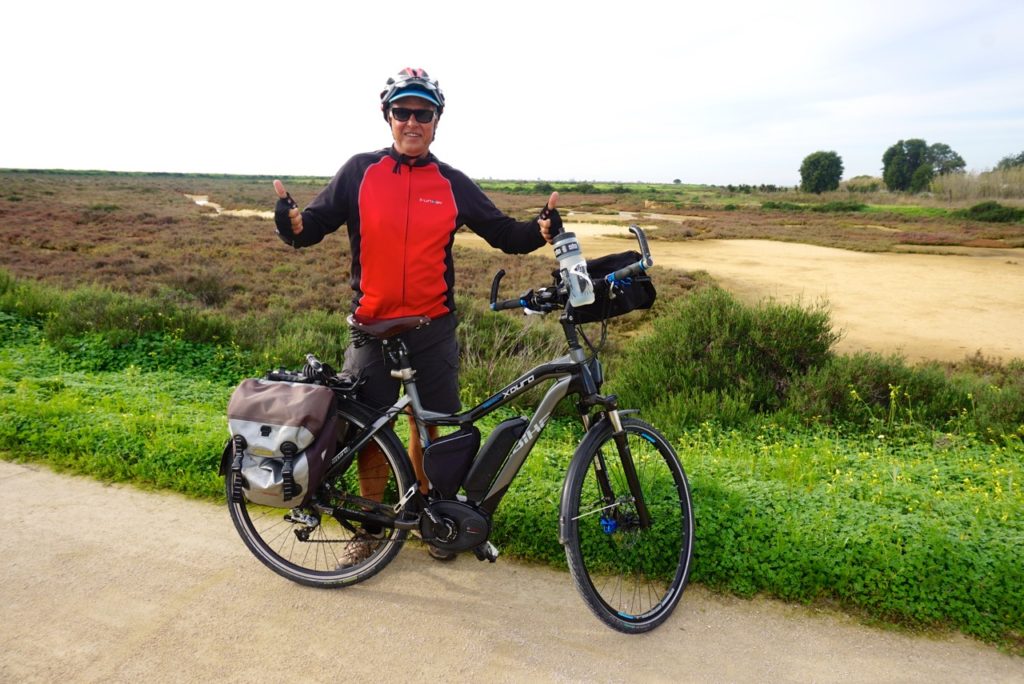 Basically the place has just about everything going for it for cyclists. During winter the weather is perfect – and I mean PERFECT – the roads in the hinterland are basically traffic free, not once did we have any problems with Portuguese drivers and best of all there are countless fascinating destinations to cycle to.

Also throw into the equation the many, many new friends we met during our time staying in Moncarapacho and Fuzeta and we felt as though we were leaving after years, not months.

Off to Cyprus and More Kilometres and Adventures

But off to Cyprus we are, with many, many new places to discover and adventures to unfold – that is, unless our ongoing battles with UK and European immigration officials get totally out of hand.

Given the number of times we have traveled between the UK and mainland Europe over the past nine or so months, the time we are spending in the respective visa zones has seen us flagged as “persons of interest” by the respective immigration officials.

As such we faced a long interrogation and were briefly detained in England en-route to Cyprus, even though we were only staying one night and could show airline tickets for the next day.

While all of our travel movements have been to the letter of UK and Schengen European zone law, we still had to prove that we had the financial reserves to support ourselves and had no intention of working for the remainder of our travels.

Even then we were told in no uncertain terms to expect even more questions if we returned to the UK any time soon – and to think as Australians we still have Queen Elizabeth as our Monarch!!