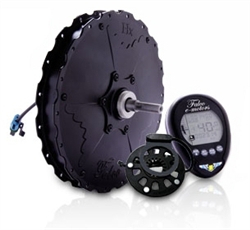 Falco e-Motors launches in the US market at the 2012 Interbike show.

This is a press release from Falco e-Motors.

Falco’s advanced systems are powerful, ultra-fast, and feather-light and embody simplicity for any bike enthusiast.

“We are very excited about the 2013 models of the Hx motor platform,” says Rakesh Dhawan, President, Falco e-Motors.

“There are significant improvements in the 2013 models. We have improved the torque and power delivery by 30%. Several of our customers have claimed speeds in excess of 50kph. Keeping this in view, we have significantly optimized the motor for high speed operation. 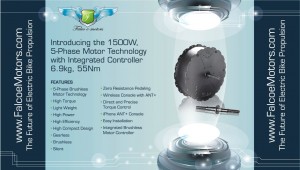 Several significant improvements have also been carried out in the ANT+ compatible wireless console.

Console interface is dramatically simplified with the incorporation of large buttons. Lock, Cruise, Turbo and Economy functions are significantly enhanced.”

Highly Compact design – Hx motors have embedded controllers and torque sensors that eliminate the need for outside components. 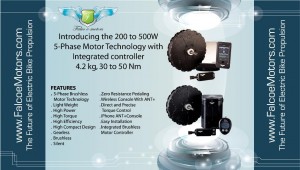 Direct and Precise Torque Control – The controller has 15 embedded sensors to measure the motor’s current, power, voltage, temperature, magnetic field and torque. Falco’s controller provides precision torque control of the motor to allow for an extremely smooth and exhilarating ride.

Zero Resistance Pedaling – Falco’s team worked tirelessly to ensure that the eBike remains super easy to pedal when it is off. They achieved this by minimizing the force of the magnets inside the motor to near zero when the bike is switched off. 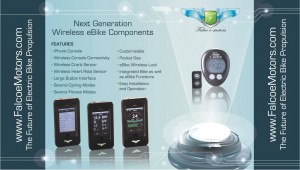 Wireless Command Console with ANT+ capability – Falco is the first eBike system with wireless ANT+ protocol in its command console. ANT+ protocol eliminates wires and provides the ability to interface with a number of other devices such as GPS, heart rate monitors, power meters etc.

At Falco eMotors, we have always dreamt of building the best eBike components and systems in the world with a perfect balance of design, style and unmatched performance. Falco eMotors symbolizes Innovation and Technological leadership.

Our team shares the passion of extraordinary excellence and pursuit of perfection. Precision, Innovation and Quality are the most prominent features of our philosophy. Unique products with a distinctive design and remarkable technical features are the result of extensive research and development.

Falco eMotors components are characterized by individuality and extraordinary technical performance. Our stringent quality management as well as intense test and qualification program guarantee highest customer satisfaction at all times.

The company’s overriding goal is to be a tier 1 supplier of eBike propulsion systems to eBike manufacturers worldwide thereby helping to make eBikes more accessible and exciting option for personal mobility, recreation, exercise, and commuting.

From the beginning, the Falco team included input from bicycle manufacturers, distributors and dealers in the development of the system. This allowed the diverse team to create a user-friendly eBike technology that meets the needs and interests of a wide range of electric bicycle companies in Europe, North America and Asia.