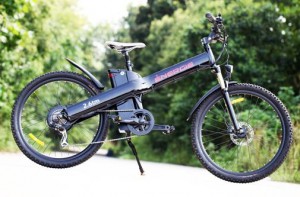 Las Vegas, NV, July 30, 2012 – Building on a growing trend around the world, the use of electric power-assisted bikes in North America have become an important transport alternative for urban commuters as well as the casual recreational outing for those less fit but still wanting to enjoy the neighborhood bike trails.

The parent company is Las Vegas based Rechargeable Power Energy North America LLC, who has developed this new line of premium e-bikes under the brand name énergie cycles which are based on a combination of dramatic angular frame designs supported by advanced engineering and include leading bicycle parts suppliers from around the world.

To clarify, an e-bike is a traditional bicycle with pedal power, gear shifts, hand brakes and spoke wheels that have the added advantage of an electric motor that supplements the rider’s ability to climb hills, ride longer trails and even commute without breaking a sweat. With certain limitations on motor size and speed (20 miles per hour max), these still retain the bicycle classification. While there is no license required, safety helmets and following the rules of the road are crucial to safe use.

With more than 29 million electric or e-bikes as they are often referred to, being produced annually in China, the CEO of Shenzhen B&K Rechargeable Battery, madam Gao Ping saw the need to bring a high quality line of lithium powered bikes to North America, and to do it in such a way that the line became a resource for jobs and American pride.

As one of China’s leading lithium cell manufacturing companies, B&K’s 5000 employees produce as many as 15 million lithium battery cells each month, including thousands of large high quality e-bike power packs for the Chinese market. 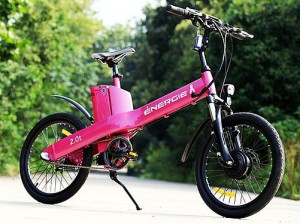 Energie Cycles 2.0t Special Edition. Some profits from the sale of this bike are donated to breast cancer research.

With such a direct connection to engineering and manufacturing teams both in Asia and now here in the US, énergie cycles has developed one of the most advanced power packs for this line of bikes. Using patented cell technology, they have managed to squeeze a 36volt 16amp hour LiFePO4 battery pack into the space of the smaller 36v 10ah typically found on other e-bikes.

According to Ray Verhelst, CEO and lead designer of the line, “The ability to provide over 576 watt hours of power to a Bafang rear wheel hub, one of the industry’s most advanced brushless electric motors means not only extended range but the torque to climb hills as steep as 26 degrees by throttle only.”

In addition to the larger battery pack, the new énergie cycles line has incorporated a number of enthusiast requested features such as the ability to connect and power your smart phone, an anti-theft alarm system, advanced LED lighting for visibility and a large LCD digital dash with accurate riding data. The engineers even went so far as to develop a new external battery pack that has an auto sense technology that switches from primary to secondary to almost double the ride distance.

The company feels so strongly about the detail and quality of the fit and finish that they are offering a 2-year limited warranty on everything including the battery pack.

The line includes 4 models and all will go through detailed assembly, advanced finishing and quality testing in this new 10,000+ square foot facility in Las Vegas and shipped to dealers throughout North America.

“While it is known that the majority of today’s leading production bicycles are produced in Asia, we know how important it is to bring American workers and pride back into the final assembly. Because of that, we will be building everything from the battery packs and wiring harness, to mounting all of the mechanical hardware right here with trained technicians” said Verhelst.

Another advantage that Las Vegas offers is that as the largest Trade Show city in the world, énergie cycles will not have to travel far to make its debut in booth #40099 at InterBike, the largest trade only industry bicycle show in North America at the Sands Expo center on September 19-21.

Consumers will get their first chance to demo the new line immediately after at the 5th annual Viva Bike Vegas event being hosted by the Regional Transportation Commission of Southern Nevada. The dealer demo van will be on display in the heart of Town Square all day on Saturday, September 22, 2012.