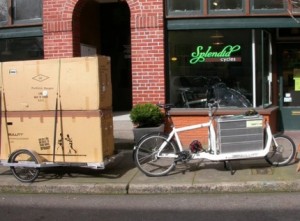 Greetings from Electric Bike Report!  Here is an electric bike news recap from the week of March 7, 2011.  Lots of cool stuff happening in the electric bike world; city officials riding electric bikes (with a scandal of course!), ebike sales up, tiny folding e-bikes, and more!

Time for the Electric Bike NEWS!

How about a cycling tour of Europe on electric bike?  A company in Europe is promoting e-bike tours as a way for everybody to enjoy touring the countryside no matter what their ability level.

Some city officials in San Francisco are riding electric bikes, but there is a scandal!  Apparently they received the bikes as gifts from mountain biking legend Gary Fisher and they did not report them.

This is a guest post from Paul (a member of the EBR community) about the problems he faces with normal transportation in the UK and his exploration of the ebike world.

Here is a nice article on a new electric bike store in Hatfield England.

Here is a picture of Steve, February’s Electric Bike Report T-Shirt winner, with his electric bike and trailer in Florida.

Electric bikes will be a big focus at the Taipei Cycle Show in Taiwan this year.

This is a video I put together going over the features of the Ibera PakRak rack and bike bag.  Full review coming soon!

People in Japan flocked to buy bicycles after the earthquake and tsunami stopped train travel.  Some of larger retailers sold out quickly.

Rural areas in England may see more electric bikes in use thanks to some potential government funding.

This Australian inventor has designed an electric trike for postal delivery workers.  I wouldn’t mind delivering the mail on this trike! 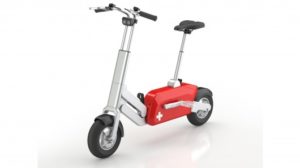 Check out this tiny little electric folding bike designed by a Swiss company.  It is called the Voltitude and it looks like it can be rolled just about anywhere.  The wheels are a bit small which can lead to a rougher ride than a typical 20″ wheel size found on most folding bikes.

The government in Malaysia may ban electric bicycles because they pose a safety concern.  While the transport minister mentioned in the article makes some good points, here is someone who suggests that they regulate electric bicycles, not ban them.