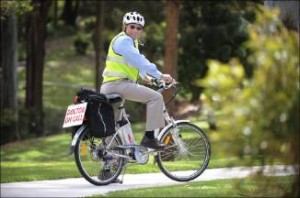 Well March has come to an end and there is some great electric bike news from this last week!  A little preview for you: A doc that makes house calls via e-bike, an electric bike sharing program in the US, the Google mapping trike, electric bikes to be a “major profit maker” in 2011, electric bike winery tours and more!

And now the e-bike NEWS!

This is great!  A doctor in Australia that makes house calls with his electric bike!  The doctor makes some great points about electric bikes.  Here is quote that I like: “I now have another reason to look forward to work and also have an extra hour of fun in my day.  People will think I am now starting to sound like a health nut or exercise crank but really when you try it, you’ll understand.”

Checkout this video with the Google trike that does some of the Google Street View mapping.  The video was from a community event at GreenTown Los Altos California that encourages people to ride a bike more for transportation.

And here is Google’s promo video of their trike:

“More than 30 million Light Electric Vehicles to sell in 2011. Major profit maker, worldwide.”  Are you a member of the electric bike industry?  Are you looking for in-depth market information?  You may want to check out the latest edition of Electric Bike Worldwide Reports.

I am really excited about the electric bike rental scene!  Here is a company that does electric bike tours in Lake Chelan, Washington.  They have put together a ride in the area that tours the local winery and includes a catered lunch.

Electric bike sales are on the rise in Germany!

This is an article from a writer in the UK that used an electric bike to commute instead of his car.  It’s interesting to see his perspective on riding an electric bike.

This is a press release for a store in the UK, Powerpedals, announcing that they are carrying Torano electric bikes.  The article has some good points about the benefits of an electric bike.