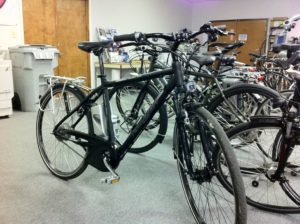 Well I am still playing catch up from the holidays and the traveling I have been doing recently.  So this e-bike news post might be a little late, but there is some cool stuff happening in the ebike world!

And now the electric bike news!

A race between an electric bike, normal bike, car, and a bus!  Which do you think won?

A new e-bike shop opens in Sacramento, California! The shop is called “The Electric Bike Shop”.  Here is the story on their grand opening.

And now for some bad e-bike news.  The electric bike boom in China is having some growing pains.

Interesting article on the history of the bicycle being used as transportation and an idea of how it can be brought back with “civil defense drills”.   Interested?  Check it out 🙂

Shortly after the Portland trip I headed out to Austin Texas to see what NuVinci is up to regarding their continuously variable drivetrain and e-bikes.  Check out the pic of one of the electric bikes I rode.

Here is an electric trike with a folding rain cover.  Cool idea, just wish it didn’t cost so much!

Article from National Geographic about China’s transportation issues and their movement towards greener ways.  E-bikes are in there 🙂

Here is a quick run down on what a hybrid electric bike is and why someone would want one.  I like the short and to the point descriptions!

This guy is ditching his car for at least a month and is using the Trek Transport + cargo e-bike  as his car replacement.

Last but not least here are some updates from Electric Bike Report: Part 1 and Part 2